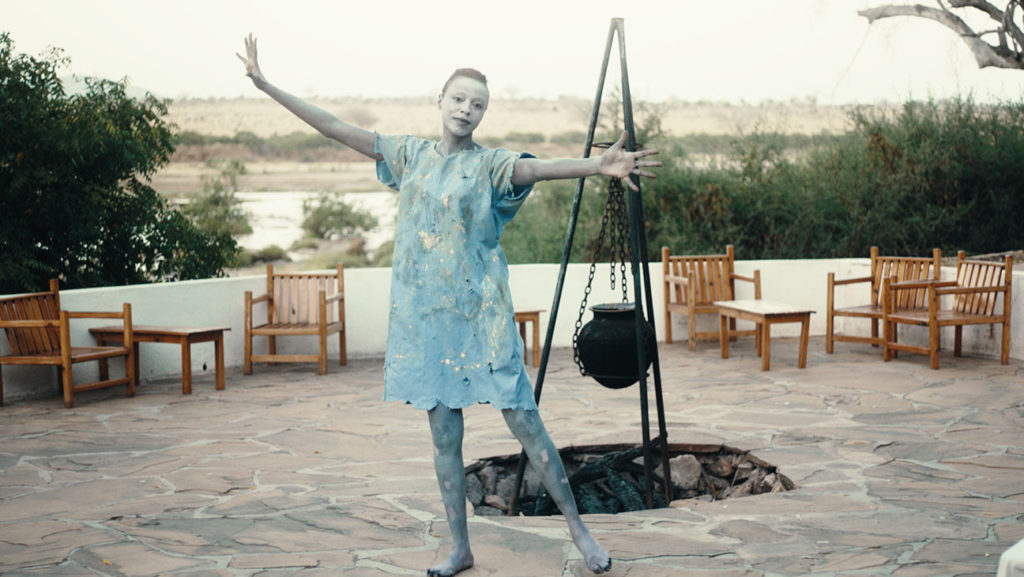 Mbithi Masya, a first-time director, is clearly confident behind the camera as he makes effective use of Godardian jump cuts, muffled sound mixing to exchange character perspective, and tactical production design—all together amounting to a rather stylized and opportune debut in Kati Kati (2016).

Kati Kati, with its delightfully short runtime of just over one hour and fifteen minutes, opens with a long shot of a woman clothed in a hospital gown standing alone in a field with no music and a blindingly bright white sky. This establishes the film’s general visual and acoustic style: minimal music, exaggerated whites, an economic camera that only shows what it must, and the brown wilderness backdrop just outside a small lodge in Kenya.

The woman, Kaleche (Nyokabi Gethaiga), approaches the lodge with the camera mysteriously lurking behind her shoulder as she walks through the lodge and to a small group of people. “Where am I?” she asks. The group hushes each other and a man responds: “My name is Thoma, and this is Kati Kati, and you are here because you’re dead.”

The guests arrive “on their own time,” as some exposition tells. Some died years apart from each other and yet arrived simultaneously. Once their skin starts whitening, their clock is ticking. Thoma (Elsaphan Njora) seems to have appointed himself as village leader, helping others, greeting the newcomers, and running the small lodge.

Narratively, Kati Kati is a sort of purgatory—that is, in the traditional sense of the word. It’s a place not between heaven and hell, but more of a pitstop for those destined for paradise that have some unfinished sins to confess (or purge). Mikey (Paul Ogola), for example, dies shortly after admitting to Kaleche he committed suicide. The film’s dramatic crux is centered on the unfolding of Thoma’s sin.

Kati Kati thrives as a thinly veiled political commentary. Just before Kaleche asks the group where she is, the group is playing a game that appears to be charades. The in-game imitator is summoning his inner Western movie star as he points a figure gun. The others guess “Bruce Lee” and “Rambo” just as Kaleche walks in. This, by exemplifying the pervasive influence of Western institutions like Hollywood, sets the stage for political interpretations.

Most blatantly, the characters don’t strictly die from the whitening of their skin as much as they just fade away into a sort of trance state. If we are to map or generalize the characters onto modern African politics (which is encouraged by the lack of last names, strict geographical identification, or even a year), Kenya is stuck in a sort of political purgatory where the “whitening” zombification of the characters embodies the long-term effects of Britain’s colonization. The heavy use of English, the language of Kenya’s historical colonizers, alongside Swahili only reinforces this interpretation.

The two most explicitly Christian characters, King (Peter Nzioki) and Mikey’s mother, seem stuck in Kati Kati. King plays a former priest who died in the 2011 post-election violence. His name and former vocation recall two of the three offices of Jesus in the Catholic Church: priest, prophet, and king. The other office, that of the prophet, King fulfills narratively. When Kaleche’s skin starts to blister with white, King, in words like a prophet, tells her she must uncover “why she’s here.”

In one poignant moment, Thoma, angry with King, says “ever since you got here, that whiteness has been spreading faster and faster.” Masya doesn’t shy away from claiming the church has been complicit in this “whitening.” Thoma reveals King lied about his death. He wasn’t simply killed in the post-election violence: he shut the church doors on his parishioners who were fleeing from the violence, effectively killing them. He was killed out of revenge. Thus, through King, the 2007-2008 Kenyan crisis—a period of political destabilization and violence—becomes married to the aftermath of colonization and decolonization.

Kati Kati is remarkable for the amount of its achievement in such a limited runtime. Not only does it provide a truly original fantasy premise that Masya executes with memorable stylistic flourishes, but it also looks into the soul of Kenyan politics and demands national and individual confession.