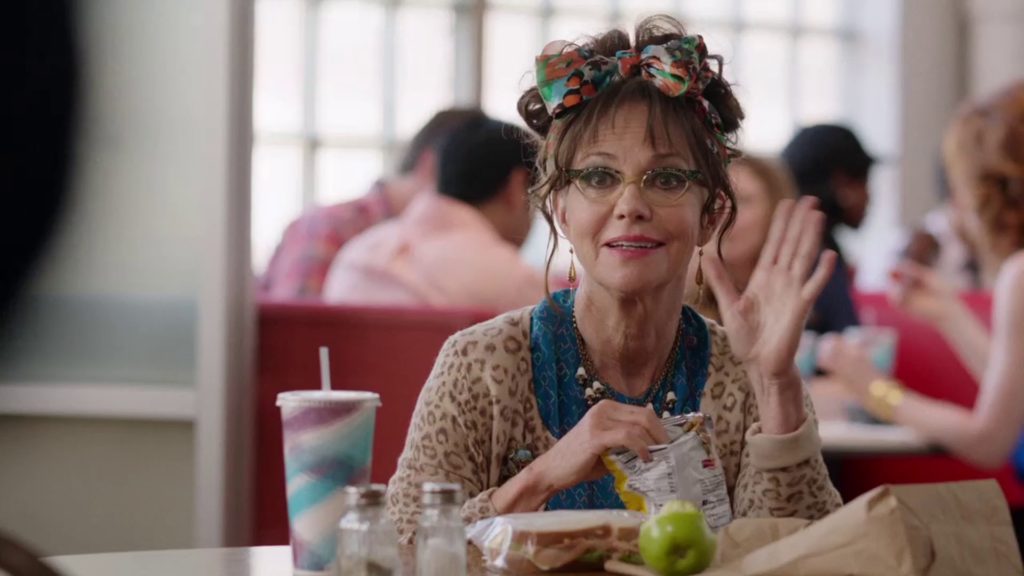 Hello, My Name is Doris is a delightfully quirky romantic comedy, perfect for a Friday night (or any other night) movie. Doris Miller (Sally Field) is in her 60s and has never married. She’s been living with her mother, who recently passed away. Trying to change her life through self-improvement videos, Doris focuses on just being who she is. She has a crazy sense of fashion, and adds bows to just about every outfit. She’s positive, even in the face of loneliness. New (and much younger) coworker John (Max Greenfield) starts work at the company where she has performed data entry for decades, and gives her someone new to be interested in.

Doris’ appreciation for what she has, as well as her sense of self and style, really made this movie for me. It’s true that Doris and her mother’s hoarding tendencies aren’t healthy, but Doris also stayed with her mother to care for her for much of her life, forgoing a chance at marriage and children when younger. I appreciate that this is a romantic comedy about a late-middle-aged woman who still doesn’t entirely know what she wants from life, and that is okay.

This indie comedy hits all the right beats during this time of crisis. Doris’s life is far from perfect, but she does her best. Her one good friend Roz (Tyne Daly) and Roz’s granddaughter Vivian (Isabella Acres) help her figure out how to hopefully start a romantic relationship with John. The results are hilariously awkward, as one would expect. Doris steps out of her comfort zone, and learns more about herself, even in the pursuit of romance.

Hello, My Name Is Doris is the bright independent romantic comedy we need right now. Sally Field’s performance gives this movie its spark; she’s charming while still being awkward, but also stays true to herself and her eccentricities. Her quest for love, even decades late, is pleasant in its earnestness. Doris is fiercely being herself, and seeking out what – and who – she wants to live her life to the fullest. Who can argue with that?