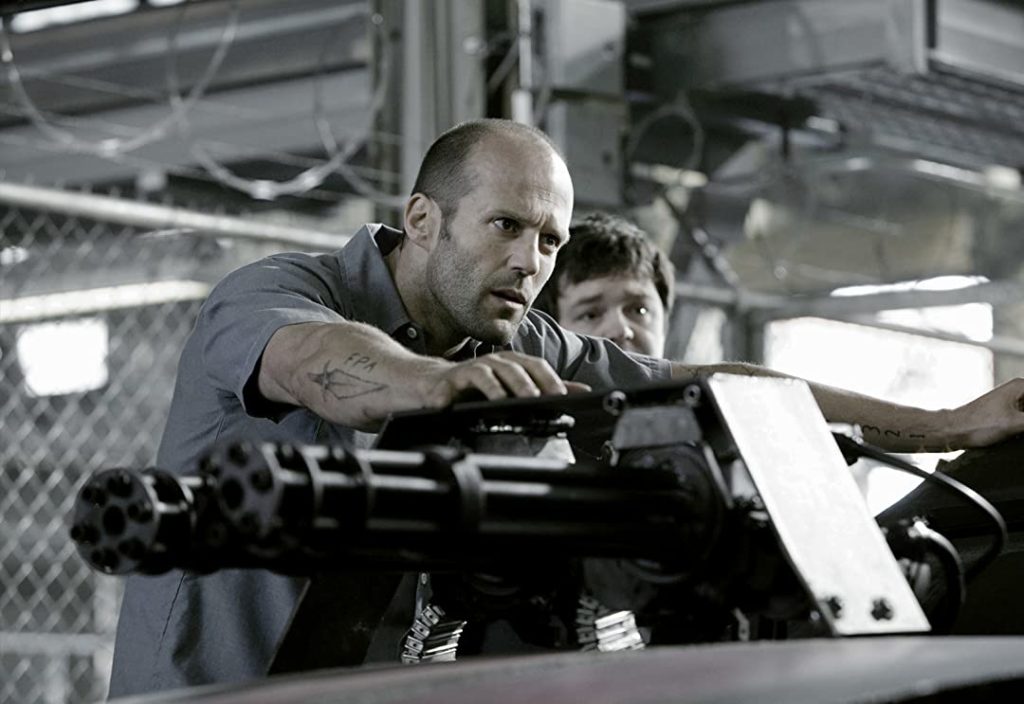 Jason Statham as Jensen Garner Ames before one of the stages of the Death Race.

Paul W.S. Anderson and his films have normally been viewed with a degree of derelict and disdain by most mainstream critics. Emblematic of his general unfavorability with critics is his Rotten Tomatoes page, where 2020’s Monster Hunter, at just 49%, is the least disliked of his 14 directed films. He’s not even the most critically acclaimed director with the name Paul Anderson (that would belong to Paul Thomas Anderson). Roger Ebert, often considered the greatest film critic, described Death Race as “an assault on all the senses, including common.”

But over the past half-decade there has been a mild critical reappraisal of his filmography. In 2012, Nick Pinkerton referred to Paul W.S. Anderson, and not Paul Thomas Anderson, as the “master” Anderson. In 2014, Scott Foundas defended him as a “vulgar auteur” in Variety. Letterboxd’s Neil Bahadur, one of the most popular and thoughtful off-beat users on the site, referred to Pompeii (2014) as “one of the finest spectacle-melodrama’s cinema has yet produced.” And most recently, in 2020, Mark Hofmeyer wrote a Rotten Tomato editorial entitled “Hear Us Out: Paul W.S. Anderson Has Been Crushing it for 25 Years,” where he reevaluated Anderson’s entire filmography.

These examples, while just a small sampling, attest to the increase in recent dialogue with a general posture of favorability toward Anderson’s filmmaking. And this reappraisal isn’t a complete coincidence. His more recent films, especially the final two entries in the Resident Evil franchise and Pompeii, have meritoriously forced a reappraisal of his earlier work.

Whether this is because his apologists have gotten sterner or whether critics are reassessing his earlier films after appreciating his newer works, it seems safe to say 2008’s Death Race—his next step after AVP: Alien vs. Predator (2004) and Resident Evil (2002)—can be viewed as a turning point of sorts. Or perhaps it’s more accurate to refer to Death Race as the evolution and solidification of his unique visual style.

Death Race, a spirited prequel to Death Race 2000 (1975), takes place in a dystopian American future where prisons have been completely privatized. With the privatization of prisons comes the Death Race, where the inmates at Terminal Island Penitentiary use custom war-prepared vehicles to compete in an all-means-necessary race while being broadcasted online. Most of the participants predictably die, but if one wins five races, prison warden Claire Hennessey (Joan Allen) claims, they will earn freedom.

Jensen Garner Ames (Jason Statham), a blue-collar worker being shorted on his wages, comes home from work one day shortly before a home intruder enters; his wife is murdered and he’s framed. Because of his racing history, Hennessey asks him to race as Frankenstein, a masked racer with four standing wins who didn’t make out of his last race. 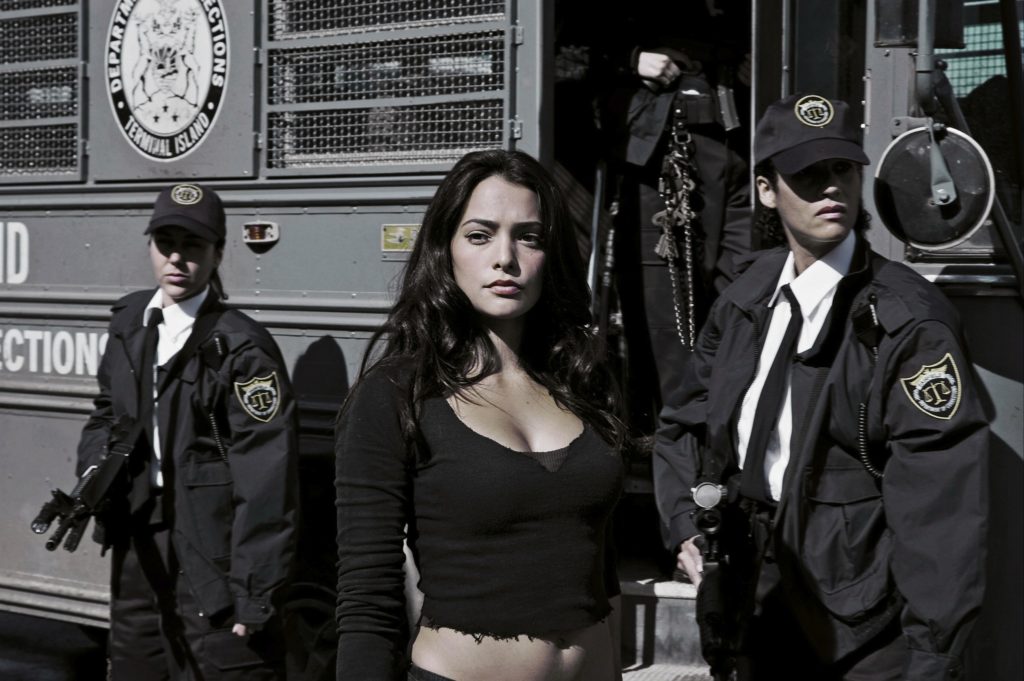 The visual mastery of Anderson arguably presents itself clearer than of his previous entries. He’s probably most frequently praised for his use of visual geography, spatial awareness, and architecture—all of which excel here. Compared to most car racing movies, the camera feels more fully aware of the geography of the track and the viewer finds it easy to differentiate between the different cars.

Architecturally, the typical openness of the racetrack is visually interrupted with obstacles and lugs of metal, all contained within massive armed walls. The contrast not only exemplifies the tension between freedom and captivity, but it also visualizes Hennessey’s intentions to never let any winner go free: the obstacles are all human-built (and CGI rendered), as are the cars, as is the race being televised. The only completely real things are the humans, the humans being imprisoned for societal entertainment. In this, the production and set design, paired with the cinematography, do the thematic heavy lifting.

Another stylistic element that comes to the forefront here is his frequent return to God’s-eye-view. In this case, the first instance of the God’s-eye-view introduces the prison which invites a corrective divine judgment on the established system. With a few of the kill shots also making use of the God’s-eye-view, Anderson illustrates a keen awareness of the technique beyond the typical blockbuster’s “coolness factor” version of the shot.

In addition to his visuals, Death Race delineates the advent of more complex narratives and thematic work in his filmography. His works before 2008, especially the first Resident Evil, have correctly been described as simplistic in narrative and theme. (Though a film’s simplicity shouldn’t automatically be considered a bane.) While Death Race makes no effort to hide Anderson’s discontent with unfettered capitalism, his thematic material is more complex than it’s often credited. More pieces are moving than just “privatized prisons are bad.”

The commercialization of, well, everything, is bad for the American civil future, according to Anderson. Hence, the Christmas references at the beginning that on a cursory viewing are easily neglectable aren’t aimless. In one action scene, Ames’s navigator Case (Natalie Martinez) says “Merry Christmas, asshole,” as she throws a lighter onto a car covered in gasoline, linking the commercialization of Christmas—a formerly sacred space distinguished from the secular—to the dystopian violence. Evidently, Anderson’s thematic work deserves more credit. 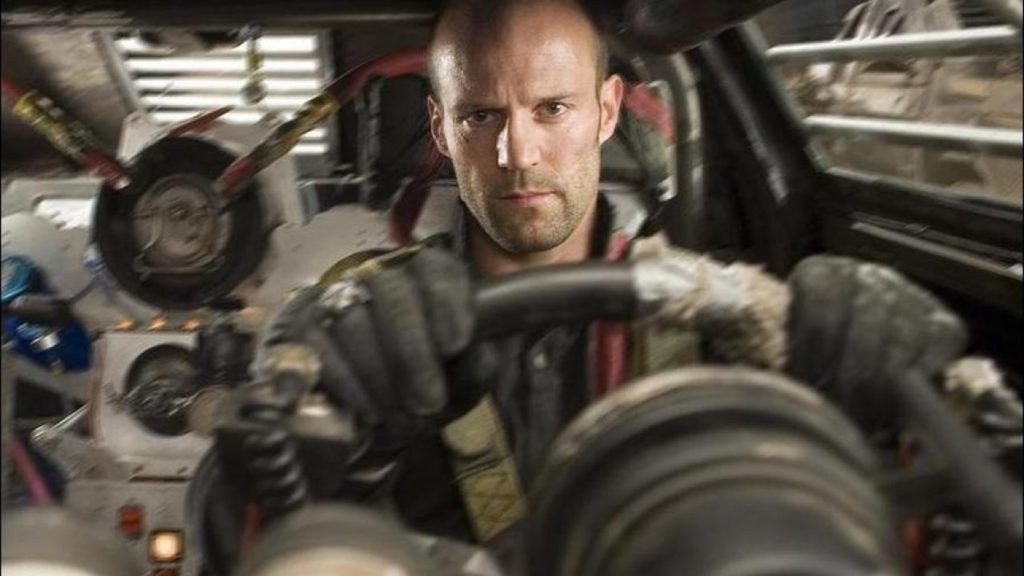 Early on, a character explains that women inmates at another prison work as navigators because the show needs its sex appeal to maintain its ratings. In this, Anderson has his cake and eats it too. But that’s the point: it’s almost as if he’s explaining to his viewers that if he doesn’t provide adequate sex appeal then he will lose viewer interest. The entertainment industry, out of a perceived necessity, commercializes sex. Although, by indulging in visual sex appeal through lingering shots in the action-genre preserved tradition of the male gaze (the women navigators certainly aren’t dressed in traditional prison attire), Anderson seems to be mapping the contemporary media landscape rather than polemicizing against it.

There are also racial politics at play. Machine Gun Joe (Tyrese Gibson), the highest-profile minority driver, also happens to be the only driver with a male navigator. Some drivers (and critics) think it’s because he’s gay, but it’s more likely, as hinted in dialogue, because he disposes of his navigators so frequently that the continual murder of female navigators would impact the ratings. Like his entire garage crew, his navigators tend to be Black.

The continual destruction of these Black bodies while linked to the United States prison system also illustrates how Black bodies remain capital in much of the American consumer economy. After all, when Anderson made Death Race, nearly 10% of all prisoners, disproportionately Black, were sentenced to privatized prisons which have financial incentives to keep and increase prison populations. In other words, Black bodies were capital.