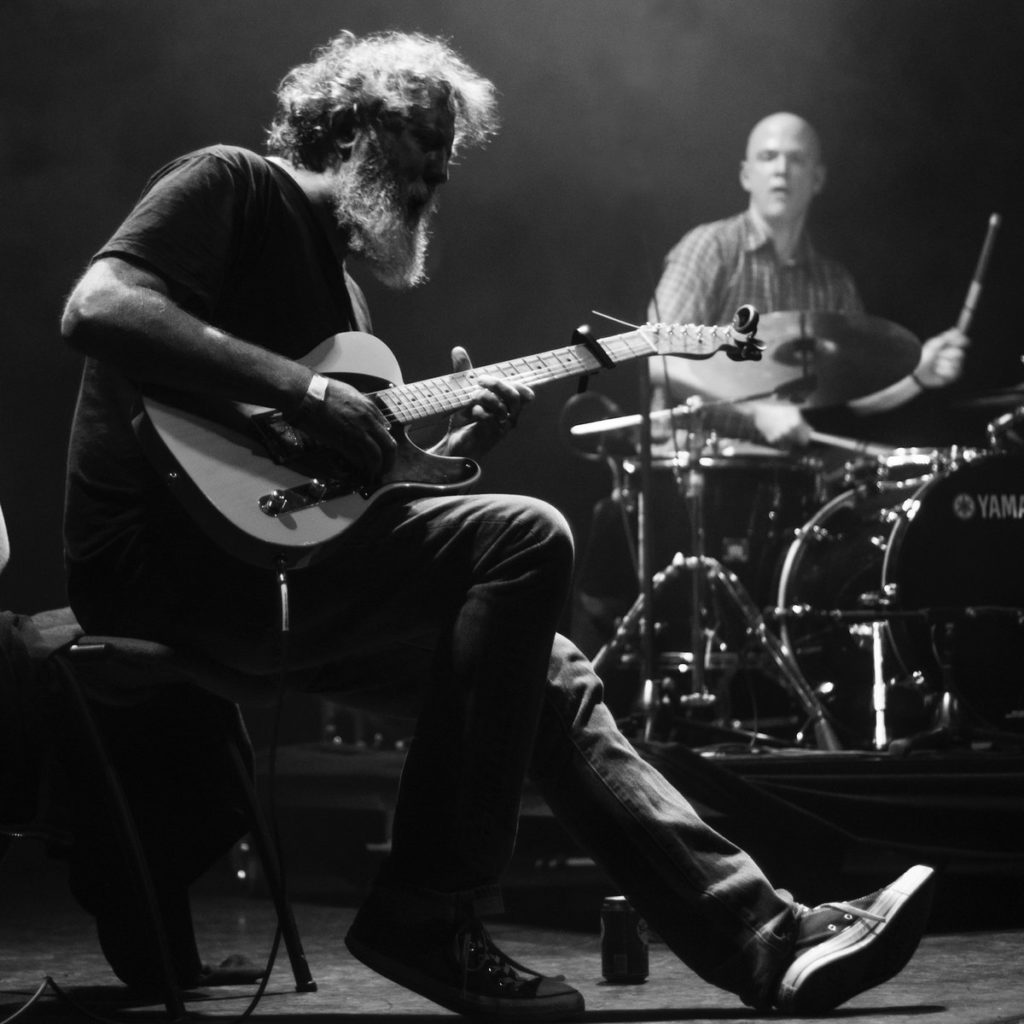 Orcutt and Corsano performing at Rewire 2019

Two musicians notorious for their history of brash experimentalism collide on Made Out of Sound, the result another exploration into sonic coloring, shifting harmonic tolerances, and enduring manic tonalities.

Chris Corsano and Bill Orcutt both exist on the fringes of the music world and have crafted their sounds there for decades. They began working together in around 2013, primarily playing live as a duo before releasing The Raw and the Cooked, a collection of untitled live recordings. The duo toured with a sound characteristic of Orcutt’s contentious style, a sound perhaps more unhinged than Corsano was then known for—they even managed to make an appearance at our very own Hassle Fest in 2014. Since then, they have worked together on two different LP’s, but Made Out of Sound is their first pure duo record since 2018.

Orcutt is known for being the guitarist in pioneer noise-rock group Harry Pussy, an influential underground outfit that, in its heyday, toured with Sonic Youth and pissed off a good deal of people with their outrageously abrasive sound. Following the band’s split, Orcutt made a name for himself as a solo artist with his distinctive guitar improvisation style. He has crafted an uncompromising sound of rogue, exploratory, and somewhat bluesy sentiments—a sound no doubt also shaped by his insistence on stripping two of the six strings from his instrument.

Corsano also boasts a long history with experimental music, having begun percussion work with free-jazz saxophonist Paul Flaherty in the ‘90s. He played drums for Björk on her Volta tour in 2007/8 and has recorded with a number of known free-improv and noise musicians such as Nels Cline and Merzbow. He has musical roots in the New England area, but has worked with artists all over the world, previously meshing with artists such as Evan Parker, Virginia Genta, Sunburned Hand of the Man, and Rangda. After listening to some of his collaboration with the saxophonist, Flaherty, it seems clear to me that Corsano is used to working with maniacal melodicists—he is obviously right at home with Orcutt.

Following the first listen through Made Out of Sound, I was left with one sure impression: This music is hard to get a hold of. The combination of these two artists, both fluent in their own modes of instrumental expression, makes for a somewhat ambiguous first listen. An almost complete disregard of conventional musicality makes the record feel untraceable, like one stretch of indistinct time full of musical colors that have bled together. Of course, there are some clear reasons for this amnesic perception (and a fair amount of intention behind them.)

To begin with, there aren’t many contrasted sections on Made Out of Sound to measure out the framework of a traditional song. Orcutt’s use of section repetition is almost non-existent. Though he does tend to linger on two-chord changes, once he moves on from one idea, he rarely revisits it. Instead, he continues forward into the new moments of improv, places that understandably require some adjustment to Corsano’s own flow.

Both artists focus on expressive freedom, something that can lead to them disregarding the expected constructs of songs, even improvisational ones. To further complicate things, Corsano hides his rhythms, sometimes pounding on his kit in an almost rubato style—an unnerving experience for people who are used to drums maintaining steady time in songs. This abuse of harmonic and rhythmic centers creates a void where listeners irrevocably rooted in seven-tone scales and Western theories of musical consonance become quickly lost among the disorder.

But something slowly appears out of the instability of this disorder—hints of form find places to hide throughout the record’s seven songs. Orcutt clearly takes influence from more traditional consonance on “How to Cook a Wolf,” which sees him throw loose folk-blues sounds over Corsano’s jagged beats. The effect is an extreme distortion of the original form. In some ways, this seems almost more appropriate to contemporary life. The sounds associated with blues and folk music have become things of comfort for many of us at this point, regardless of their origins. Like many things distorted by time, they appear almost purely reminiscent of some misshapen “simple past” ideal. Orcutt’s dismantling of the form comes off as an intentional update to account for all the additional ills of postmodern existence, something glaringly absent from the acoustic genesis of folk-based music styles.

More of Orcutt’s form-distortion appears on the opening track, “Some Tennessee Jar.” The song has the sonic movement of a wind-chime. It’s a rolling meander of vaguely familiar sounds—yet, somehow the title perfectly communicates the aural experience of the track. Corsano’s drums are less hectic than in other sections, recalling the thrum of the Earth and the passage of time required of the romanticism Orcutt brings out with his warm chimes. A landscape emerges between these instrumentalists, the gravity of the music fluctuating like a mounting wind before a rainstorm. It’s a strangely atmospheric effect, achieved in part by the asynchronous recording method that the artists used to create the song.

Much of this record gains its peculiar voice due to the fact that Corsano and Orcutt were isolated on opposite ends of the country during its creation. Since Corsano recorded his parts first, Orcutt was tasked with trying to keep up with the percussive stream. It’s a tough trick, with Corsano seemingly doing his best to shake the tones and rhythms that Orcutt overlays. Strangely, the performance comes off as natural, if a little more grounded than other collaborations between the two. Orcutt reportedly kept his eyes on the waveforms of Corsano’s drums in order to keep up with changing dynamics and respond in turn—it certainly seems like it paid off. One would be hard-pressed to imagine that the two weren’t in the room together, building sounds and matching energies in kinetic passages that seem impossible to contrive.

This album, perhaps all “free” improvisational music, is an experiential art form for the performer as well as the listener.  The artists in these recordings are manipulating the boundaries between ordered tones and rhythms; they are learning about their instruments; they are deep in the primary vortex that constitutes the unknowns of any creative pursuit. Made Out of Sound pulls the listener into the world of these artists with little sense of musical place or grounding to speak of. Foundations are torn apart either by Corsano’s rhythmic changes or Orcutt’s own ear for dissonance. Short-lived consonant platforms slowly become visible, and a kind of contest occurs between total chaos and the balance-beam performance required of traditional forms.

Where does rhythm begin and end in Corsano’s percussive storm? Where does Orcutt’s consonance become rational as opposed to irrational? There is almost no point in trying to parse these concepts. The ideas are inextricably woven together, the musical output more felt than fit for any sort of analysis.