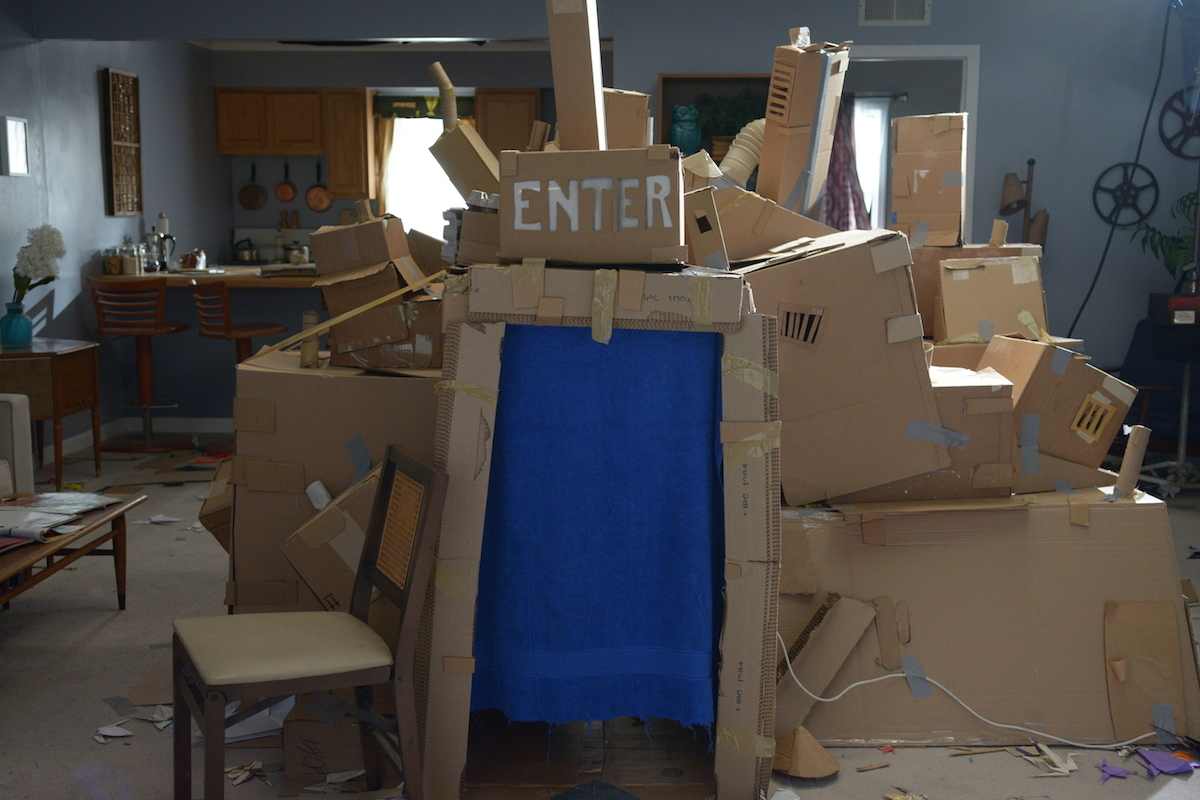 There is something overwhelmingly enchanting about Dave Made a Maze. Director Bill Watterson, for his first feature film, crafts a world out of cardboard, paper, and yarn in order to tell a story about the process of creation as well as the beauty of endings. As anyone who’s ever attempted to finish a passion project can tell you, the process is beautiful but rarely easy, full of roadblocks and self-doubt: being done with the thing is even harder.

The movie centers on the titular Dave, a slacker who can’t seem to get anything done. Annie—Dave’s more sensible girlfriend—returns home to find a cardboard fort in their living room. Confused, but not necessarily surprised, she attempts to coax Dave out of the fort. He responds mysteriously, saying that he’s lost and “it’s bigger on the inside.” The perturbed Annie brings in Dave’s best friend Gordon*, who in turn rounds out the cast by inviting several friends, a documentary crew, a homeless man, and a pair of Finnish tourists. As the situation escalates, with Dave refusing to exit, the whole group decides to go into the cardboard, discovering a living maze of unanticipated proportions and deadly booby traps. After the first death by cardboard—yes, you read that right—the group realizes that there is much more going on, and it’s going to take a bit more work and effort to escape the maze than they had anticipated.

The anchor to the whole movie, and what’s so memorable about it, is the cardboard scenery and practical effects that Watterson employs with enthusiasm. Paper cranes fly around in stop-motion wonder; heads come off in bursts of ribbon and confetti; and there is a room that plays with our perception of space onscreen. It’s a very unique and beautiful world to behold precisely because it feels so handmade and thought out. The movie reaches, by way of Michel Gondry and Charlie Kaufman, back to ’80s adventure movies of The Goonies and Labyrinth variety in order to craft something wholly original.

This cardboard world is one that you can’t help but be enamored by. Yet, the rest of the movie, by comparison, feels scattered and two-dimensional. It is bogged down by too many ill-defined characters and unfocused central metaphors; that is, the movie never really deeply explores any of its characters or themes. For instance, Annie and Dave’s relationship is meant to be a key emotional arc but is simply too underdeveloped. It ties back to their dichotomy—the only character traits we actually do know about them, that Annie is put together and Dave is a slacker—but overall, there never feels to be any real tension between the two. A weird sort of climactic scene, in which they pass back and forth different drinks and tear off paper costumes, comes off as unnecessary and a total block to the primary goal of escaping the maze. Especially since they work together and approach this same resolution in their effort to escape the maze.

The relationship storyline is but a microcosm of the movie’s problems. The tension is supremely surface level. Even as characters die, Dave and the main gang always seem safe, and there is never any expectation of an ending beyond the one that occurs. Likewise, the movie takes needless narrative and emotional detours. There’s a whole subplot in which another person is lost in the maze, unbeknownst to the group. The movie will return to his parallel story at the worst times, ruining important moments and disconnecting the audience. In full disclosure, I’m not even sure who this guy was, so that could be why I found his story so infuriating. Fortunately, the flaws aren’t especially terrible or too overwhelming. More so, they point to Watterson most likely starting with the visual concept of the whole thing and then working backwards to flesh out a story. The flaws of the movie reflect Dave’s central flaw: sometimes it started things it didn’t finish.

Pointing out the movie’s flaws is not to dismiss the work, but more to discuss what holds it back from being a classic, from being full of greatness. It is still wonderful to behold, because it is full of scenes and moments that are valuable and work. It’s also hilarious—especially in scenes with a mystical vagina or a high-five-loving cardboard monster. It’s a movie undeniable because its very soul, its chrysalis if you will, is executed so purely and presented so clearly in an ending that unifies this sometimes scattered work.

The group realizes that, in order to destroy the maze, they must first finish it by building a core to the whole structure. Fittingly, Annie and Dave build it together. When it is activated, it becomes a zoetrope, visually implying the practical effects built into the movie as well as the history of moviemaking in one scene. It’s very beautiful, and particularly memorable because it is so relevant to the movie’s thematic narrative and to Dave and Annie’s arc—she can’t help but be enraptured by something Dave has finally finished, and he could have never finished something without her. As the structure spins, casting a hypnotic display of motion, Dave can only save himself and his friends by tearing it down, his first finished creation.

Of course, just because it is destroyed does not mean it is finished. Even in this act of destruction there’s an inkling of creation. For to finish something is simply to let it out into the world, a monster meant for an audience. Similarly, with Dave Made a Maze, Bill Watterson has unleashed a cardboard monster, an inspiring movie full of enchantment and wonder.

* – Gordon is played by Adam Busch, who played Warren Mears in Buffy the Vampire Slayer. Come for the wonderful movie, stay for the startling realization that he’s actually endearing when he’s not portraying a psychopath full of toxic masculinity.