So much of life is pretending one is okay. It is a performance we all become adept at, at a certain age, where can hided our vulnerability and our loneliness. In most cases, what we present on the outside, whether it be a bright façade or an escape from the world, does nothing more than highlight what we are trying to hide.

“Why must we show that we’re hurting?”

In Karaoke Crazies, we follow the boss of the financially struggling “Addiction Karaoke.” To bring in business, he hires the quiet, video-game-addicted Ha-Suck to work as a “helper,” someone to sing and perform with the drunken, mostly male revelers who frequent the bar. Ha-Suck soon begins bringing in business through other … unconventional … ways. As the story progresses, two others join the group, and the dynamic of all four unfolds upon the backdrop of this genre-bending story.

The film opens with a whimsy (a whimsy very reminiscent of Jean-Pierre Jeunet) that is felt throughout the movie, and in it’s way, becomes a constant through the shifting genres and emotions of the film. Director Kim Sang Chan takes his cues from the overarching themes of life and death by alternating between comedy and drama, utilizing the contrast to bring together a variety of genres, including melodrama, thriller, fantasy, and comedy. The movie walks this genre/emotional tightrope very well for the most part, but perhaps not quite as well as in the penultimate scene.

In this scene, the boss confronts the “villain” of the story, a serial killer, leading to a showdown of sorts between the two. They meet by a reservoir at night, with no light but that of the killer’s motorcycle light. In a moment of deception, the boss handcuffs himself to the killer and the two proceed to fight, the killer unable to kill the boss and then have to drag him around and the boss resigned to dying if it comes to it. The scene as a whole evolves into the perfect balance of tense, violent, and hilarious (in a tone unique to the film but definitely reminiscent of the Coen brothers). It is an example of what the film is when it is at it’s best. 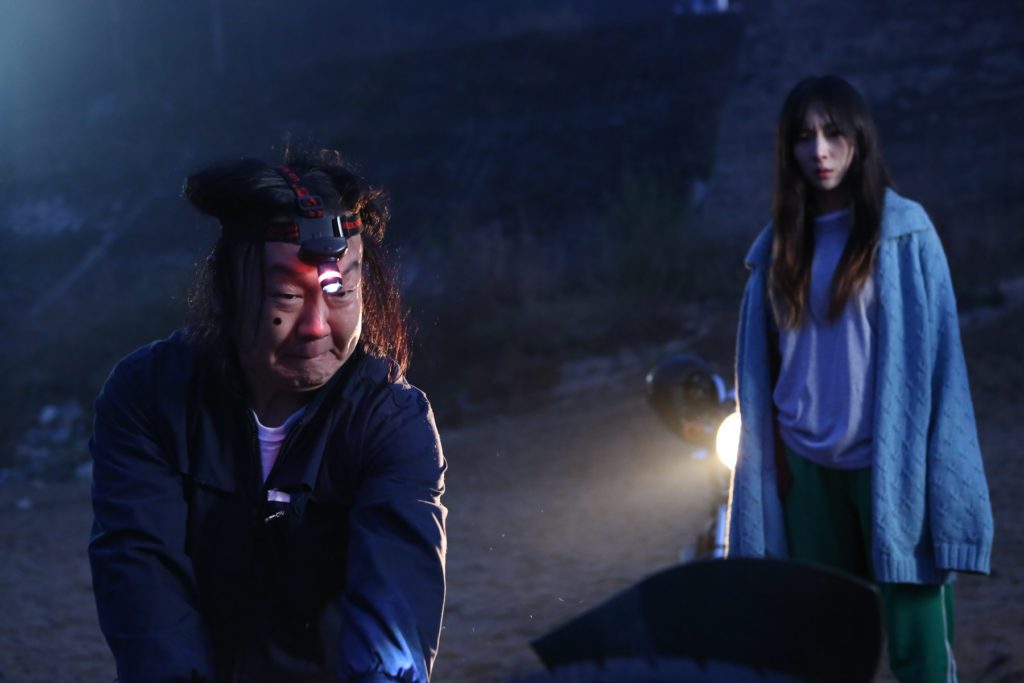 As in the scene above, this jump between genres and emotions works very well for the film, but as a whole, the film is sometimes hampered by exposition and backstories that are meant to serve to connect the characters to each other, while also providing an emotional backdrop for each character. These moments of exposition felt shoehorned in and ended up halting the film in unintended ways. The transition from melodrama to comedy to thriller to fantasy becomes hard to take in, to suspend disbelief for: the melodrama begins to feel cheesy and the fantasy begins to feel amateurish.

Very fortunately, and a credit to director Kim Sang Chan and the main actors, these halts and this chunkiness are easy to overlook.

Particularly, Kim Na-Mi as Na-Ju, from her first introduction, is easily the standout performer. She comes in as a second helper and serves as the foil to Ha-suck. Kim Na-Mi electrifies the screen, delivering her lines in a manic pitch, while also maintaining a depth to the performance. In one particular scene, a wigless Na-Ju argues with the boss about how they both overlook Ha-Suck’s obvious emotional trauma. Over the course of this delicate scene, a stripped-down version of other similarly raw scenes in the film, including the showdown described above, Kim Na-Mi wavers from accusatory to unflinchingly introspective. She not only reveals an intimacy to the character unseen up until this point, setting up later character development, she does it subtly and without obvious capital-A Acting. In this scene, for Na-Ju, there is no more performance, there is no more karaoke. And because of it, when we finally do get her backstory, no matter how ridiculous, it feels earned, in large part because of Kim Na-Mi’s performance.

It is these scenes of rawness that help punctuate the film in ways that stand out from the overall whimsy and help provide a realness to what is being shown to us. The whimsy is used expertly to comfort the audience in order that these raw emotions can resonate more potently. These punctuations are highlighted over the course of the film through characters asking each other, and the audience, questions that go unanswered.

Why aren’t you doing your best?

Do I look happy?

Why must we show that we’re hurting?

This rawness also effectively serves to evolve the dynamic between quiet Ha-Suck and electric Na-Ju into a literal interpretation of the overriding themes of life and death. Na-Ju aggressively seeks life, prodding and nagging for the group to leave the karaoke bar, while quiet Ha-suck escapes in silence and her videogames, attempting to all but remove herself from life entirely. One uses extroversion to hide, the other introversion. In fact though, all four in the group are hiding. This unifier between all four, their propensity to hide from life, whether from emotional trauma or from a specific person, builds quite confidently into the greater message: family. And fortunately, the four actors (Lee Moon-Sik, Bae So-Eun, Kim Na-Mi, Bang Jun-Ho) who round out this makeshift family succeed in making this film worth watching.

And so, why must we show that we’re hurting? So our family can support us so we may heal.

Rent it from your local video store, but make sure to bring your loved ones to the video store and also to watch the movie with them. Because movie renting and movie watching, like karaoke, is usually better when one does it with family.