Film festivals are, by their nature, about discovery – young filmmakers vying for their first moment in the spotlight, industry insiders scouting for the Next Big Thing, critics and audiences simply looking for something they haven’t seen before. But just as important, especially in underground or alternative festivals, is the thrill of rediscovery. Nobuhiko Obayashi’s Hausu, for example, made its local debut at the Boston Underground Film Festival in 2010, some thirty-three years after its initial Japanese release. Since then, it’s become a beloved touchstone for midnite movie maniacs and Criterion connoisseurs alike.

This year at BUFF, the big exhumation is 1973’s animated Kanashimi no Belladonna (or Belladonna of Sadness), and while it shares a homeland and an outré sensibility with Hausu, it is a very different beast. Directed by Eiichi Yamamoto (a veteran of Astro Boy and Kimba the White Lion), it tells the tale of a pair of newlywed peasants named Jean and Jeanne, struggling under the subjugation of their village’s skeletal, monstrous lord and his evil, calculating wife. After a particularly horrific encounter with the lord and his minions, Jeanne is visited by a wriggling, phallic devil, who sits in the palm of her hand and offers her power beyond her wildest imagination. She gives in – a little bit – and soon she and her husband acquire wealth, respect, and comfort. But with their newfound status comes greater torment from the corrupt local government, eventually leaving Jeanne no choice but to embrace the full scope of her powers. 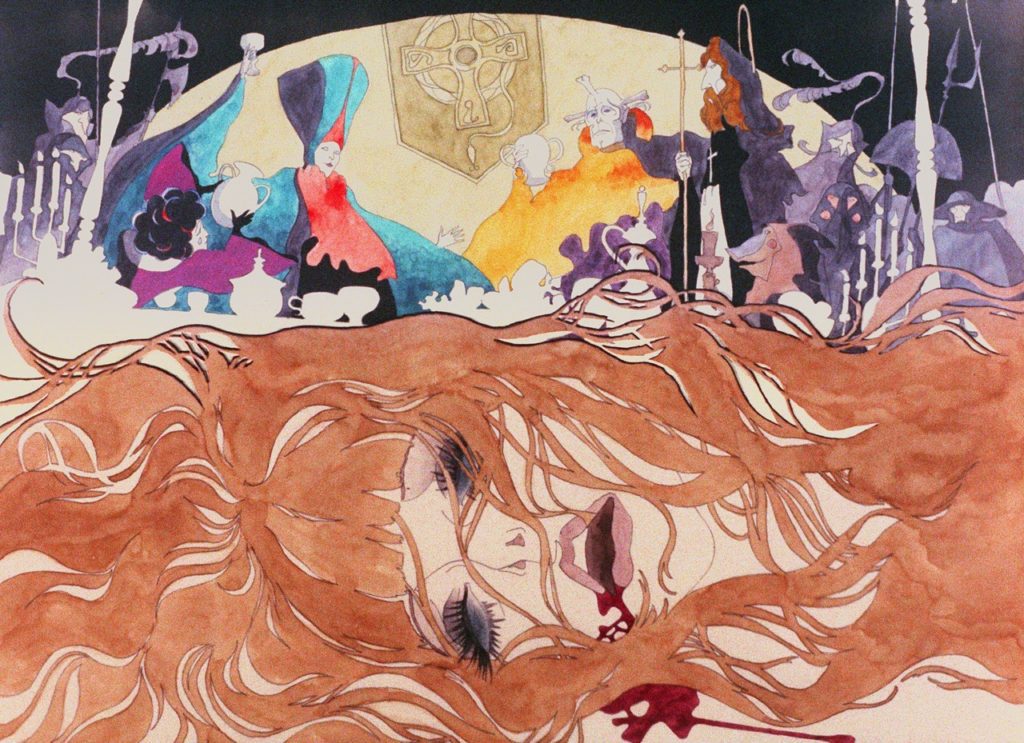 Any discussion of Belladonna will necessarily begin with its visuals. Simply put, this is a gorgeous film, largely composed of slow pans across still watercolors, and punctuated by vivid, swirling, and, frequently, distinctly anatomical bursts of animation. In keeping with its decade, the visuals owe a great deal to both Aubrey Beardsley and Peter Max, and nearly every frame would make an excellent poster – preferably hung in a room with a blacklight. Certain scenes, such as a Pop Art-inspired hallucination, seem to only have been included as an excuse for the visuals, but the visual style is so arresting that it’s difficult to care.

But while there are moments of outrageous humor (such as an orgy sequence that resembles Hieronymus Bosch by way of Gahan Wilson), the film is, in the parlance of the times, pretty heavy. Major themes include corruption, persecution, and, particularly, rape; in one horrifically poetic scene, the latter is visualized by the heroine being rhythmically split in two, as a swarm of red bats fly out of her nethers. There were fewer howls than I expected at Wednesday’s BUFF screening, the occasional noises of disbelief interrupting long, stunned silences. If Hausu is a party in movie-form, Belladonna is more like a ludicrous-yet-profound late night conversation after most of the guests have left.

The biggest surprise for me, however, was the subversive trajectory of Jeanne’s character arc. In her early encounters with the devil, she protests that her soul belongs to husband and to God, while he seductively tells her of the power that could be hers. But anyone expecting her inevitable bargain to lead to ruination, however, will leave perplexed. Satan does indeed give her powers, leading her to become wise, confident, and a beloved champion of the people, with no downside in sight. If anything, her embrace of the Dark Arts leads her to actualization and self-discovery, and is far and away the best decision she makes in the film. Like this year’s The Witch, this is a very devil-positive movie. 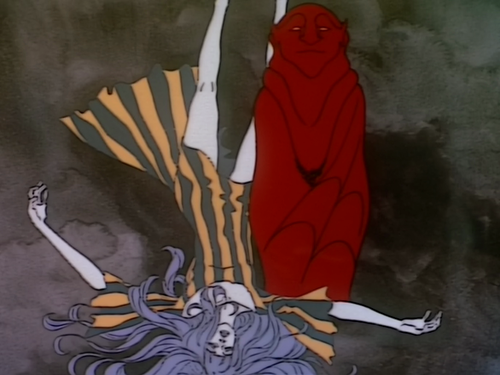 As one can likely infer, Belladonna is very much a product of its time, with its trippy visuals and progressive morals accompanied by a groovy psych-funk soundtrack by Japanese fusion great Masahiko Satō. Yet, like Hausu, it also feels remarkably fresh. In the forty-plus years since its creation, there has been very little like it – which is why rediscovery will remain just as vital to BUFF and festivals like it as discovery itself.