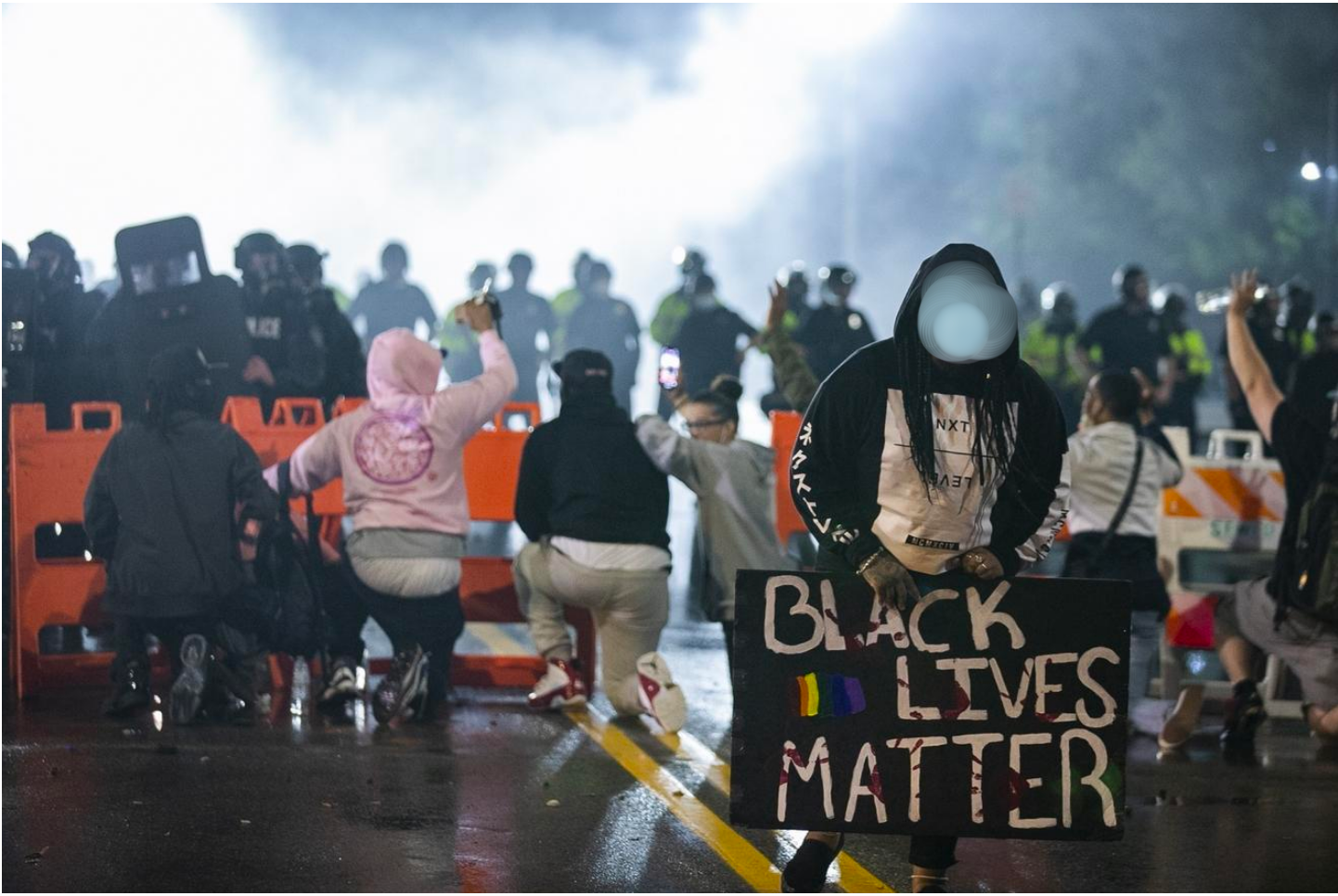 © Alyssa Stone for The Enterprise (edited by BH)

Last week, thousands of demonstrators assembled in Boston’s Forest Hills neighborhood to peacefully protest police brutality after the murder of George Floyd. The protest contrasted starkly with the violent clashes which, just days earlier, shook downtown Boston, and even included at least one successful de-escalation of conflict between the police and protesters.

In Brockton, a city 25 miles outside of Boston,  a very different story unfolded.

Around 5 PM on June 2, a peaceful procession held in honor of George Floyd began at Brockton’s West Middle School. Later that night, however, escalating tensions between protesters and Brockton police turned violent as officers began firing tear gas into the crowd and protesters damaged buildings. Windows were broken at the District Courthouse, a Dunkin’ was vandalized and set on fire, and even the National Guard was eventually called to Main Street, though official accounts are disputed.

This eruption occurred after protesters began to block traffic by kneeling on the street with their hands on their heads. One protester, recorded by a WCVB Channel 5 reporter, said the goal of kneeling was “for to take a knee with us.” This tactic has sparked some solidarity from police in Boston, but didn’t work that night in Brockton, and was denounced by Ollie Spears, one of the organizers of the rally. By 8:05 PM, Ollie wrote on Facebook: “The peaceful protest that I supported with Deja McCottrell is over and was successful. What is happening now including blocking of traffic does not honor the memory of George Floyd and others nor does it support the spirit of this event.”

Several accounts suggest that, during those intervening hours, protesters started throwing small objects like rocks and water bottles at police, who responded with tear gas and pepper spray. Witnesses reported the police even aimed at protesters who were unarmed or who were trying to leave the scene. Riots continued throughout the night in the downtown areas of Centre and Commercial Sts., near the police station, as police and protesters traded tear gas and fireworks.

“We can rebuild,” Brockton mayor Robert Sullivan said of the damage in a press conference the following morning. “But really it’s about rebuilding the people… We have to listen and learn. Change is coming.”

Events like these show how systemic racism is still a reality for people both within and around Boston’s borders. Partially due to gentrification in Boston’s neighborhoods, Brockton is another large city with a majority of Black residents, surrounded by small, predominantly-white towns like West Bridgewater and Easton. Large gentrification projects in traditionally-Black city neighborhoods like Roxbury and Dorchester appeal to wealthy white residents and visitors with money to spend, but they make living in the “new” Boston unattainable for the former residents who called those places home. And these groups are the bulk of people getting pushed out to other semi-urban communities like Brockton.

The fact that there was no mainstream media coverage of a Brockton protest the next night that remained peaceful, on the very same streets where violence had broken out twenty-four hours earlier, tells of an implanted, biased narrative on behalf of the press. Attendees of Brockton’s follow-up protest described how protesters and police hugged in the street, and it was described by some as an intentional move to highlight the harmonious diversity of the area. “We have so much diversity here and that’s our secret,” John Williams told NBC Boston’s Eli Rosenberg. “That’s our strength.” Peaceful gatherings seem to send the message that we should talk out issues and attempt to find common ground, even when intense feelings erupt. Similar laid-back gatherings have taken place in Somerville, Worcester, and countless other smaller towns, but they aren’t the events driving the narrative that appears in larger press outlets such as the Globe.  One wonders at the artificial divisions over Black Lives Matter this might be creating for the average newsreader. Do issues of violence obscure the larger discursive points brought forward by leaders of the BLM movement? Where have we seen this before?

Brockton reminds us all, both in and outside of the city, that it is up to the civilian population to end police brutality and uplift Black lives. Although some protests have ended in violent upset and led bystanders to question the protesters’ goals, the aims of the larger Black Lives Matter movement have been achieved throughout various places, as seen in Minneapolis’s decision to defund their police force. Similar action is on the table in Boston and other local communities, and I hope that we can continue having conversations and taking meaningful action long after these demonstrations, and the debate around violent vs. nonviolent protest, have ended.