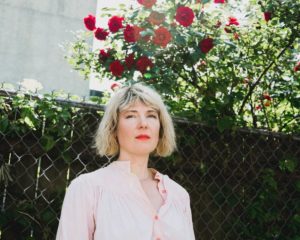 Philadelphia-based singer and songwriter Rosali released her much anticipated third LP, No Medium, last month, and Hassle had the opportunity to catch her for an interview. The album embodies a soft vulnerability wrapped in acoustic accompaniment. Best described as the backbone of the album’s songs, this pairing cuts to the core by wielding sheer honesty through the rawness of deeply personal experience.

Boston Hassle: When did you realize your passion for music and performing?

Rosali: I grew up in a large musical family so I sang myself right out the womb. My siblings and I would put on shows and concerts for any adults that happened to be around, like our parent’s hippie friends hanging out. I participated in singing and choir competitions and was in the state honors choir in middle school. Family friends owned this really cool old grange hall that had a stage on the 2nd floor, so on Friday nights we’d all get together, take turns playing songs, or all jam together. I really learned a lot from those jam sessions and the music ‘bug’ got me then. I don’t think there’s been a time in my life that I wasn’t in some kind of band or working on a music project. There’s really nothing more life-affirming for me than making music with other people and connecting with audiences.

BH: How would you describe your musical style?

Rosali: This one has always been difficult for me to answer. I usually just start listing off all genres, partly because I draw from everywhere and also because labeling and boxing myself in doesn’t do me any favors as an artist. Once I felt that “shoegaze country” was an apt description. But honestly for me it’s devotional music, devotion to love, to our core emotions, connection to who we all are as humans. I don’t approach a song with any expectation of what it should sound like, but more what it should feel like. That all being said, I do write some damn catchy songs, so maybe it’s just pop music?

BH: During the creative process, which comes first: writing lyrics or composing music?

Rosali: I work on both at the same time, but I think it’s the music and melody that comes first. I start with improvisation, and just try to let things flow out. When I land upon a line with the right cadence and attitude, I’ll build the song from there, referring back to notebooks and voice memos to flesh it all out. The sound and vibe of No Medium was a major collaborative effort with James Shroeder and the rest of the David Nance Group since we recorded it in a short amount of time and we were so familiar with one another.

BH: What artists have been your biggest influences?

BH: Lyrics in songs like “Bones” and “Whatever Love” give the listener a window into your world. How do you overcome the fear of vulnerability?

Rosali: I’m not sure I have overcome it, but I don’t let it stop me like I used to. With each of my three albums, I’ve had a panic attack leading up to the release. The self-doubt freakout is part of my process, the final stage for me to let go. And I can’t help but write this way. This is who I am. I like to cut straight to the heart of the matter, get in there, messy feelings and all because I know we all feel these things and what gets me through it is that on the other side, it will resonate with someone else. It is important for me to share openly and honestly, and with each song, I get a little stronger, grow a little more, heal a wound. I also really love the recording process and performing, so the joy and memory of making the music and the anticipation of playing them for people outweighs the fear and doubt.

BH: Much of No Medium was created during a retreat in South Carolina. What brought you there?

Rosali: That was in January of 2019, I was supposed to have been on a tour in the UK with J Mascis, but it was pushed back last minute to May. I’d already cleared my schedule for touring so I figured it was a good time to go write my next album. Friends of friends have an old family property that they’d started renting out to artists and writers for super cheap and so I went down alone for a self-imposed residency. I’d never spend that much time totally isolated and it was intense and definitely fostered a lot of deep self-reflection that comes through in the songs.

BH: How has music uncovered elements of yourself that may have been hidden deep beneath the surface?

Rosali: Music is how I best process the events in my life and the world. I’ve never been great with expressing myself any other way. I’ve found that I can better say what I want to when it’s in a song, or when I embody the character in the song. It can be a weird place to exist when hashing out personal shit in a public way but music is magic and all the elements of it; the sounds, delivery, inflections, all of that gives a more complete picture of what I’m feeling, which then helps me transcend it.

BH: As a guitarist, does your sound or style change when playing solo vs. playing with the Long Hots?

Rosali: Yeah, it’s different for sure, but also of the same spirit. In Long Hots, it’s a lot of free form playing with riffs I return to. As a trio, we lock into what we’re doing to create collectively. Playing in Long Hots has helped to free up my playing in a solo capacity. The biggest challenge I face playing solo is that I haven’t mastered playing leads and singing at the same time, my brain won’t allow it yet. So I often stick to rhythm and fingerpicking so I can sing more openly and relaxed, so in a way my singing is like my LH guitar playing. I am releasing a solo guitar tape later this year tho, which is a new thing for me!

BH: What other Philly-based artists should we check out?

Rosali: I have a duo guitar / drums improvisation record with my friend Jayson Gerycz called Monocot, coming out on Feeding Tube Records in July and that solo guitar cassette called Chokeweed on Unifactor. I’m super excited about both since it’s another side of my playing that I’m finally ready to share. This December, I’m happy to be tour support for Hiss Golden Messenger for a couple weeks. We’ll be playing in Cambridge so come out! And hopefully there will be more. I’d really love to tour with the Omaha crew.

Rosali: I just really want to thank everyone who has taken the time to listen and write about the album and everyone who helped to make it happen. Your support and love is everything to me.