Sunrise Movement first grabbed hold of the national spotlight when it staged a sit-in at Nancy Pelosi’s office after the 2018 midterm elections. This created a stir with pundits who critiqued the protest, asking why it was necessary to instigate such an action against the Democratic Speaker of the House, when, supposedly, she was on the same side. But Sunrise wasn’t asking for the same old trickle down, market based climate policy approach that establishment Democrats have been championing for years. They were asking for something more — and on an urgent timeline.

Sunrise is calling for a Green New Deal that mobilizes every aspect of American society to achieve 100% clean and renewable energy, guarantee living-wage jobs for anyone who needs one, and a just transition for both workers and frontline communities – all within the next ten years.

Sunrise Movement was launched as a non-profit organization in 2017 by activists with help from organizations like the Sierra Club, US Climate Plan, and Momentum. Sunrise has now become congruous with the progressive branch of the Democratic Party. It was a part of the proposal for a Green New Deal, co-sponsored by Representative Alexandria Ocasia-Cortez (D-NY) and Senator Ed Markey (D-MA). And now, after the election of Joe Biden, the group has been very vocal about picks for top climate positions in the new administration. Thus far, they have not looked great. Tom Vilsack, Biden’s pick for Secretary of Agriculture, will likely continue the pro-corporate, dairy lobbyist agenda he had during the Obama years. Representative Cedric Richmond (D-LA) was appointed to lead the White House Office of Public Engagement, where he is, “expected to serve as a liaison with the business community and climate change activists.” Richmond is a huge recipient of fossil fuel money (the fifth highest among Democrats), and his congressional district is home to some of the highest air pollution rates in the country – not exactly a glowing resume. Varshini Prakash, Sunrise’s executive director, cited this decision as a “betrayal.” However, the naming of Representative Deb Haaland (D-NM) to Interior Secretary is a huge step for the incoming administration and a decision pushed hard for by Sunrise. If confirmed, Halaand will be the first Native American woman to hold the position, and a proven champion for environmental justice. This win highlights the need for progressive voices to push Biden from his usual “extreme centrist” perspective.

Sunrise Movement juggles both this national agenda and boasts more than 400 local ‘hubs’ that promote community engagement on climate justice. With a national team very focused  on electoral solutions to climate issues, local hubs are able to key in on the more specific needs of their community, while also receiving training and media toolkits from the national team. This means Sunrise Boston tackles a lot – the hub’s Facebook page has information on everything from a clothing and food drive for those impacted by eviction, a seed give away to plant pollinator-friendly native flowers, Sunrise Boston’s digital magazine, and information on their ‘Defending Democracy and Climate’ rallies. 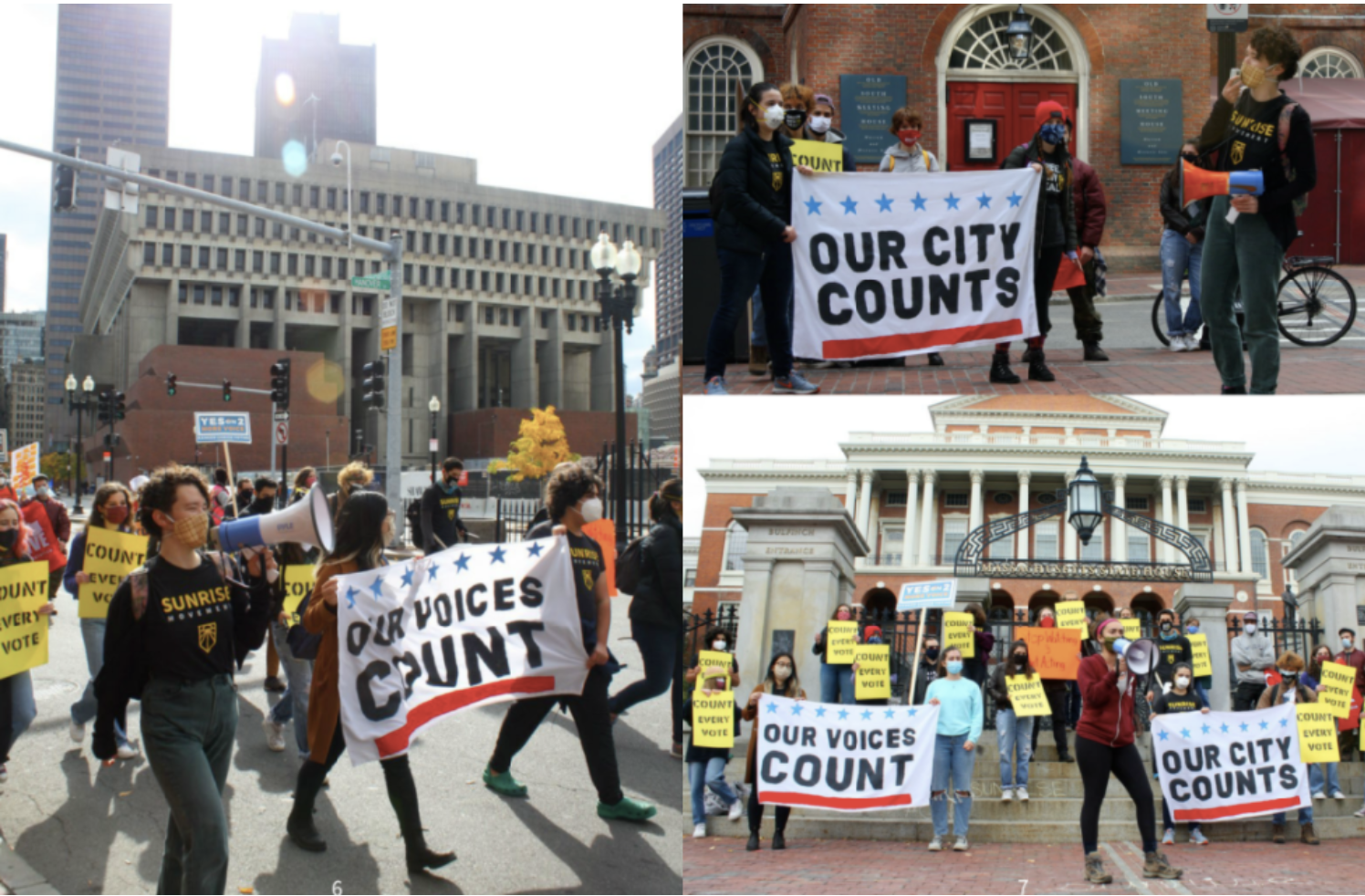 I was able to speak with Jeanette G., a Sunrise Boston member, about balancing Sunrise’s national agenda and more community-focused actions, as well as the hub’s priorities for 2021, and the importance of young people’s voices within the climate movement.

Boston Hassle: Why did you get involved with Sunrise and what is your role in the organization?

Sunrise Movement: I first heard about Sunrise Movement through the September Climate Strike. It had been organized by the Boston Climate Strike (recently renamed Massachusetts Youth for Climate Justice), which sparked interest for me in joining the climate justice movement. I was interested in politics before the strike, but wanted to get more involved. Within the Boston Sunrise Hub, I’m on the Actions, Media, and Spokespeople Teams. So I do a lot of work on planning our actions and messaging with the media.

BH: With local and state election results from Boston and Mass, has anything drawn your attention? For example, I saw that the ranked choice voting question, which Sunrise endorsed, got defeated which is a bummer!

SM: Erika Uyterhoeven’s win for State Representative from Somerville was a big accomplishment for our team. She’s a co-founder of Act on Mass, which is a statewide transparency campaign, and she is a great ally to Sunrise Boston. Brandy Oakley, who was elected as a state representative from Suffolk County, was another win. And of course Ed Markey. Much of our effort for his campaign was for the September 1st primary. We did a lot of phone banking and organizing for him. Sunrise was a big source of him winning. 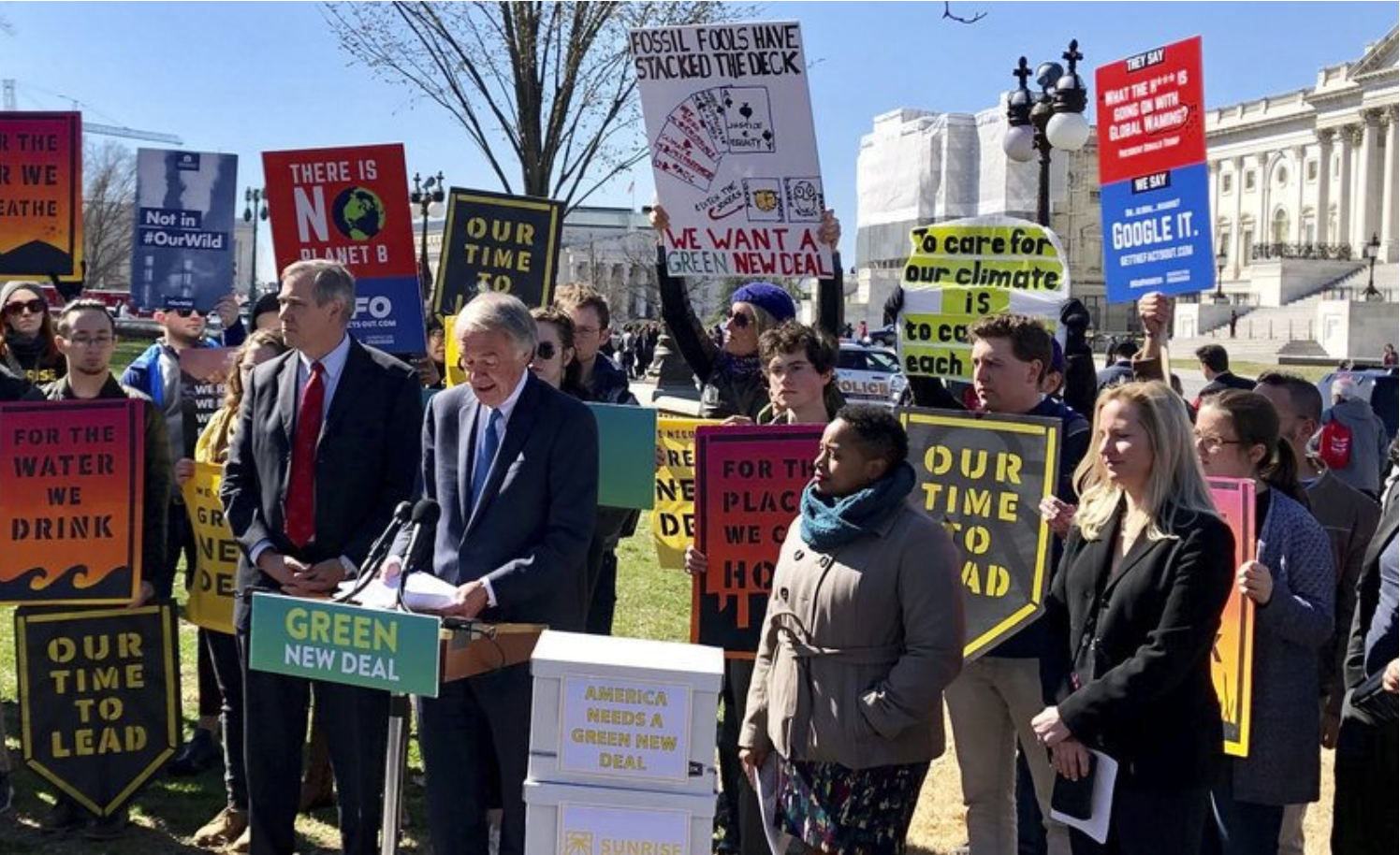 BH: There are many Sunrise Hubs in the Greater Boston Area – what level of collaboration is there amongst hubs?

SM: We are focusing on leaning more towards local work, however we do work with some of the Greater Boston hubs, like the hubs in Arlington and Lexington. Most of the work we do with other organizations comes out of our hub members who also do work with these organizations, that’s how the crossover occurs.

BH: Sunrise tackles a lot: housing rights, racial equity, a transition to a green economy – how do you choose what to prioritize?

SM: There are so many intersections between climate justice and racial justice and immigrant justice and LGBTQ rights, and much more. So if there is an event or campaign that showcases the intersections between these social justice issues, we would want to do an action around it. We also do trainings that correlate with those intersections. We really like to focus on the intersections of climate justice and the many other social and economic justice issues. But we could definitely improve on that in some ways. So we have partnered with other organizations that specialize more in some of these topics. So I think building stronger relationships with these organizations would benefit us. 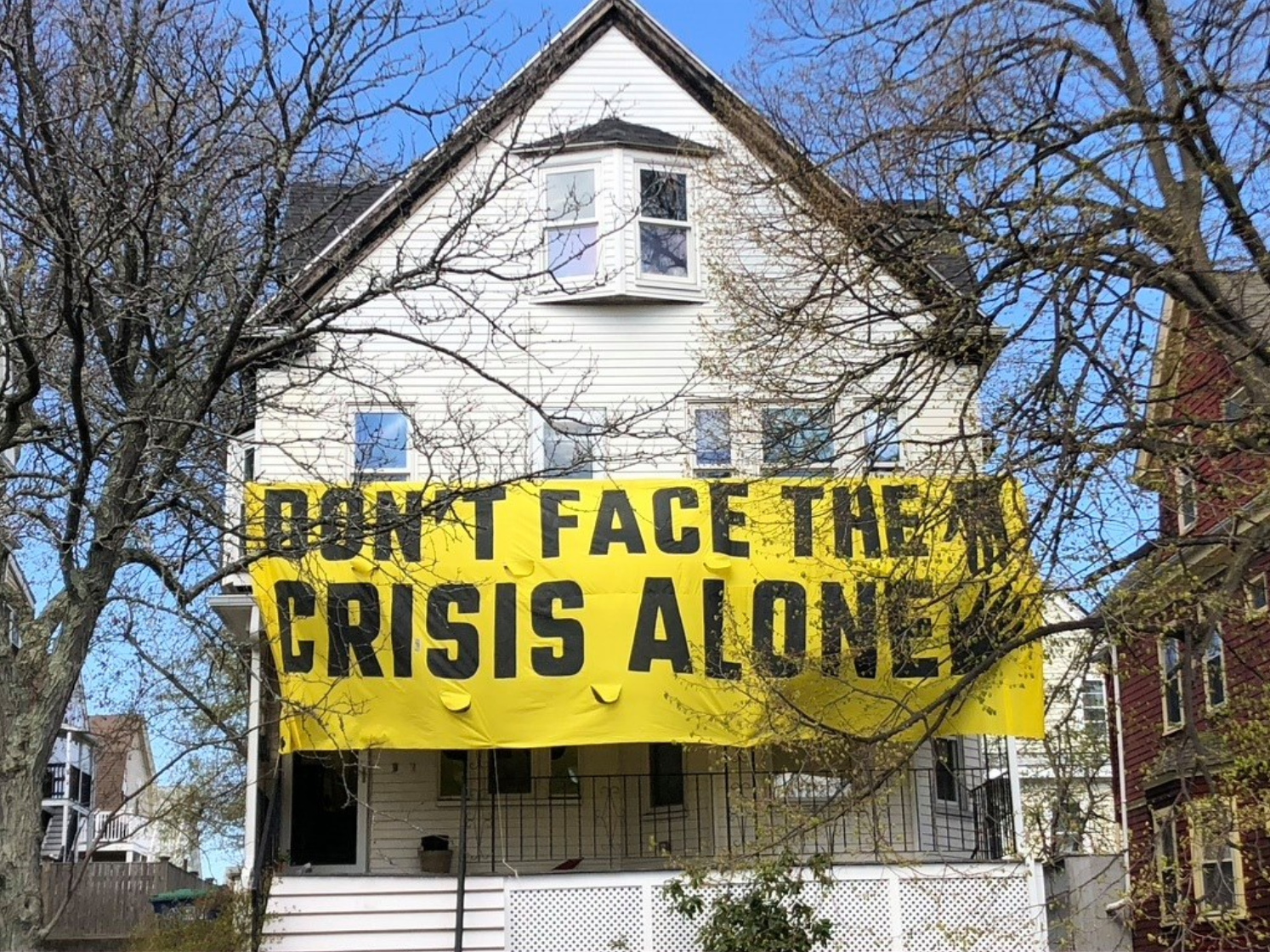 BH: Do you work with other organizations, either nonprofits or grassroots groups?

SM: During election week we had a week of actions that involved many other organizations. We had a night of working with Freedom Fighters Coalition, Boston Socialist Alternative and many others. Sunrise Boston was a big part of organizing a rally that week, where we worked with the Unitarian Universalists, Party for Socialism and Liberation, and Cosecha (which focuses on immigrant rights). Most of our work that week was on organizing these marches and rallies. We loved working with these other groups and we’re trying to integrate this collaboration into our norms moving forward.

BH: What should the role of social media play in activism? Do you think it’s a helpful tool or a hindrance to getting people more involved on the ground?

SM: It’s usually an active tool to get people out to actions. However we do see people signing up for something who then don’t actually go to it. That is pretty common. Or when people repost something on social media but don’t actually take the action themselves. But I think generally it does positively benefit our actions.

BH: What’s the dynamic between Sunrise Boston and Sunrise Movement National? How much coordination or dialogue is there between the two? Do you receive resources/support from them?

SM: Sunrise National is a very big force in what we do and most of the actions we take, unless it’s a more specific local action. Sometimes there can be specific actions National is pushing with certain messaging that the Boston Hub doesn’t necessarily agree with. But we do work a lot with Sunrise National, a lot of our actions and what we do in our hub comes from National.

BH: If there is a difference in opinion, what level of autonomy does the Boston hub have to do what it wants?
SM: Sometimes Sunrise Boston feels much more to the left than Sunrise National because National can take too much of an electoral approach to climate organizing in general. Even though we do a good amount of electoral work in Boston, we recognize it’s not the only way and often not the best way to actually achieve climate justice. We’ve been focusing more on mutual aid and community work recently. 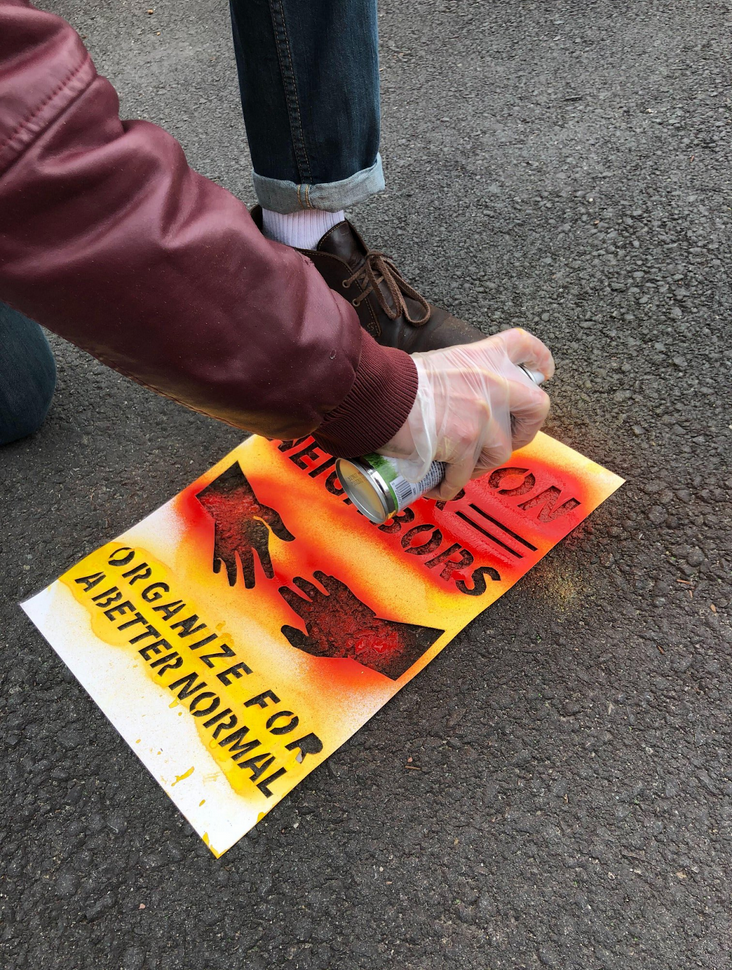 BH: When talking with XR Boston, we mentioned how even in blue states, where the Democratic majority is quite large, there is still major inaction on wide scale climate policy. Why do you think that is, and what can we do about it?

SM: I really think it roots from the non-transparency in the State House. Recently we have endorsed the Transparency Is Power Campaign with Act On Mass. It is asking to ensure all votes on legislative committees are made public, that proposed bills are made public online 72 hours before a vote, and the threshold for a bill to be publicly recorded in the House of Representatives is reduced from 16 to 8 representatives. We are urging all state representatives to support this campaign throughout this legislative session.

BH: In your experience, what works and what doesn’t when developing actions and local movements for environmental justice? What would you say to others trying to organize in their own communities?

SM: I would definitely say a great priority to have when you’re organizing in your community is to try to build strong relationships with other local and community organizations and coalitions. It is hard, and more work, but it really will help you in the long run. Within the Actions team I’m on, there is an emphasis placed on building strong bonds. So I think if you make your team a good place to be, it is much easier to organize actions and to push for priorities that everyone agrees with. I co-led an action and we learned a lot just from doing it – like how to promote your event and how to get people to actually listen to you.

SM: We’re going to be pushing the Thrive Agenda on Joe Biden, which is a more aggressive climate agenda. We’re demanding a just economic recovery that creates millions of green jobs, invests in BIPOC and frontline communities, and commits us to 100% renewable energy by 2035. We are going to start the year by pushing those demands and also the Transparency Is Power campaign on a statewide level. Some people in our hub are more focused on National’s agenda and others are more focused on internal hub workings and local/state pushes. We are thinking about an action around Joe Biden’s inauguration, and that would definitely be coming from a Sunrise National approach. But looking further down the road, we want to be focusing more on local actions.

If you’d like to get involved with Sunrise Movement, here’s a link to all the chapters currently operating throughout the country. And here’s the link to Sunrise Boston’s Instagram and Facebook page in which more local events are posted.

Interested in learning more about the State House and how to push for a more transparent and functional government? Join Sunrise Boston on Saturday January 9th at 2pm to get involved: sign up here.

Liked it? Take a second to support Alison LaFrance on Patreon!