Out of the Blue Too hosted Boston’s eighth annual Underground Summit this Thursday. The summit featured nine bands playing on three stages in a round robin style. One song from one band and onto the next so it went. Round and round, trading sounds. The summit’s nine bands included DENT, Banana, Peter J. Woods, Father Lemon, Rosie + the Rosies, EDITH, Jim Leonard Band, Girls and God, and TRIM. The art-gallery-turned-concert-venue embraces in size and spirit, with tons of odd trinkets and coves of art to wander in.

DENT kicked off the summit launching at the listener a full explosion of sound. The lead vocalist created an electric ring around her. She was an absolute powerhouse, and a hell of a performer. The band, hinged to each other, fully supported the coursing torrent of sound that she headlined. A psychedelic experimental metal, DENT’s sound was haunting, heavy, and immersive. As the night’s first song finished, the focus shifted to the next stage and the next band: Banana. (Find them here: http://bananama.bandcamp.com/releases). Self-tagged “alternative girl rock/weird rock,” Banana hits that precise, unusual nail of a genre right on the head. The band whined and roared in turn, with rhythms that makes it easy to groove along. The songs were packed with the personal, always universally weird, feelings of growing older. 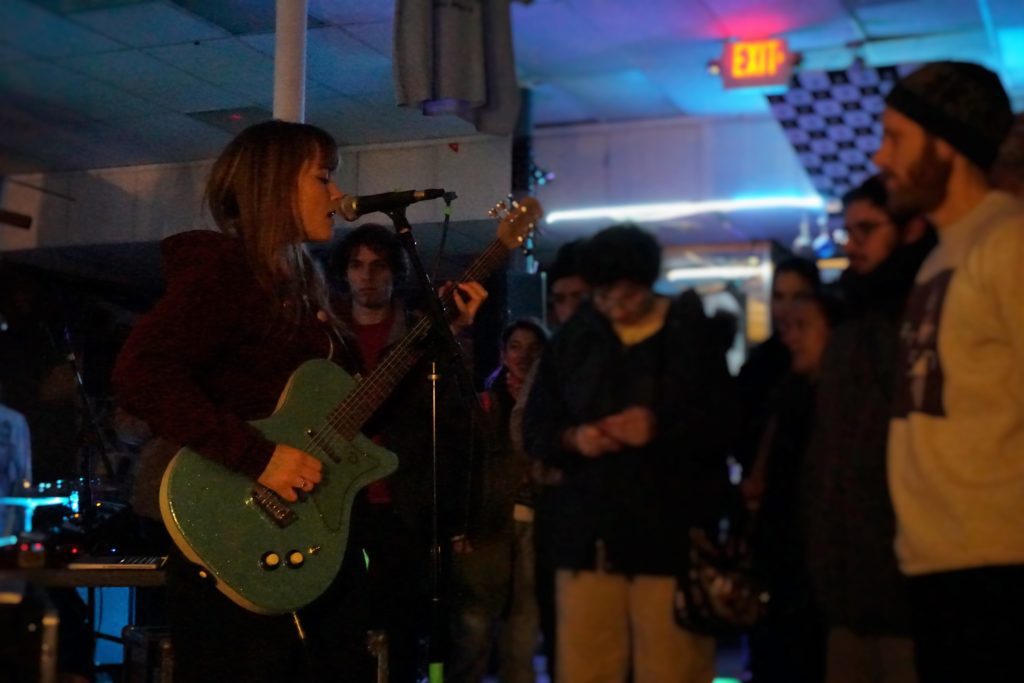 Peter J. Woods taught me what noise music is supposed to be. His Bandcamp page is one of the most impressive I’ve seen, completely stocked full with music and merchandise. In each song, the seriousness he feels for the craft can be felt for the full duration (sometimes up to 16 minutes). And Woods’ set was unwaveringly intentional. His first song filled me with broad sound and once it settled, and I came to enjoy the pulsing feeling deep in my chest, he swiftly cut us off. I felt as if I had lost something as important as a limb. Without the noise, I felt empty. Each of Woods’ songs was a masterful control of sound and, consequently, emotion. Father Lemon was the next to play, completing our first rotation of the three. This artist provided an interesting juxtaposition to Peter J. Woods. Whereas Woods filled the room (and the people in it) with sound, Father Lemon nudged the listener toward something other with finely measured compositions. His music seemed to grow out of itself. Noise music mixed with experimental electronic Father Lemon had the crowd pulsing and throbbing, enchanted.

You can check him out riiiiight here: https://fatherlemon.bandcamp.com/. I recommend “Sewrjogg” to capture the sort of atmosphere Father Lemon was constructing. Rosie and the Rosies stepped up next. Their bandcamp page describes their music as “noise pop rock whatever,” and the Rosies had a lot of different sounds. With songs that teetered from pop-y to almost metal-like, the Rosies had people moving to a range of sounds. Whether the crowd was tapping their feet or head banging, they were pretty taken with the Rosies. 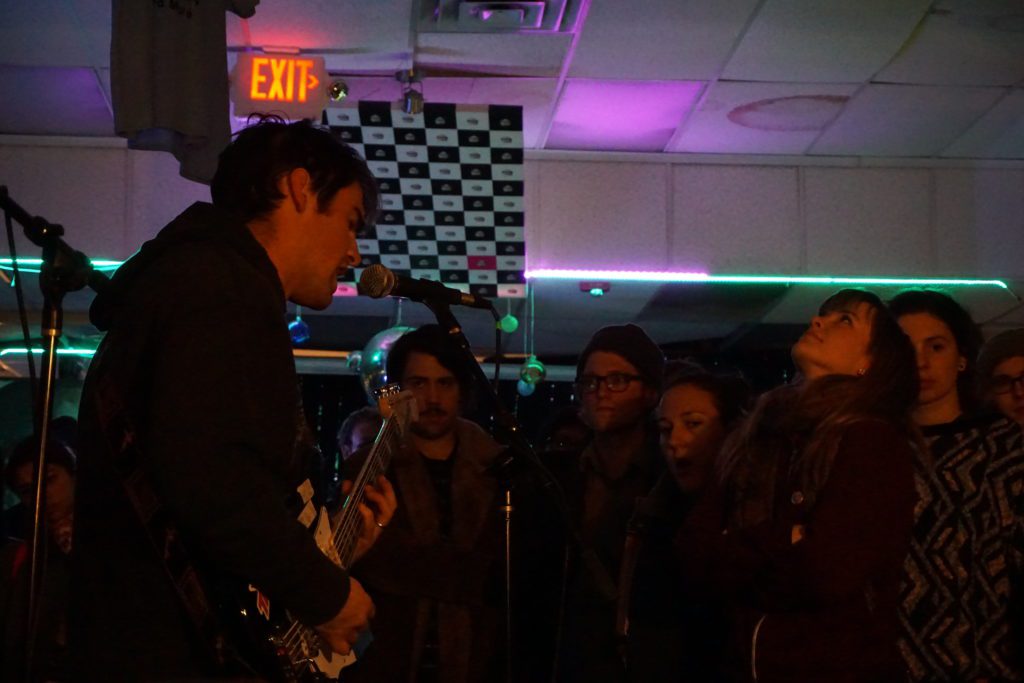 EDITH began playing across the room and the crowd turned eagerly to listen. A new band composed of members of older groups like Brain Killer, Hands and Knees, Genesis Climber, and more, people weren’t quite sure what to expect. With only two people, EDITH produced a huge amount of sound. Sort of creepy rock and roll poured forth, and the people were happy. The Jim Leonard Band stepped up and gave my heart a whirl. I was so pulled in by the gorgeous tuning of the lead guitar and the marked talent of Jim Leonard himself. The lead guitarist/vocalist, Jim, absolutely shredded on the guitar. He was so incredibly good that I started to wonder if I was watching the next great guitarist of our time as he makes his ascent. The entire band was tight, and well-orchestrated. They produced interesting yet classic rock songs that had me nodding along the entire time. Absolutely check them out.

“Kathy Cross” is a really great song with some guitar progressions to make your heart sing. 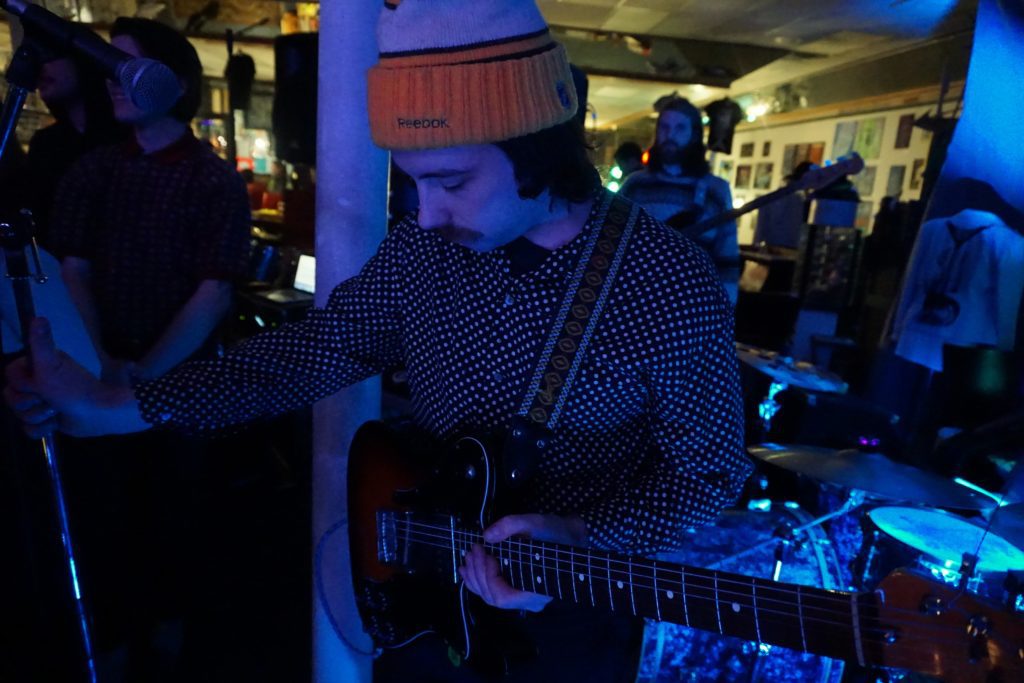 If I thought my heart was going to get a rest, I thought wrong. Girls and God stepped to the staged and owned that shit like it was December 31, 1999. One artist standing alone on the stage with a guitar, and chock full of talent as well. Girls and God offered experimental music based entirely around the guitar. He used a number of different techniques, and managed to keep the crowd unsure of where he was going to go next. But within the variability lay an almost classical production. Check out “sits down at the other side of the table” on his bandcamp (https://girlsandgod.bandcamp.com/album/girls-and-god) to get an idea of what I mean. His songs were emotional and scripted and relied entirely on his singular talent—and he pulled them off flawlessly. TRIM was the last band to present themselves for the night, before the nine groups cycled through again. A drummer, lead guitarist, and keyboardist came together to create a neat rock and roll meets noise meets metal concoction that was interesting and fun.

You can find them on soundcloud :   https://soundcloud.com/trimendous To see more photos of the event, navigate that clicker tool to the right and Click Here !!! 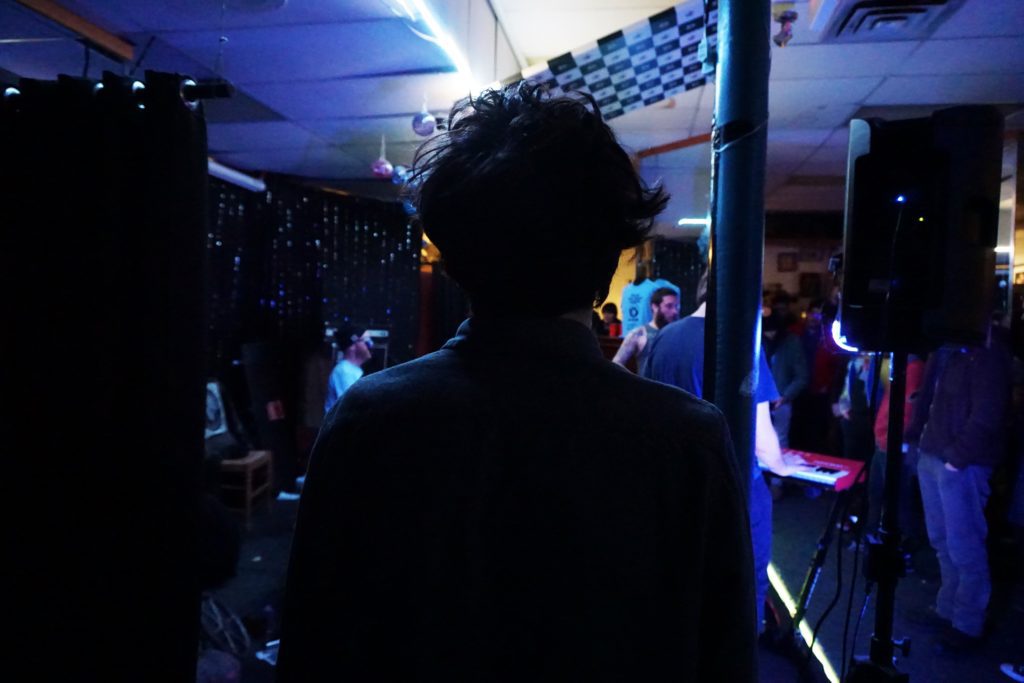