This spring, a number of art exhibits centering visions of the future were advertised in Boston. In a twist of fate, these much-needed visionary spaces have been adversely affected by the closure of art spaces due to coronavirus prevention measures.

Three art exhibits in particular used the word future or futurism in their branding: the Indigenous Futurism program series hosted at the North American Indian Center of Boston (NAICOB), the FeministFuturist exhibit at the Mills Gallery of the Boston Center for the Arts, and the Mayor’s Poetry Program at Boston City Hall. For the latter, the theme for 2020 was “Boston Futurism” specifically.

However, some of this programming has been interrupted by coronavirus prevention measures. An event at the Mills Gallery planned for March 11th, a fashion show associated with the FeministFuturist exhibit, was cancelled the day of, assumedly due to infection risk concerns. The Indigenous Futurism series event “Native Apocalypse” successfully took place on March 9th, with the second part of that event scheduled for March 24th up in the air. For events scheduled in March and April, a post on the NAICOB Facebook page dated March 13th indicates: “Conferences, seminars and other gatherings involving more than 25 people, scheduled and hosted by NAICOB involving partner organizations, are to be held virtually or postponed to a later date.”

Given the circumstances, these programs might have provided Bostonians with something in short supply: spaces to find catharsis as well as dream forward. 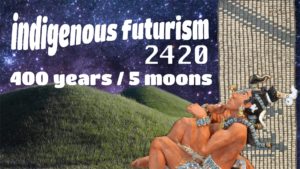 “This year, while many people are observing the 400th anniversary of the landing of the Mayflower; the objective of Indigenous Futurism 2420 asks our community members to project themselves 400 years into the future,” says Jean-Luc Pierite. Pierite is a member of the Tunica-Biloxi nation of Louisiana, who found himself in Boston after being displaced from New Orleans in the aftermath of Hurricane Katrina. Pierite is the Chairman of the Board of the North American Indian Center of Boston (NAICOB) located in Mission Hill, where a series of 11 events will culminate in an Indigenous Futurism exhibit in May. “Building on the themes in walking the clouds, edited by Grace Dillon, we are cultivating a cohort of artisans and futurists who ask: what stories will our descendants tell?”

The Mayor’s Poetry Program Boston Futurism installation will purportedly continue, with the writing submitted being judged by City of Boston Poet Laureate Porsha Olayiwola. A reading of the winning entries planned for April 19 is similarly in limbo.

Mayor’s Office representative Kristina Carroll said in early March of the Mayor’s Poetry Program exhibit: “A lot of what we do is reimagining and looking at the way things were done in the past, and thinking about what we do in the future. We’re really looking at the fact that the city of Boston is so diverse. It’s a priority of ours to make sure that artists of color are reflected in the Greater Boston arts ecosystem.”

The Mills Gallery at the BCA in addition to all Boston Center for the Arts spaces have been closed as of March 13. It is unknown at this time whether or not FeministFuturist, which was planned to be on display until April 5, will have a closing reception. In a post on the FeministFuturist Instagram, the curators said: “Sorry that you won’t be able to see the show in person but stay tuned to the BCA website for an on-line select representation of the show.”

Elsewhere in Greater Boston, the Institute of Contemporary Art Boston closed on March 12 “until further notice”; Dorchester Art Project announced Monday that it would be closed until “at least” April 1st; Cambridge’s Gallery 263 shut its doors temporarily and rescheduled its upcoming exhibit opening to early May. The Mayor’s Office announced on March 12 that it would open an Artist Relief Fund for artists negatively affected by coronavirus-related cancellations and work stoppages.