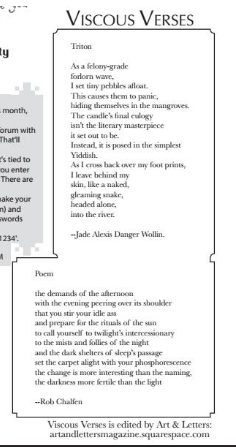 As a felony-grade
forlorn wave,
I set tiny pebbles afloat.
This causes them to panic,
hiding themselves in the mangroves.
The candle’s final eulogy
isn’t the literary masterpiece
it set out to be.
Instead, it is posed in the simplest
Yiddish.
As I cross back over my foot prints,
I leave behind my
skin, like a naked,
gleaming snake,
headed alone,
into the river.

Jade Alexis Danger Wollin has several poems in the August-September issue of Art and Letters. These are among her first published poems.

the demands of the afternoon
with the evening peering over its shoulder
that you stir your idle ass
and prepare for the rituals of the sun
to call yourself to twilight’s intercessionary
to the mists and follies of the night
and the dark shelters of sleep’s passage
set the carpet alight with your phosphorescence
the change is more interesting than the naming,
the darkness more fertile than the light

Rob Chalfen lives in Cambridge, Mass. He has poems in the August-September issue of Art and Letters.

Viscous Verses is edited by Art and Letters (artandlettersmagazine.squarespace.com)