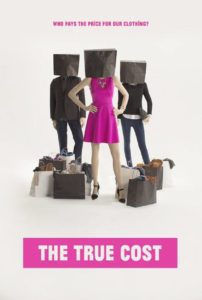 The next time you hit Forever21, H&M, or similar “fast fashion” retailers, the filmmakers behind the documentary The True Cost ask that you first consider the impact your consumer habits have on both the environment and the socioeconomic conditions of the countries where such garments are produced. The term “fast fashion” refers to the constant, cyclical push for new clothes; enabling the arrival of new fashion items in stores as soon as possible after their arrival on runways. Still a fairly new pattern, it has nevertheless has massive ramifications for the entire world.

The film seeks to raise awareness of the global impact of our choices as consumers by focusing on the garment and fabric industry in particular. While the cost of clothing has been decreasing steadily over the last few decades, levels of consumerism and shopping pressure have been steadily increasing as more people can afford more new clothes. The film asks viewers to meditate on how its possible for these clothes to be made so cheaply, and who ultimately suffers from the impossibly low costs. Because much of the labor is outsourced to third world countries where factories typically pay much lower wages and cut costs further by ignoring safety precautions in working conditions, it’s a serious human rights issue as well as an ecological one.

In addition to horrible working conditions and perpetual poverty of garment workers in these third world countries, the film also highlights health issues involved in sustaining the raw materials for creating fabrics, cotton in particular. As more and more of these plants become GMOs, or genetically modified organisms, and pesticides are more widely used, so too has there been a direct increase in the number of cancer cases and other diseases.

The True Cost is a collaborative effort of director Andrew Morgan, known for creating films that “tell stories for a better tomorrow,” and producer Michael Ross, who brings an advertising and journalistic background to the project. Other members of the team include executive producers Lucy Siegle, Livia Firth, Vincent Vittorio, and Christopher L. Harvey, each of whom brings some experience in either documentary filmmaking or a background of striving to improve the human condition through education and awareness. 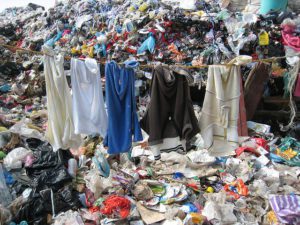 While the film’s main goal seems to be simply to bring awareness of who actually pays the high cost of bringing cheap clothing to the U.S., it also questions why an industry that is one of the largest in the world can’t afford to create better living conditions for the workers at the bottom of the process, especially when so much profit is made at the top. Further issues raised include the fact that the garment industry is second only to the oil industries in contributing to pollution and climate change of the planet. In fact, because of the sheer size of the textile industry, Columbia Gas reports it is one of the biggest emitters of greenhouse gases on Earth, accounting for as much as ten percent of the global carbon footprint.

The creators behind this film seem to understand that there is no simple solution to solving this problem. As long as corporate greed and capitalism continue to call the shots in the garment industry, workers in third world countries are forced into competition to produce the most product at the cheapest costs. However, the filmmakers are clear on the fact that an effective solution needs to be system-wide and likely involve a massive change in the way we view and value our material possessions. While some factory owners and designers are are switching to better practices, it’s documentaries such as this, when seen by enough of the targeted audience, that have the power to influence such a change.