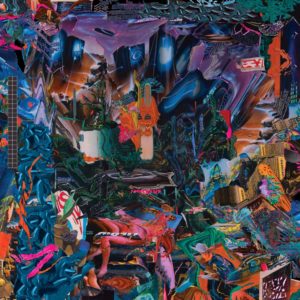 Everything about black midi raises one question: “what the hell are they on about?” With esoteric lyrics delivered in Geordie Greep’s unmistakably nasal chirp, to Morgan Simpson’s relentlessly shifting drum patterns, black midi is a band that refuses to be pinned down. While the lack of discernible order or meaning in black midi’s music feel frustrating—or even unwelcoming—their ever-evolving aesthetics and thrilling chemistry make their music just as pleasing as it is confusing.

This is as true as ever on their sophomore album Cavalcade, which takes on a glossier sound and a more theatrical form than their relentlessly rough debut, Schlagenheim. On the opening number “John L,” Greep paints a picture, “There was a scene on main street when John fifty came to town.” The shrieking violins, rumbling guitars and (quite literally) smashed piano clearly paint an unholy, even perverted scene, but the song has a distinctly theatrical feeling to it. Rather than connecting directly to what black midi is displaying, it feels like a spectacle that can only be gawked at from outside.

Even while keeping their audience at a distance black midi finds unexpected ways to resonate. While the glossy finish of Cavalcade can prevent it from reaching the same heights of chaos as its noisier predecessor, the cleaner production leads the album to unexpectedly beautiful places on songs like “Marlene Dietrich” and “Diamond Stuff.” Moments like these come dangerously close to being outright emotional, but Greep’s lyrics, along with sweeping strings on “Marlene” and choir vocals on “Diamond Stuff” keep the feel of the songs just lofty enough to stay in the realm of spectacle.

The orchestral elements that appear on these songs, and numerous others on the album, bring new variety to black midi’s sound and play a huge role in the theatrical feel of Cavalcade. Up until now, a major appeal of black midi has been their chemistry as a four-person unit. Songs like “bmbmbm” from Schlagenheim proved black midi was greater than the sum if its parts. Their no-frills dynamic felt like it had limitless potential, so expanding on it can feel like a significant loss. But ultimately, while the grandeur of Cavalcade might not have the simplicity that made black midi so impressive, the album demonstrates its own kind of focus and aesthetic cohesion.

“Ascending Forth,” the near ten-minute closer, drives home the loose theatrical and musical themes sprinkled throughout Cavalcade. Greep’s lyrics feel, for the first time, conscious of the audience they’re reaching as he repeats “everyone loves ascending fourths” over crystal clear, plucked guitar. This striking moment of self-awareness feels like a break in character where just for a moment our lead stops to consider the onslaught of chaos that he’s unleashed, and decides to please the crowd with a pleasing tune as a respite. As the song progresses, the chaos returns, but takes on a different air. “Ascending Forth” feels like an intentionally contrived grand-finale designed to please a confused crowd. At the song’s close you can almost picture the conductor waving his baton as the orchestra ends its harmonic final note. But the overtly conventional finale brings a new kind of dissonance as it clashes harshly with everything we’ve come to expect so far.

Cavalcade isn’t just a talented band expanding their musical ambitions, but also clever theatrical exploration of the balance between pleasing a crowd and subverting expectations.