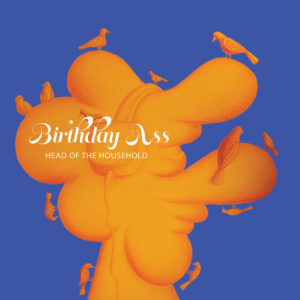 Berklee-to-Brooklyn art-rockers have released the second single from their upcoming album, Head of the Household.

“Sunlit Toes” feels coherent in an immediately exciting way. It—obviously, luckily—retains the paranoid energy of their 2018 full-length, Baby Syndrome, but casts it within a framework of cleaner production and (so it feels) a warm, almost embrace-like layering. The track—composed by lead singer Priya Carlberg—strolls out of the gate with a moody, spacey riff by guitarist Andres Abenante, soon after joined by Jonathan Starks’ explosive drumwork, complementing the track’s wanderingness and flanked by the often dissonant and meandering horns of Alex Quinn and Raef Sengupta, along with Dan Raney’s cushioning presence on bass. Carlberg talk–sings over it all, a constant fluttering of thought and voice all running together into one grand stream-of-consciousness anxious cataclysm.

It’s a freneticism that feels at home, in place, perhaps more fitting now, during a time in which the contradictions of late capitalism have been laid bare in a psychotic frenzy, than it did in the spring of 2018. In a certain way, it feels like the only music that could be made right now. It reminds of that quip Adorno had made decades ago, that “Absolute reification, which presupposed intellectual progress as one of its elements, is now preparing to absorb the mind entirely. Critical intelligence cannot be equal to this challenge as long as it confines itself to self-satisfied contemplation” (Prisms, 1955). Adorno had feared, it seems, the development of a critical–cultural relationship in which the former accepts and enables the latter without really, genuinely critiquing its cultural context, historical importance, and the general process of reification and late capitalism that subsume all of it.

What is needed—and what, I believe, Birthday ass supplies and then some here—is a form of cultural utterance that breaks out of the norms of the culture industry and complacency that attempt to absorb it. Landmark labor bills falter in Congress, student loans are piling up, and the same artists who swear off the evils of late capitalism are later praised for indulging in and endorsing them. It’s endless and unselfconscious; truly norm-eschewing sounds (noises, in the most literal sense of the term) are needed.

Scream the track does. But it still hopes for a brighter future, finds ways to escape in the moment. An explosive taste of things to come, a promising look into the upcoming full-length.