Currently on view at the ICA, Nari Ward: Sun Splashed presents large scale artworks built out of discarded materials that the artist has gathered over the years, such as thrown away detritus that collects on sidewalks. Engaging, yet playfully complex, these nuanced artworks blend the personal, everyday experience with pointed references to issues of power, politics, and history in society.

As a native Jamaican who immigrated to Harlem in the 70’s, Ward is able to employ a playfully innocent (and occasionally naive) perspective when he creates artworks that suggest critical observations of his new home. For example, Ward’s exhibition begins with Happy Smilers: Duty Free Shopping (1996), which is a colorful, welcoming yet noisy room filled with the sounds of parrots loudly squawking short, simple cartoonish phrases over and over again, as though performing the same trick to tourists in exchange for promised treats. 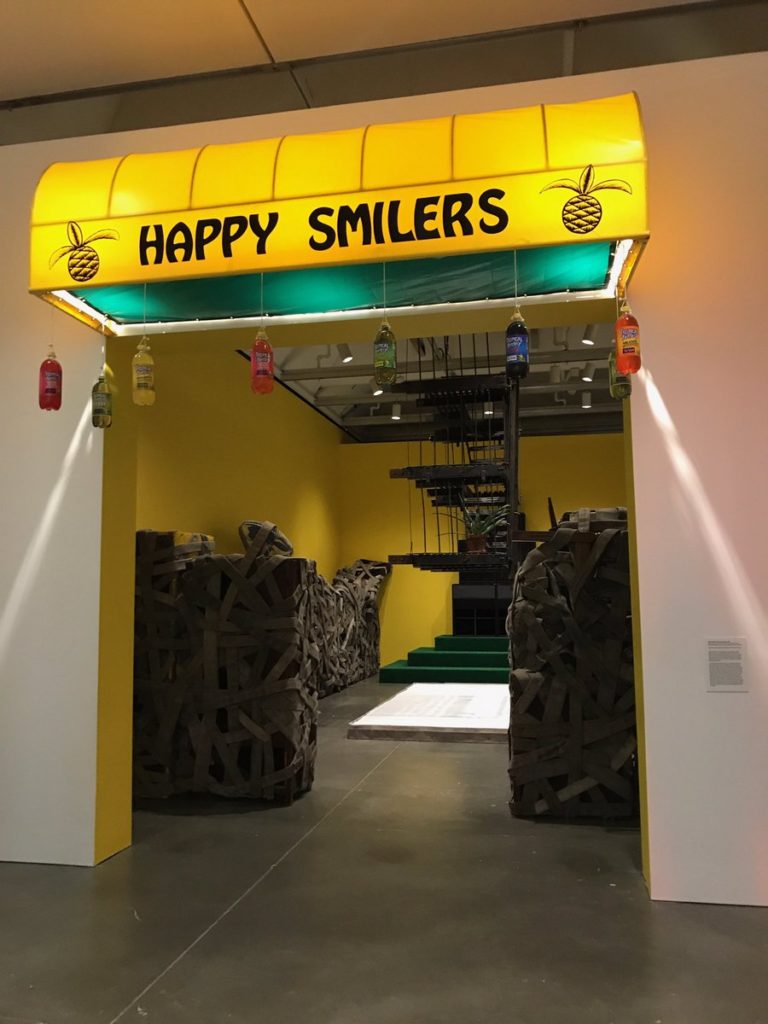 Large colorful soda bottles attached to a bright yellow awning hang above the entrance of the Happy Smilers room, and the entrance to the room itself is constricted by a mass of low ‘walls’ made of discarded car tires, window fans, and other household objects wrapped in lengths of dirty fire hose. Inside the room, a full scale fire escape hangs down from the ceiling and becomes the literal center of attention.

The fire escape’s imposing presence, coupled with the fire hose walls ‘pushing’ the spectator into the center of the room, quickly turns the space into a stifling and claustrophobic one, a stark contrast to the previously welcoming and colorful space promised by the bright, carefree appearance of the entrance to Happy Smilers.

Impossible to ignore, the fire escape’s presence invites the spectator to make sense of its symbolism and the possible role it plays in the environment built in Happy Smilers.

Another interpretation of the scene in Happy Smilers hints at a darker sense of escape, and the fire escape’s presence might instead point to the need to have a way to escape (i.e. to run from) an unstated source of possible danger and imprisonment. The black metal bars of the fire escape resonate with the imagery of prison bars, and the floor directly underneath the fire escape is covered with a mysterious textured white surface, suggesting an unknown future, or an endpoint that will ultimately have to be defined by outside powers. 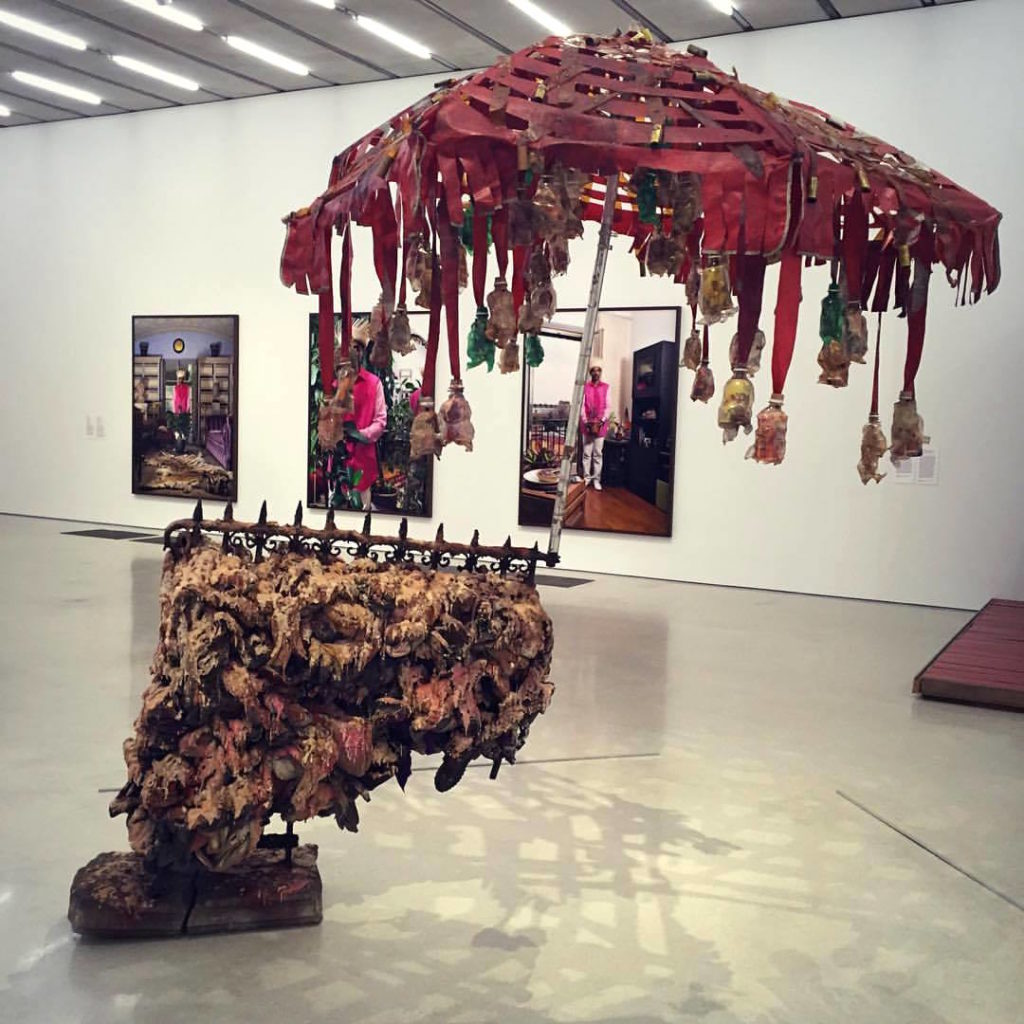 Another full scale work displayed in the exhibition is Sky Juice (1993), a piece made up of a large red Coca-Cola umbrella ripped to shreds and attached to a few feet of wrought iron fence missing a sizable chunk of its lower bars. Underneath the fence lies an insufficient amount of cement to support the weight of Sky Juice, causing the entire piece to lean to one side. The umbrella attached to the edge of the fence in Sky Juice tips towards the floor, evoking a sense of precarious balance.

The black spikes of the top portion of the fence look as though they have ‘pierced’ through a huge mass of dirty discarded worker’s gloves that are jam-packed into the bars of the fence. Ward has drenched this mass of worker’s gloves in ‘Tropical Fantasy’ soda several times over the years, and as a result the mass of gloves is coated in revolting layers of dried up sugar-crystalline globs left behind by the evaporated soda.

The transformation of the once brightly-colored ‘Tropical Fantasy’ soda into its now faded and dried up form coating the huge mass of dirty worker’s gloves can be interpreted as an allusion to a similarly dark transformation that occurred in Jamaican history as a result of the brutality of the sugar trade during the colonial period.

Ward’s use of the empty and discarded worker’s glove can work to highlight similar themes that play out on the personal level. The image of the empty glove can simultaneously echo the presence of the worker in history (the glove representing the corporeal reality of the person who once wore it), and the symbolic absence of the worker as someone departed from the past or as someone who has, in a sense, been deserted (stricken from the past), and left out of the history books.

There are many other interesting and engaging artworks in Sun Splashed, including film pieces and works on paper that deserve close attention. The majority of them are large scale pieces and some pieces even feel larger-than-life, and are fun to walk around and examine. Because of the amount of large scale pieces, the gallery space can feel cramped at times, especially during the Free Admission nights every Thursday at the ICA. However, there is a lot to appreciate and enjoy in the careful artworks included in Nari Ward: Sun Splashed, so be sure to visit this smart exhibition before it closes in early September.

Nari Ward: Sun Splashed will be on view at the ICA until Wednesday September 4, 2017.