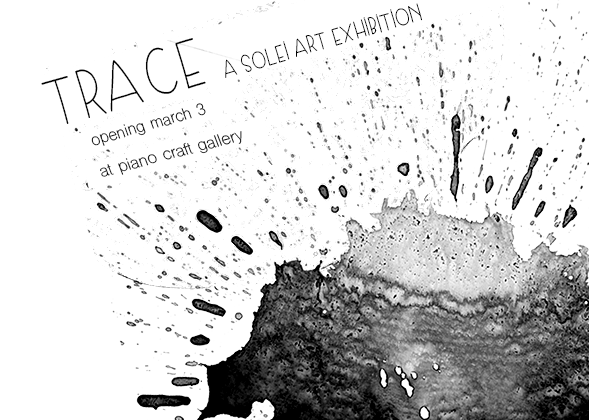 On March 3rd, from 6 to 10 p.m., the South End’s historic Piano Craft Gallery is hosting the opening reception of Trace—a Solei Art Expo. The event will feature an artist talk at 7 p.m. as well as a live musical performance by Solei at 8 p.m.

What began as set backgrounds for Solei’s band Atlas Lab’s performances has evolved into a body of work exploring themes of time, boundary, repetition, and control. To begin her process, Solei dilutes acrylic paint until it is close to water texture. Then she drops cupfuls from a height of up to six feet—in the artist’s words, “harnessing gravity and fluidity to create large natural splatters.”

Once the paint dries, Solei balances the chaotic freedom of her splatters by tracing focused, specific details around them. Outlining the edges of her lawless splotches becomes a devotional practice. “To me the process of creating Trace paintings is like replicating history,” Solei says—“Drop, splatter, trace, repeat.” For more information on Solei’s Trace paintings, you can read her artist statement at www.soleiarts.com/trace.

Solei is an interdisciplinary artist living in Somerville with roots in Maine. A graduate of Tufts University, she has previously exhibited work in Boston, Cambridge, Somerville, New York, and Maine. When not creating art, she works as Designer-in-Chief of Boston Compass and Art Director at the nonprofit Brain Arts.

The Piano Craft Gallery is located at 793 Tremont Street, a five minute walk from the Mass. Ave. T stop. If you miss opening night, the exhibition can still be seen on Fridays from 6-8 p.m. and Saturdays & Sundays from noon-5pm between March 3rd and 25th. A closing reception will be held March 24th from 6-9 p.m.

This Week in Experimental Vol 79

Hello Experimenters! I hope this message finds you warm, healthy, and safe. This week, my students are getting into the real content…