Three old friends sit around the table, eating breakfast. They’re bullshitting, twisting their tongues and turning their words. They “practically speak in rhyme” Ian, one of the friends, later tells me. While rhyming and chatting, they fall upon the phrase “Beach Toys.”

Fast forward and you’ve got a bunch of musician friends who finally have fallen together to play music under the moniker “Beach Toys.”

What “started as a recording project” has become a two year band. But Ian Doerr, vocalist and organist, assures me that it still has all the fun of a recording project. When asked if the band would want to rise to fame and fortune, Ian said that he was pretty happy with the band’s current status. “I love playing music with my friends; it’s the best.”

And they are friends. Ian, also a recording artist, had been recording music for Ryan Major (one of the original members of Beach Toys) and Justin Lally for years, finally coming together to make music as Beach Toys. The original members have changed, but the band has continued to play. Consisting of Ian, Justin, and Holden Lewis, the three piece band is a talented and flexible group. The band sports a drummer (Justin), a bassist (Holden), and an organist/vocalist (Ian). Their sound varies from dreamy psychedelic pop to deconstructed-pop-meets-electronic. While original member Ryan Major still comes back to play guitar for the group sometimes, the band is “very happy as a three piece” and Beach Toys comes together masterfully. Ian speaks on this, and on his choice to play the organ.

“I love the organ. It’s got this great sonic range, and I’m really happy with that under a bass and drums. [The organ] is a very powerful instrument that conjures up different emotions.”

The combination is indeed powerful and lends itself to different sounds. The organ is so unique that the whole sound is very distinct. When asked about the band’s influences in creating music, Ian says that the band doesn’t really think of anyone else’s sound while in the studio. They prefer to stick to their own style. And that style ranges. But one thing they all agree on is Donovan. They love Donovan.

Even as the style changes, the band’s methods stay the same. Beach Toys prefers to create extremely intentional songs. “We spend a lot of time on the structure and crafting of the songs,” Ian says. This is directly contrasted with one of Ian’s current personal projects. The musician is currently experimenting with the genre of “musique concrete,” which is the technique of creating music compositions from raw sounds. Ian created Swedish Boogie Nights, a song on the band’s soundcloud, while staying in a cabin with a few friends over one weekend. This was an experimentation for his upcoming art installation at Harvard that will explore the interactions of people with tape machines in order to create music. The musician calls Swedish Boogie Nights “unorchestrated moments in time played over each other.”

So what’s next for the band as a whole?

Tonight, Beach Toys will be playing a free show at Zuzu, which Ian called the band’s favorite venue to play. The group has played at Zuzu more than they have played anywhere else, partially because they used to sneak on the bill as openers whenever they knew one of the bands playing.

So, head out to Zuzu, hear the Beach Toys close the night and, as always, keep ears on their soundcloud for new music to surface.

Ian says the band has a few songs they’ve been holding on to, but we can look to hear more music from the group soon.

To hear new music really soon, head to Beach Toys’ bandcamp to check out their just released “Wasted On You.” 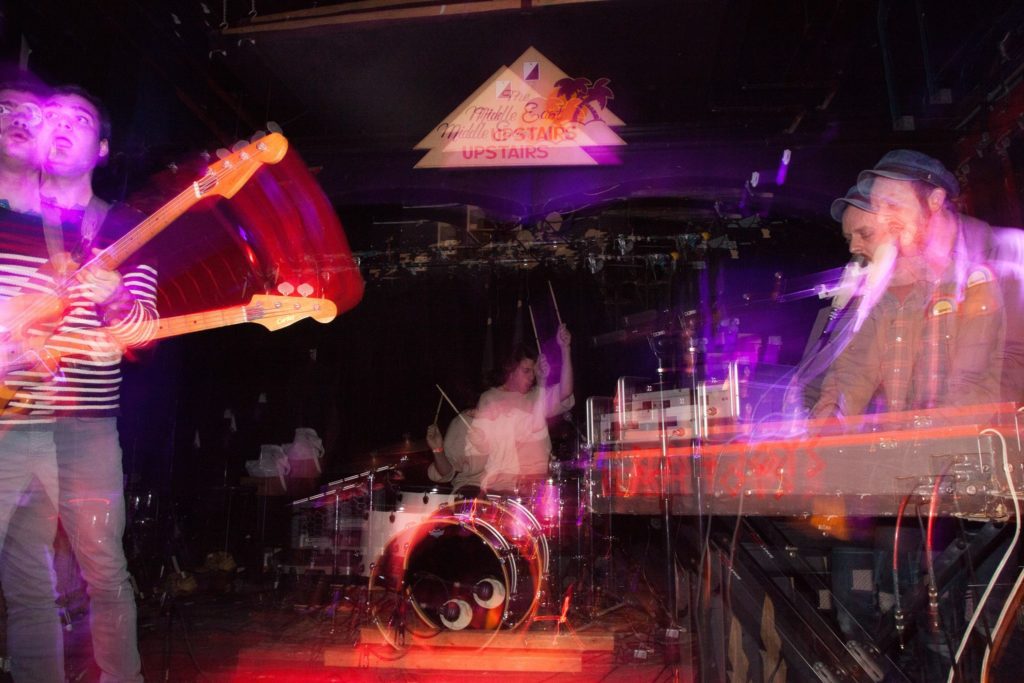 All photos by Sam Quinn.

Nappy Nina wastes no time on Double Down. The album, released earlier this year, runs 9 tracks and clocks in under…