You all remember the October of ’18? What a time to be alive. The Red Sox won the world series, Detroiters Season 2 was killing it, and that Banksy character hit the shred button on one of his paintings! Man, that Banksy, he really stuck it to the art world. I mean, what better way to say that the art world has its collective heads up their asses than to destroy a painting right after some rich fuck bought it as an investment! But wait, was it? I mean, it turned out to be a pretty goddamn good investment for said RF because that shredded painting is now worth twice as much. There was a pretty obvious outcome to that action, so then what was really the point? 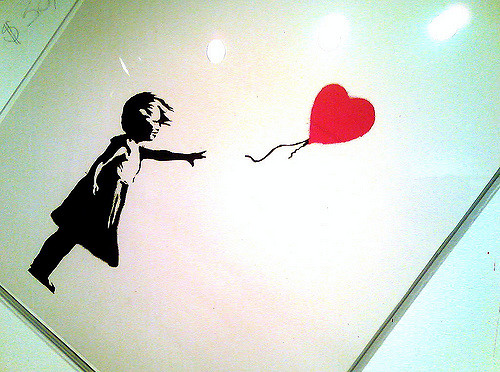 By pressing that button, Banksy turned his painting into performance. It is very unlikely that he didn’t know his painting would rise in value, and even more unlikely that he didn’t know the history of performance art and how it is monetized. Yves Klein made his Anthropometrie series a full half century before this, where people in blue paint rolled on paper which was then turned into greenbacks to keep his boat afloat. Christo and Jeanne-Claude regularly sell documentation of their projects (that may or may not have actually been made) and use that scratch to fund future projects and probably pay rent. There is a very long history of the documentation of a performance being the object that’s used to turn the art into cash money, and it’s really hard to think that Banksy was blissfully unaware of that fact. He pressed that button and the person that bought that shredded painting can now sell it for three times as much because A) it’s now a more unique Banksy piece and B) all of the publicity generated by the performance.

If you allow for the concession that Banksy knew the painting would be worth more after shredding, you have to rethink his intention from the start. Is his concept how inconsequential the physical well-being of the object he is selling is, and about how gross it is that the value is now increased due to destroying it? Maybe. But also, is that wrong? Ask any artist where the artistry comes in — the execution or the concept — and most will tell you the concept. If people are paying for a concept that makes them think and not just a wall decoration, then there doesn’t seem to be an issue with selling the evidence of a performance for more money than an untouched illustration.

In 2013, Banksy made another performance piece that seemed to be a more honest critique of money in art. The artist had a bunch of his paintings sold without fanfare in Central Park for $60 each, and then verified they were real the next day so their value went up to $20k overnight. This work holds a similar argument that something costs more not because of any inherent difference in the object, but because its worth is determined by other factors. The continuing problem with this idea is that we’ve all agreed to it on some level: The prettier fruit sells better at the supermarket even though it tastes the same. Society has agreed that value is a fluctuating and relative concept on a million different levels — So, is pointing that out a real critique, especially if it’s not a phenomena limited to the art world?

Another flaw in the thesis of Banksy’s $60 artwork performance is that his already established stature in the art world is what makes the piece successful. He’s using his giant, monetarily stable platform to say that the exchange of money for art is somehow corrupt, but he’s doing it from the vantage point of someone who really doesn’t have to worry about making a living in art anymore. Again, ask any artist who is grinding through their day to make a living in this vocation if they think the problem is that there is too much money in art and see what their answer is. Do people really think that most art buyers are too willing to overpay for their services and therefore the pursuit of creative making becomes meaningless? It’s really only something a small amount of artists deal with — It’s the equivalent to a billionaire complaining how much the special gas they have to buy for their private plane costs.

If his argument is “you sell your painting in Central Park for $60 and I sell mine in a gallery for $20k and they’re both the same product” or some other iteration of the Emperor’s clothes, again, it’s an easy argument to make when it has no consequence to you as an established artist. This argument also only works if you think he was using his documentary to say that Mr. Brainfreeze and he were really making the same quality of work. It really didn’t seem to me that he chose him for that purpose. The idea that every piece of art is or should be equal in value doesn’t even work within a single body of work for a single artist. All artists have their pieces that they feel like were more successful or less successful and it’s ok to have that be reflected in their value. 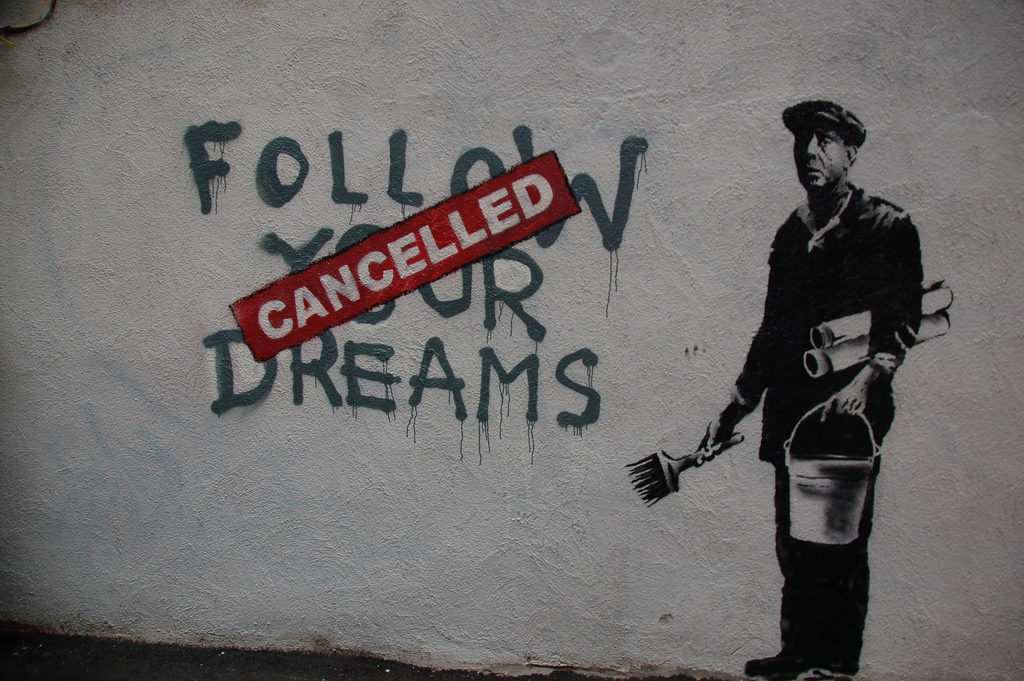 So, if that’s all true, what was exactly the point? My guess would be viral marketing! It’s not a “fuck you!” to the establishment as much as it is a press release for Banksy’s brand. Looking at his entire body of work, it’s hard to deny that a good marketing sense is one of Banksy’s greatest talents. I think his images are clever, and even just comparing his career to Shepard Fairey’s career, it’s easy to see that Banksy has more to say and more creative ways of saying it. However, that doesn’t mean he sometimes picks easy targets with thin arguments. He elevates the medium of street art past the majority of the work in the genre and raises it past a fully visual experience making you have to not only look at the image, but its surroundings and place in society in order to properly interpret it. However, I can not name another artist in my lifetime that’s received the same amount of mainstream media coverage as Banksy, and it’s not a coincidence. He knows how to stir up the perfect amount of controversy that’s not actually that controversial, and by doing so, he motivates people to talk about his work without facing much blowback from people that would potentially disagree with something controversial.

On some level, it feels like Banksy’s problem is really an internal issue with his own success. Kurt Cobain famously could never accept his level of fame because his contemporaries and the artists he admired never achieved what he did and he felt some version of Survivor’s Remorse over this. To interpret these attacks on the money as part of a guilt accompanied by seeing how much money his art is generating seems likely to me, but it would be a very armchair psychology from someone who’s only taken “Intro to Psychology” so I won’t do that. If it WERE true though, I’d say the answer isn’t continuing this myth about the evils of paying for art, but instead, put whatever you don’t want back into the pot. Instead of a $60 art sale performance in Central Park, give us a performance where you go through and buy out every artist in the park’s inventory for what they’re asking.

Listen, I like Banksy and am a fan. I thought Exit Through the Gift Shop was really fun. But, why does he seem immune from criticism that’s leveled at artists like Jeff Koons when he is just as guilty of using weak critiques of the monetization of the art world in order to make money from the art world. Even if it’s not direct money, it’s publicity gained from these actions that equals money down the road. At least Koons is more up front about it. The idea that art shouldn’t be about money is really just a gross mutation of advice you would give a burgeoning artist that your main motivation for making a piece of art shouldn’t be how much money it will bring in. That if you moneyball your art and start trying to create something based on what statistics or your intuition say will sell, it’s a losing endeavor for making good art. That being said, artists need to exist in a world that costs money of which a very limited amount exists earmarked for non essentials like art, and most of it is going to a select few artists.  Money in art is as dirty as money in food, or money in home repair and the idea that exchanging coin for art is immoral is as ridiculous as the immorality of exchanging money for anything else. Becoming an established artist is usually due to a combination of having the talent, doing the hard work, and the luck of being in the right place at the right time. For one of those few that got lucky to be railing against the art market while really generating a boatload of cash deserves our criticism. 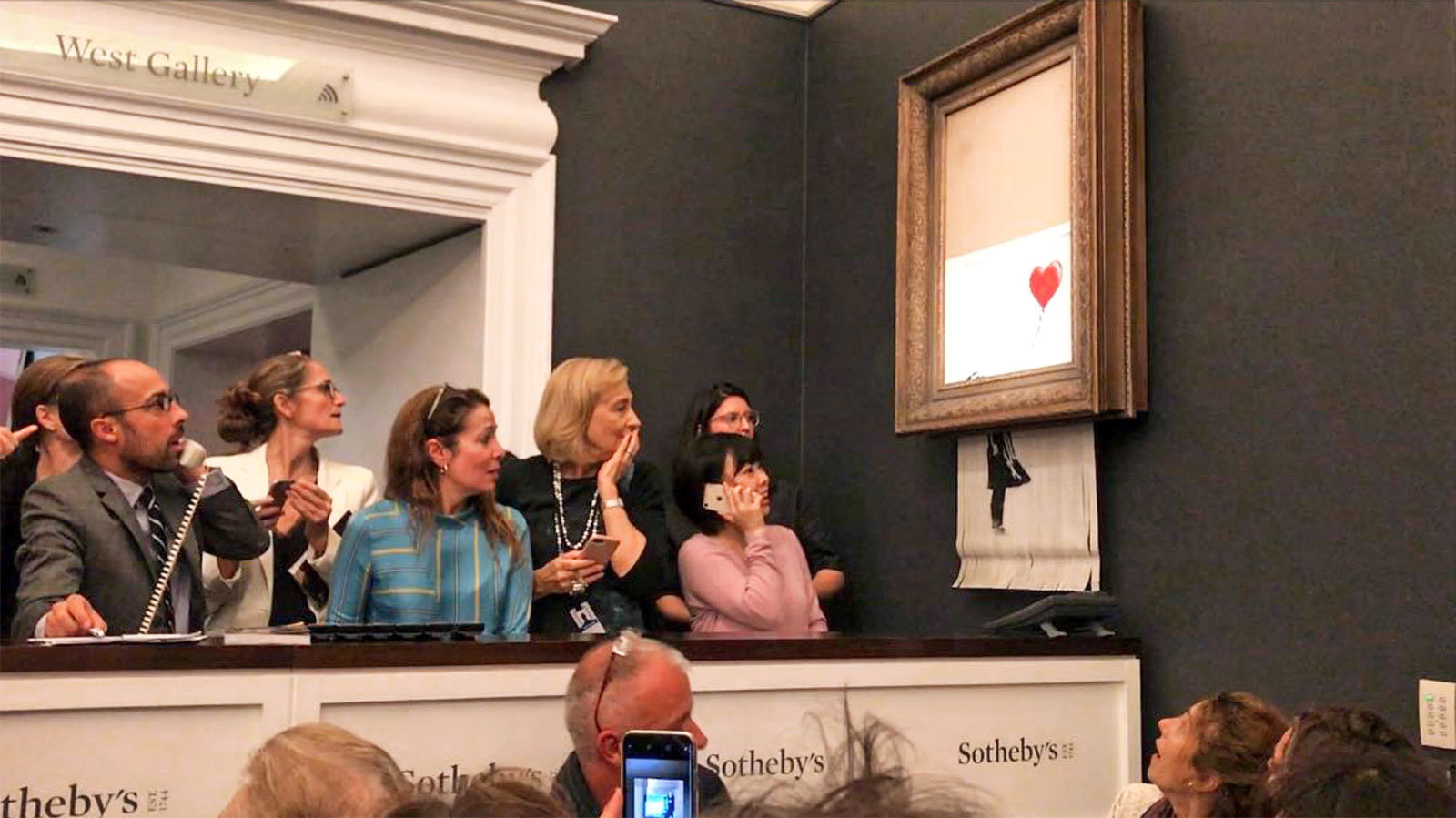 Also, I’ll just say that I find it highly dubious that the auctioning company had no clue this mechanism was inside the frame and this whole thing wasn’t a big set up with Mr. and Mrs. Sotheby pushing the big red shred button. Maybe jet fuel can melt steel beams, but to the Banksy and Sothebys Illuminati: you can’t melt my cynical heart! I’ll still keep checking out your stuff though. Especially if you start making pieces about how people need to buy more art for whatever price suits them.