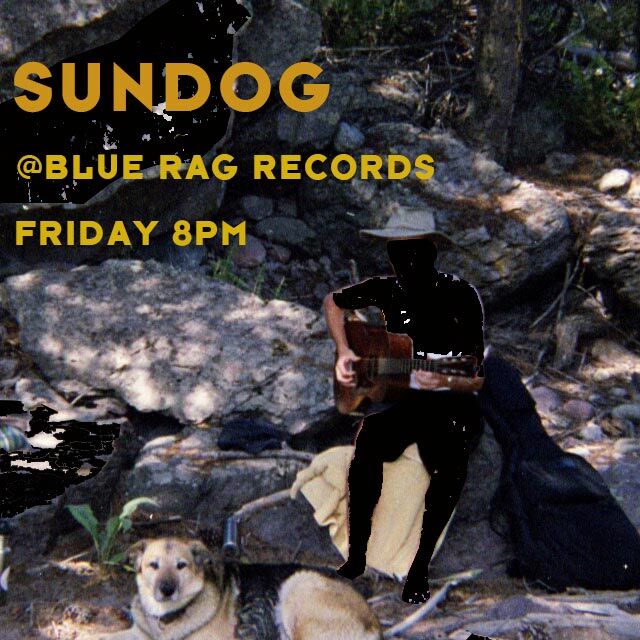 Ahead of this week’s in-store at Cambridge’s Blue Bag Records, Boston Hassle caught up with Sundog to gain some insight into his creative process and ways about the live show. Read the whole Q&A below:

BH: What setting do you find most inspiring/productive/enjoyable for writing songs?

Sundog: I write best when I am really busy and feel super stretched between lots of things. I also like writing when I have a large chunk of time to do only that. I wrote and recorded my first solo record on a farm in Montana one summer. I liked that setting.

BH: Aside from the artists you have covered, who are some of your influences?

Sundog: The music of blues musicians like Elizabeth Cotten, Joseph Spence and Charley Patton has been really important to me. Also Karen Dalton and Michael Hurley. Also Chris Weisman changed how I thought about songwriting when I first heard his music.

BH: I just checked out the Slinging live demos. The feel of those tracks sure stands apart from the solo material I heard first. Is that an ongoing band?

Sundog: Theoretically it is an ongoing band but we play very infrequently!

BH: Do you often recognize showgoers from other shows you’ve played?

Sundog: I do often recognize people from other shows; there is a pretty small community in Boston and if someone came to one show, chances are you might see them at another pretty soon. It’s not necessarily because they’ve seen me before or something, but I think the people who seek out shows end up going to a lot of them. There are some people who are seemingly at nearly every show.

BH: Do you reflect on the previous show when preparing for the next one?

Sundog: I definitely do that a bit. For a while I rarely played solo shows, but now I’m playing a bit more of them. When the solo thing was mainly a recording project I wasn’t really able to reflect on previous shows because at any given point it could have been 6 months since I’d played a solo show. Now I am starting to get to the point where I can actually think back to how certain things seemed like they were received or how certain songs worked being played consecutively and it is super helpful!

BH: How do you choose the songs for a show?

Sundog: For a while I always chose to play the most recent and the freshest feeling of songs. I felt like always playing the songs I had just finished writing; the prospect of testing out a new song is always exciting. I’m starting to appreciate the idea of playing songs for longer periods of time, though. There’s something nice about someone knowing a song of yours because they saw you play it before, unless they didn’t like it I guess.

BH: The split is really great introduction to you and Brittle Brian for new listeners. It’s artwork is also a nice reminder of Elmer Elevator’s adventures with the dragon, and the songs do evoke that same sunshine through-the-treetops kind of feel that the novella series does.  That was the idea right? If not, well, gee I just really enjoyed seeing that image again.

Sundog: I’m glad you liked seeing the image! I have to confess that I have not read My Father’s Dragon. I know, I am a lie. Victoria (Brittle Brian) was reading it at the time and came up with the idea of that image being used. I had looked through the book and she had told me things about it, but unfortunately I know very little about Elmer Elevator’s adventures with the dragon. I should read it I think.

BH: Aside from any possible surprises so secret that they can’t be alluded to, is there anything unusual you intend for this particular show that would be worth giving specific mention of?

Sundog: I will be trying a new-more-electric set that I have only tried once before, last weekend. For forever I have played my solo shows with just an acoustic guitar and singing, only sometimes through a mic. I’ve got this sweet new electric guitar that I’m enjoying, as well as a mic, some vocal effects and a tape machine. That is all I can say, but that is all there is to say. The surprise will be the result, though not totally a surprise since you now know what it will consist of.