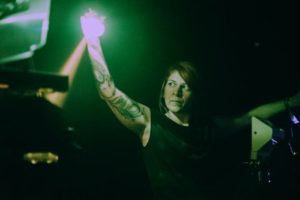 Montreal-based experimental sound artist Stephanie Castonguay reawakens and repurposes outmoded media equipment, hacking circuitry and reviving technological artifacts to explore ideas of memory and chaos. Her work blends between the realms of performance, sculpture and installation. Using discarded and obsolete machines, Castonguay explores the temporal nature of material experience within our technological landscape. I was fortunate to be able to briefly talk with Stephanie before her performance at Mutek in Montreal.

Boston Hassle: I was looking through artists and was really interested in the work you are making. I was curious about your process and practice. From the description “Scanner Me Darkly”, you are using modified optical scanners, could you elaborate on how you are doing this?

Stephanie Castonguay: Yes, so there’s two parts of this project. The first part is that I have hacked scanners, they are just the scanner heads, I use the speed of their rotation to control the speed of the oscillation. The scanners are emitting light, it’s an LED stripe and it’s really quite easy to hack, there’s a lot of tutorials online.

You go into the circuit to control them, I have this system with motors, DC motors like the fans and it allows me to stop the motion while its rotating without breaking anything. It’s not something that you should be doing using the electronics to stop the motor because it can create problems, but that’s fine, it’s just a nine volt motor and the way it’s made is having something like a fidget spinner holding the scanners and they are on those motors with magnets on top and bottom giving it a free spin to it all which makes it easy to disrupt the rotation and create those glitches. To stop them while they are turning and spin them the other way it’s kind of like a mode de jouer, a way of playing. Which I thought was interesting because you kind of you can have things that are really loopy but disrupt them physically.

The other part which is more interesting for me is where I have those solar panels. Usually solar panels are used to convert light to transform it into current, to power something. In this case I am simply amplifying the light, so what happens is the light that is being emitted from the scanners is being picked up by the solar panels, a filament transduction.

This is like the transformation of one energy to another. So in this case you have a visible light frequency and you transduce it into the domain of hearing. So this signal becomes amplified and you can hear this light frequency in a sense. I found this terminology in the book “Exploring light, radio and energy with projects” by Calvin R. Graf, he calls it “optical listening”. The whole performance is about hearing what you see, it’s about light making the music. It’s really this transduction part where it’s shifting the signal from the visible to the auditory.

BH: I was wondering if there is any specific reference to Philip K Dick’s work because the piece is called “Scanner Me Darkly”?

SC: His work, there is a really strong link, and I’ve been doing interviews and I kind of forgot mentioning it for awhile. I am interested in a way about memory and a lot of his work is about questioning reality and memory in a way.

The project itself is about this idea of persistence, optical persistence. The illusion that we see the world seamlessly and this is the limit of our perception creating the world, but actually the world is always an association. You don’t see it but the light frequency oscillator so fast the way that, I think it’s Henri Bergson that wrote about it, it’s just a mix of this optical illusion and overstimulation of the brain with residual images previously on the retina. This process happens so fast, a biochemical function mixing with the signal that goes in the eye. There’s a simpler way to explain. So there’s a part of your brain that is a part of the process of creating the illusion of the world. So I thought that was interesting to bring that title into this and the fact that I was also using scanners.

I thought it was really fun to take this title and re-appropriate it for this project because of this link with memory. There’s another link that I think is far fetched but the idea of the zombification of media. There’s this article from Medias Archeology called Zombie Media written by Garnet Hertz and Jussi Parikka. I refer to it a lot and I really like how they bring this up the idea of media archaeology but also ideas of emotions and notions related to circuit bending and reverse engineering in DIY. This idea about media being close to zombies because they remind us of our own death, this idea of planned obsolescence.

What it means is that even if you had the latest laptop, the latest smartphone, it’s never really, it’s planned to be dead, it’s kind of like dead and alive at the same time. This notion of being dead and alive, that’s really getting close to the zombification. It is kind of like you are inducing new life into these devices when you are circuit bending them, like you make it alive in another way going outside of the purpose that it was designed to function within and by doing that you are extending its life.

BH: You do a lot of repurposing and hacking, I was looking at some circuits and objects on your website and they are very surreal and other worldly. I am just interested in how you began and evolved your approach to working with different technologies and creating these objects.

SC: When I started at university, I was in visual arts and quickly got into programming. Working with Arduino and Pure Data, coding things was eye opening to me, that I could create art that was not necessarily adhering to classical ways of making art. I was interested in creating simple movements and simple feedback loops. I was into simplicity, of cause and effect. I was realizing it was also the notion of noise was always linked into my work, so everything I was doing was really noisy.

I thought that was interesting to me because the sound was a way of giving a new life to those objects. It was kind of like bringing out everything that seemed to be from an invisible world and putting it into focus. There’s a part of magic into it for me, the more I learned about electronics the more I really fell in love with it as a medium. I really liked to I read Daphne Oram, her work “An Individual Note: of Music Sound and Electronics.” She writes about electronic circuits that are really simple and she personifies them and the electrons moving into them as if they were alive. All this for me is like the way I hack, the way I create those installations.

BH: What are some experiences or artists that have been inspiring to you? I was also reading about your collaborative piece “New Goddesses,” you were reflecting on the history of women in technology, could talk about this project? You were talking about feedback and biofeedback and interactivity and how do these concepts of interactivity and collaboration feed into your practice?

SC: I think then again it’s always in the simplicity that I’m more interested in doing these collaborations. I worked with Émilie Mouchous, who also has a lot of experience doing performances and electronics, so it was interesting to combine both our backgrounds. Émilie was an artist who I really admired a lot, you were asking which artists have inspired me. I remember when I first started studying art, going to art centers and festivals I was trying to figure out what to do and what spoke to me. Émilie was part of those artists, I remember going to this festival Sight and Sound that is organized by Eastern Bloc and getting to see artists like Erin Saxton and Darsha Hewitt doing performances with hacked electronics. There was something magical about what they were doing, it spoke to me a lot, giving a new life to electronics and I think this is the common denominator: to bring something new out of it. There was an article written about the work I did with Émilie in eContact, and that goes more into detail about the project.

I wanted to kind of create a new story, we were just putting stories together and recreating stories where we integrated and created those goddesses out the world personas would have been so influential, creating these really big stories and at the same time using part of reality but a lot of imagination through them so it was a way to kind of like play with and capture the imagination and some people thought those stories were real they were like “oh you found out that this was the real story behind this invention?” no we kind of like invented everything around it but it was a way to get into this space and add this magic aspect to it.

It’s funny cause I don’t see that my work as being interactive or I don’t realize that it is because my perception of interactivity or installation is that it is really high tech and my interactivity is very lo-fi, just really basic and some, even part of it like for the biofeedback with Émilie or other work that I did, your body becomes a component in the circuit you become a connection and close the other connections and you see that a lot in DIY electronics where you become a capacitor or resistor and just change the resistance just by being there and other times you can be an antenna and when you mix all of this up it becomes more about this randomness like total randomness, but it is all linked to your presence.

BH: Do you have any people who are looking to start working with things like electronics is there any advice you would give advice to people with those kinds of ideas or interested in looking to work with physical circuits?

SC: it’s always good to start with having a project in mind. This is how I work, there is this much I don’t know but I know enough to get from one place to another. I just start and end up getting where I want and gaining knowledge through the project because then you are passionate and have the drive to go through it and to learn what you need to learn to make it happen.

There are really good tutorials online that you can find and there’s a book from Forrest Mims “Getting Started in Electronics”, and another one that I recommend is Nicolas Collins’ “Handmade Electronic Music”. I think that there’s two ways of seeing it, to want to be an engineer and really know the components, how they work and interact or you can kind of be the experimenter and try to see whatever happens and evolves with the process.

BH: Do you have any future projects you would like to talk about or are you taking scanner me darkly any place in future

SC: I am really lucky Mutek has invited me to go to Lima, Peru to present the work next month, Lima has a really interesting history in experimental music. I am going to continue working on the “Scanner Me Darkly” project because there are so many possibilities and I want to try to reverse the process, and see what the scanners are actually seeing and kind of work with this data, that is the next step.