When I first came across this band at a show in O’Brien’s in Allston, I went into the performance skeptical and not knowing what to expect. I was quickly won over by their music and their energy on stage. The presence this band brings to their performance is fun, vibrant, and atmospheric. They’ve shown a great deal of growth as a group even in the 3 times that I’ve seen them live, and I’m consistently impressed by their song writing. 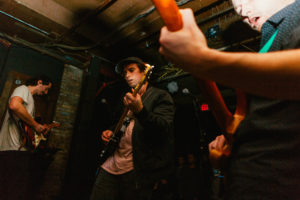 In an interesting PR move, Colbis The Creature recently removed their self-titled debut EP from Bandcamp with the intention of reinventing their sound. They said that the first EP was a way to get started as a band, but not something they loved in the long run. Now, they’re working towards a new era of Colbis. The band has a full-length record coming out this summer that they see as the defining statement of their sound, especially since their live shows are comprised almost entirely of their new material.

This is not a band to sleep on if you’re looking for what’s new in the Boston scene. Keep your eyes peeled and your ears open for word of their next performance in the city; be it in a basement or “legitimate” venue, Colbis The Creature is a band definitely worth seeing and getting to know.

Check out their new tune “Lainey’s Room” featuring Topsy from And The Kids below: