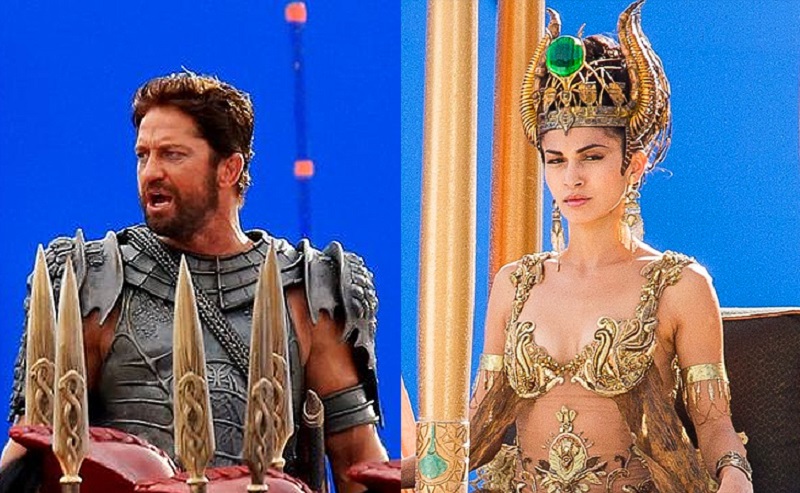 In this scene, Gerard Butler paces back and forth across a blue screen and yells at people.

It’s 7:30. We’re half an hour into Gods Of Egypt because I checked my watch. I assumed we were most likely half way through this torturously slow 127 minute movie that started at 7, but boy was I wrong. So far, a One Direction reject is running around a bunch of ugly video game levels to grab some magical glowing body parts in booby trapped temples so he can gain the power to fight evil dictator Gerard Butler. Once in a while, people randomly turn into CGI things and then a bunch of pixels obliterate your senses by reducing your brain to mush. At least I didn’t pay to see this. And I hope you don’t either.

Earlier today, Amazon delivered me my new bedframe. I’m going to have so much more space in this apartment once I figure out what to do with the old frame. The pieces of the old one are currently cluttering my floor, and my bedroom is now an obstacle course that could cause injury to anyone who attempts to traverse to my bed. The suspense over whether I’ll trip over the remnants of my dismantled IKEA bedframe when I get home are pretty similar to the bulk of the action scenes in this movie. If you enjoyed watching your friends play video games where people jump across computer generated platforms, Gods Of Egypt lets you pay $15 for the privilege in crappy looking 3D. To add to my frustration, I’m also really hungry. I worked from home today and subjected myself to a diet of Girl Scout cookies because I’ve been too lazy and burnt out this week to even walk to Star Market. The dramatic stakes are high. I’m debating in my mind which nearby restaurant/bar to the AMC Boston Common theater I’m going to hit after I escape this movie. Will it be a taqueria? A burger joint? A dive? If you’re wondering why I’m talking about this, it’s simple. Both of these plot points are more compelling than whatever the hell is going on in this movie.

Who needs actors when you can have CGI bird-people?

It’s now 8:10. There’s still 50 minutes left of watching white people pretending to be from Egypt deliver dull exposition in front of digitally remastered Windows 98 screensavers. Academy Award Winner Geoffrey Rush makes an appearance once in a while as a god who can turn into a CGI fireball with his face on it because it’s clear the screenwriters are making this shit up as they go along. I’d be embarrassed for everybody involved in this movie, but nobody’s going to remember it by the end of this weekend. The actors on the other hand seem to be getting a great deal out of this. If I was getting paid more than what I probably make in a year to pace around a blue screen and deliver dialogue that wouldn’t cut it in Thor fanfiction written by a middle schooler, I’d sign up too. After delivering a crappy monologue and/or stabbing somebody until they bleed golden blood, I’m just going to get turned into a CGI pixel bird-person thing anyway. I don’t need to be on set for that. That’s the effects team’s job. Normally, you’re supposed to film the actors and add the special effects after. This movie’s doing it in reverse.

For a movie featuring people who turn into winged CGI metal Transformers and shoot fire lasers at each other in ancient Egypt and even outer space, it’s really fucking boring. For a movie that should be borderline psychedelic in colorful visuals, the whole thing looks like it was engineered in post production to look as authentically filtered through sewage as possible. Hell, even the afterlife looks like a Creed music video.

And the 3D is just making this whole thing worse. I’m going to have a headache by the time I get out of this (UPDATE: I had a headache at the end of this movie). Once in a while, physical actors are showing up to this cheap looking special effects reel to remind you that you’re not watching somebody play their PS3. But a PS3 is way too graphically generous given how crude things look in a movie that reportedly cost $140 million, or barely less than Mad Max: Fury Road. Just to really put things into perspective, this figure hovers around the same pricetag as Jeb Bush’s failed presidential campaign. But at least that was entertaining to watch.

There’s something sketchy about the financials here. There is no way this could have cost $140 million. I can’t recall seeing anything resembling actual sets or any special effects that could be considered state of the art or even expensive looking. The biggest name in this movie is the guy who yelled THIS IS SPARTA nearly 10 years ago and spends the runtime loudly yelling speeches. Did the cast and crew misallocate funds? Was everybody just heinously overpaid? Was this just incompetently directed? (well… yes. but). Is this just a pyramid scheme? Did nobody care? Is this whole movie just some Producers style scam? I’m confused.

There needs to be a disclaimer in this review somewhere that as outrageous as I’ve made this movie sound, it doesn’t mean you should actually spend the time or money to watch it. It takes a very special level of incompetence to make something this ill-conceived and over the top feel like an endless void of boredom. I thought it would never end, but I’m alive.

It’s 9:00. It finally ended, and I’m about to hit Rock Bottom (the bar, not the metaphor) in the hope that alcohol can eradicate the memory of this movie. I should have cleaned my room and ordered Thai food. But hey, at least you all got a review out of it.

Want to see Geoffrey Rush turn into a fireball in outer space while getting yelled at by the 300 guy? How about I save you $15 and your dignity.