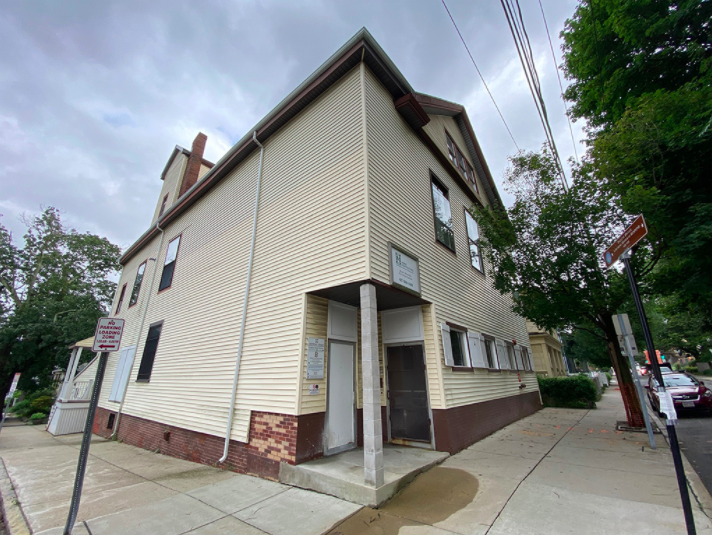 Central Street Studios is on the upper floors of a house in Somerville. The landlord’s construction company is on the ground floor. (Photo: Marc Levy)

“Can we get a dumpster?” isn’t a question an artist asks every day. But it is the question being asked by Bethany Noël and some 20 more artist-tenants at Central Street Studios who learned in mid-June that they will be displaced from their building come Sept. 1.

The three-story building at 57 Central St. in Somerville’s Spring Hill, across from the Somerville Museum, is being prepared for private development by the building’s owners, Paul and Karen Morse, artists were told. Paul Morse is the owner of Morse Construction, whose offices occupy the lowest level of the building.

Central Street Studios has been a workspace for artists for more than 35 years. “It is incredibly lovely, and there are a bunch of people who are making beautiful work in that space,” said Noël, who has been a tenant at the studios for eight years.

Though the artists had asked the Morses to give as much notice as possible about potential displacement, they were given less than 90 days to pack up and go. 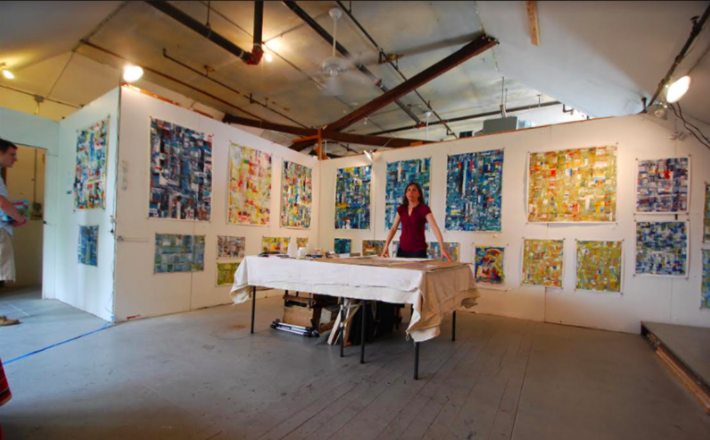 Nancy A. Kramer, a third-floor tenant at Central Street Studios, shows her works during a Somerville Open Studios event. (Photo: Nancy A. Kramer)

The closing puts the artists in a difficult situation: Affordable studio space in the Somerville and Cambridge area is extremely rare, and usually involves years on waiting lists. The closing of Central Street Studios edges working space for artists in Somerville toward levels of endangerment, and artists studios have shuttered in Cambridge and Boston as well. The Cambridge community is still reeling from the closing of the EMF building in the summer of 2018 and the Green Street Studios dance facilities in 2020. In the Dorchester neighborhood of Boston, the Humphreys Street Studios are under threat of displacement.

Somerville Arts Council officials admitted that they are worried about the Vernon Street Studios and Joy Street Artists Studios as well, Noël said.

There is not a lot of money for property owners in protecting artists’ spaces. Thea Paneth, a painter and a founding force behind the annual Somerville Open Studios event who has worked at Central Street Studios for 35 years, said she wasn’t surprised that the building owners decided to end artists’ leases.

“I’ve loved being here in the building in Somerville, part of the artist community, part of Somerville Open Studios. I’m sad to leave, especially since we have not had an SOS for the past two years,” Paneth said via email. “Moving out is difficult and traumatic, but at the same time I know we have been so lucky to have the space for such a long time.”

The loss of the art space will diminish the open studios, an attraction since 1999, in a time of badly needed economic rejuvenation, Paneth suggested.

A 2019 study showed Greater Boston’s arts sector not only serves more people than the Red Sox, Celtics and Bruins combined, but contributes $2 billion into the local economy. The arts contribute 4.3 percent annually into the Massachusetts economy, or $21 billion – more than construction fees – yet got only $11.4 billion in compensation in 2015, the Americans for Arts Action Fund said. The arts economy in Cambridge alone was valued at $175 million annually in a 2017 study.

Noël is worried what the closing on Central Street will mean to her and the community as a whole. “Think about what Somerville would be like without open studios. Or without Honk! or without the other festivals. It is not going to be what want; it is not going to be weird. We don’t want to push the arts out of the town, and that is really what is happening,” she said.

Many artists are forced to look for space in the suburbs of Boston or other, more affordable city centers such as Providence or Worcester. Noël said she and a group of artists are looking in Somerville and Arlington, but also throughout the suburbs.

“I am looking at spaces along 495. Lowell and Rhode Island have a lot of studio spaces, you can find some spaces in New Bedford – but again, that is far away, hard to get to and is a different community,” Noël said. “If you know of anybody who is interested in working with other artists to buy a space, protect a space, I would love to be put in touch. If you know anybody who has a space that really wants to work with artists. I would love to be put in touch there. The only thing I can do is I am reaching out to just about everybody.”

This article originally appeared in Cambridgeday.com