This week our Artist Spotlight Series takes the form of a visual and written conversation between artist and educator Rachel Rizzo and the Hassle’s arts editor Maggie Jensen.

Maggie Jensen: Are there particular social qualities to your creative practice, and/or how does your relationship with your community fuel your ideas?

Rachel Rizzo: I am currently on the committee that is putting together Ladyfest Boston 2017 and have been involved in booking and attending shows and making album art and flyers since I was 13. The DIY mentality permeates my practice in many ways, but I do feel a little distance between what happens in that world and what happens in my studio. That probably has to do with the solitude of painting and drawing vs. the community engagement involved in a music/art scene. 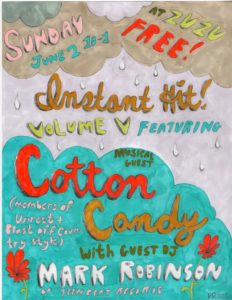 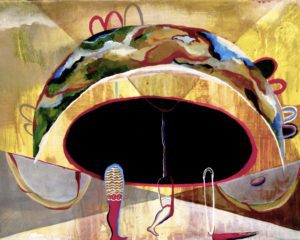 My practice also includes teaching, which is definitely a social enterprise. I’ve taught everyone from early childhood to old age at museums, non profits, schools, living rooms and workshops, and am currently going on my 4th year as the visual arts teacher at a Boston public k-8 school. When I am making a piece though, it really changes from work to work whether there ends up being an overt social message, and I usually don’t really know what is happening until it’s finished. Most of my work is personal and biographical with no direct intention of making a political statement… that being said, I am definitely a believer that the personal is political, so politics make their way in whether I initially intend that or not. My interaction with the public comes into my work more directly when I start thinking about how to make things, not what to make. I’ve always found that young/new artists come up with ways of seeing and making that I had never thought of, and being around that kind of freshness is influential. I think people who have been making work for a long time, who went or are going to art school, or are involved in a really serious practice can be fearful about how to do things and get caught up in the “right way” of thinking and making things. 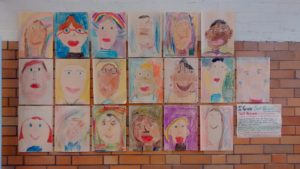 I used to work (and still sometimes pick up a shift) at Gateway Arts in Brookline village that is an art studio/gallery/store for adult artists with disabilities and psychiatric diagnoses. There is a huge range of practices there, but one thing that unites many of the artists there is the absence of fear and judgment when it comes time to make something. Watching someone who can’t see create a drawing or sculpture is pretty amazing. This isn’t to say that I think it’s exactly the same thing…that artists with disabilities or psychiatric diagnoses are working within the same framework as other working artists, because a lot of the time they aren’t worried about results in the same way. Much of the time their processes are more tied up in things like compulsion, repetition, obsession and therapy. There are many shades of gray here, but my main point is that working with so many different kinds of people and watching them figure out how to make things really helps me break down my own list of arbitrary rules about “good work” and art-making. I think it’s important to break out of the vacuum of art within the academy. Also I’m really really horrible at self-promotion because I haven’t found a way to do it that feels right, so I don’t have a website or anything like that. Kind of self-sabotaging, but I’m in grad school working on an MFA right now so hopefully that helps me resolve those feelings a bit. 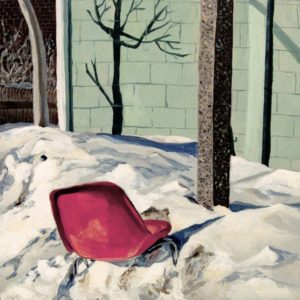 MJ: Do you ever wish you could create an entirely different space for displaying your work outside the traditional white wall gallery model?

RR: Absolutely. I’ve been involved in a few shows in DIY spaces, bike courier offices, public schools and classrooms and a lot of people see my work through show flyers and stuff like that, so it’s something I’m already engaged in. Again, I think it is important to engage with the public outside of the academy, but that doesn’t mean I don’t also have the dream of seeing my work in MoMA like every other working artist. It’s a complicated thing, wanting to be beside all of those artists you admire inside the walls of institutions that some of your best viewing and thinking has happened within, all the while knowing that art museums are funded by Wall Street and are architecturally similar to prison complexes, and seeing what kind of bullshit you’ll have to engage in to be part of the gallery world… but all this grad school debt and all these paintings stacking up in my living room aren’t doing anyone any good. I haven’t found my place in that. 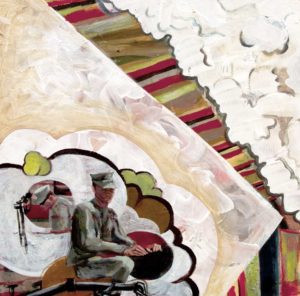 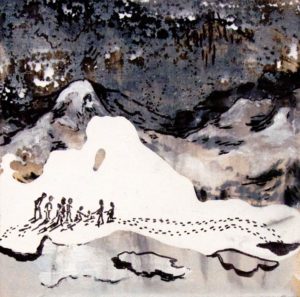 MJ: And what kind of sound fuels you the most during the making process, or what would be the soundtrack for your paintings?

RR: I listen to everything. I’m a pretty big nerd about music…it’s hard to give a straight answer, so I’ll just tell you about the summer 16′ playlist I made which includes Dawn Penn, The Blue Rondos, Susan Cadogan, Family Fodder, Parliament Funkadelic, Devo, Tom Tom Club, Ghost Town Djs, Chance the Rapper… I’ve had Flashlight by Parliament Funkadelic stuck in my head all summer and I’m not mad about that. Although that list doesn’t reflect it, my overall most-listened-to genre is post-punk. Kleenex and The Raincoats are two of my favorite bands because they are kind of every genre happening at once. 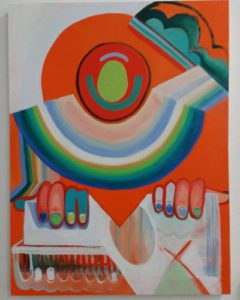 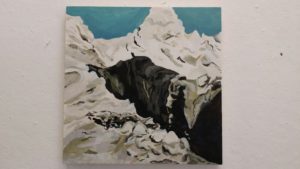 Rachel Rizzo: Is it possible to work both within and against something?

Maggie Jensen: Absolutely, in fact I always keep that idea in mind when making work. As consumers of images we are so often placed in histories that we struggle to filter through our bodies/understand as our story as well. But we are pushed along by the inevitable flow of institutional canon-shaping norms. Expecting a change in perspective from the powers that be is of course great, but why not have some fun on our own? If I can make myself more comfortable within a history that rejects the actual physicality of the female body by a selective editing of that history I will. It is not entirely destructive, through the making/erasing process I am both empowered by the images I am appropriating as well as asserting power over some specific aspects of them. I have become oddly familiar and loving of works of art that would have barely peaked my interest way back in my freshman art history course. 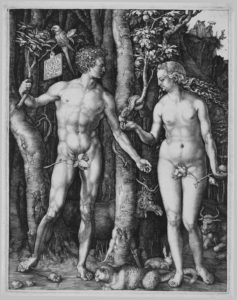 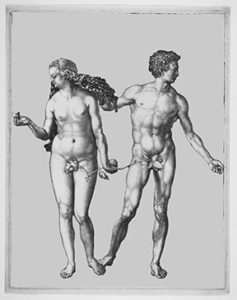 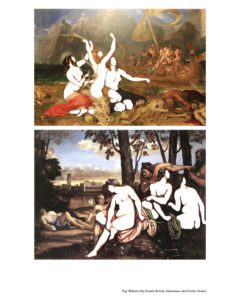 RR: How can we avoid tokenism and promote inclusion at the same time?

MJ: In terms of an individual effort, I think of lot of it comes down to consistency over time. If you as a maker or organizer are concerned with providing space for the say (in very general terms) the non-cis white male body, or people working from a lower economic bracket, or those with disabilities – than make absolutely sure that every time you create a show you invite over at least over half of artists that see themselves as fitting into the “categories” you say you want to support. Additionally I think it is important to be conscious as an artist of who is participating in shows with you. It is perfectly acceptable to bow out of something because you find it non-inclusive. I think it is very difficult and we (I certainly have been) are guilty of taking easier routes. However I believe that by keeping this intent as a priority the results will present positive shifts in what is represented and who is provided space. I guess creating a model of extended awareness, rather than following suit in the moment.
On an institutional level I see a lot of problems arise when one department reaches outside of itself but then is not supported by other internal key figures. So often education and community outreach programs are set in place and lauded by the larger organization but then not supported through say marketing efforts, or coinciding events, or a large donor. I believe it is critical that if a mission to open up to the actual diverse public body is defined, then it must be followed through by not just the already more creative and flexible departments of the institution.

RR: What role does humor have in art practices (yours specifically or others you are interested in)?

MJ: A while back I was working as a gallery attendant/guard during a retrospective of Amy Sillman at the ICA Boston. When the exhibit first opened I was filled with both the anticipation for something new and nervousness typical of those of us required to spend countless hours with any given show. This apprehension included hoping we were engaged by the artist’s work as well as by the curation of it. Retrospectives can be tremendously boring and for an artist like Sillman whose formalist paintings took awhile to capture a minimalist/conceptualist obsessed art world, I expected the show to say “look see, her work fits here and here – why didn’t you like her all along”, and leave it at that. I was clearly not very aware of the Sillman’s work. Not only was the unbelievable experience of color and form enhanced by seeing so many of her paintings together, but we also found out how funny she is. Through comic illustrations and zines she poked fun at the very language of art that had placed her as “behind-the-times”. At the same time this humor lent the work a kindness that allowed the viewer to feel that this art vernacular might be in part accessible to them, even if they were not part of the so-called cultural elite. 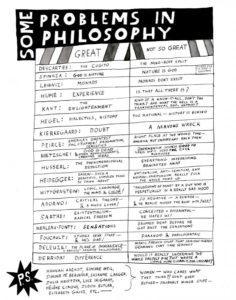 Amy Sillman, Some Problems in Philosophy, 2010

I ended up learning a lot during my period spent with her work, but I think the most important lesson was to not take everything so goddamn seriously. Because being serious in the art world is a really easy way to conform to its standards and limitations. I began working on my zine Accordion as a result. I wanted to create a space where creative folks could share work and ideas that might be outside of their typical practice, or in an experimental phase. I wanted to build links between what people were working on in their studios and perhaps break down some of the assumptions we have about what constitutes “gallery ready” work. I’m very glad that I realized early on that the most insightful conversations that I have had with peers have been informal ones that left all the artspeak at the door. 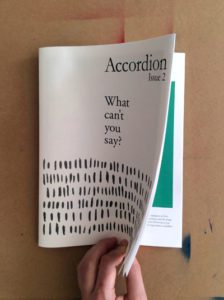 5 QUESTIONS WITH MALLIKA CHANDARIA OF THE 98

I’m With SECSE: An interview with the organizers of Boston’s sex educators strike

Solidarity with East Coast Sex Educators has been on strike against Good Vibrations since August 15th.