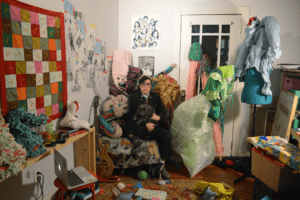 Often in interviews or artists talks artists are asked who or what inspires them. I think that this is the wrong question to be asking us, especially now that it’s 2017. Those of us who survived 2016 both saw and lost a lot of inspiring people and things. Now it is 2017, Donald Trump is our president, and I don’t want to talk about things that inspire me. I wish someone would ask me how I am and how I plan to take care of myself in 2017. This is the problem with the art world we don’t care about each other, we just want artists to produce. I do this too. I would be super bummed if my favorite musician stopped making their songs.

Today I am sick. I tried several times to go to work this week and each time I had to leave early because I was about to keel over. I work at an art museum. This week I have been to the ER, Urgent Care, and the vet. Scott, my cat, is also sick. This morning, determined to meet a deadline at work and despite friends, my mom, and my boss telling me to stay in bed, I pulled myself into the shower to be awake enough to go to work. Side note, I totally pee in the shower. It’s just a nice place to pee, it’s warm, you’re naked, it reminds you that you’re an animal. So, I am in the shower, urinating as one does, and I’m pissing blood. Surprisingly, I didn’t feel as metal as I thought I would. Instead, I sat down in a tiny pool of pink piss and I thought to myself for the first time, “it’s just art.”

As a curator, it is my job to provide artists the opportunities to tell their stories. As an exhibition manager, I help artists craft spaces to tell their stories. In my own art practice, I tell my stories and hope they are universal enough for someone else to give two shits. A girl on the phone asked me what I do when I am not “arting”? If I were smart I would have said taking you out on a date. If I were interesting, I would have said literally anything else — but I didn’t have an answer.

I art. It’s who I am, even when I am sick in bed and the last thing I want to do is art. The last thing I want to think about is my stupid, gay, feelings or how I’m going to fund my next project. What’s that dumb line about a shark? If they stop swimming they die? Well, I am the opposite of a shark I swam and swam and now I am pissing blood.

So, I want to talk about downtime. About not “arting”. About other parts of me, that are often smashed by my gigantic art ego. Call it self-care, call it self-involved, but at the end of the day, I am a 31-year-old who spends way too much money on her art “career” with a pissed off urinary tract.

Here is a weird list of stuff I do on the internet and in actual life when I am not arting. Oddly enough it all contributes to the work I make — but this is the fun part about making. Not the performance or the hours of hot-gluing, but the wandering. The imagining. The listening. The finding other things, other artists, other people that make my art practice less lonely.

I have been listening to this dude’s music for over a decade. He is my go-to songwriter. Bazan is so good at his craft it hurts. Each of his solo albums post Pedro The Lion’s break in 2005 have been good listens. For fans like me, who were trailing Bazan’s break with Christianity with our own, it was hard to let Bazan grow. I wanted him to forever be the voice to my personal break up with religion. But Bazan’s music continues to expand and his new album, Blanco is no exception. Also, could every bearded, bear, man — cis, trans*, and other — send a video of yourself crying and singing “you are worthy of love” repeatedly to [email protected]? Because I could really use that in my life.

Nostalgia is a sadness without an object, a sadness which creates a longing that of necessity is inauthentic because it does not take part in lived experience. Rather, it remains behind and before that experience. Nostalgia, like any form of narrative, is always ideological: the past it seeks has never existed except as narrative, and hence, always absent, that the past continually threatens to reproduce itself as a felt lack. Hostile to history and its invisible origins, and yet longing for an impossibly pure context of lived experience at a place of origin, nostalgia wears a distinctly utopian face, a face that turns toward a future-past, a past which has only ideological reality. This point of desire which the nostalgic seeks is, in fact, the absence that is the very generating mechanism of desire. […] the realization of reunion imagined by the nostalgic is a narrative utopia that works only by virtue of its partiality, its lack of fixity and closure: nostalgia is the desire for desire.

– Susan Stewart, On Longing: Narratives of the Miniature, the Gigantic, the Souvenir, the Collection

So, I’m going to go out on a limb here and quote Adam Sandler …

This book is difficult but I am working my way through it. Eventually, my hope is that it will give me some language for why I make gay, feelings art.

#3 Thinking about death with monsters and machines…

I love to see Big Bird pissed off.

Something that I don’t really talk about a whole bunch is my attachment to being a shitty musician. I say shitty because music is not a thing that I’ll ever get really good at. I’m not committed the way I am to my visual art practice. Playing music feels fun though, and that’s why I do it. Visual art is pretty isolating. Even when collaborating, I spend most of my time alone. Playing music helps me hang out. My friend, Delia Kovac, and I started this band a few years back, it took us two years to play in front of other people. Our shows are 80% banter. There is little difference between our live show and just two queerdos hanging out and shooting the shit. People seem to be into that. For me, our shows, banter mixed with songs about Star Trek, leadership, bodies, moms we hate and therapists, are important because it showcases female friendship. Our band isn’t so much about the rock, though we try, we are about performing friendship. Holding friendship between two queer women up as being equally as cool or powerful as rock and roll.

You can find more images and video of BED DEATH at jruretsky.com/bed-death

This list started with a crying dude and we’ll end with one.

But really, my favorite thing to do when not arting is watching TV and crying. Just me and Scott hanging out in our bed, letting loose with the big ugly cries. This is really my most creative space: getting lost in the catharsis of consumer culture. TV shows are crafted to provide viewers with a 20-minute emotional roller-coaster because it feels good. It feels awesome to relate to Nomi and Amanita from Sense8 for being Nancy Drewesque, crime fighting, badasses. That’s right, they fight crime with their smarts. Take that The Patriarchy. Seriously, this shit feels good to participate in this way. Total projection. Total escapism. And on a day like today, when I am pissing blood, it’s okay to sidestep my life as an artist. The slow, upward shuffle that I chose. And now, or today at least, I’m choosing to sit down for a little while and look around.