Proudly presenting the first of a new weekly series that focuses on the makers and doers in our community. We hope this will be a safe and experimental platform for the sharing of ideas and voices.

The Art of Translation:
Musings of an artist who makes conversations tangible
By Chanel Thervil

More and more I’ve come to realize that my role as an artist and educator is that of a facilitator.
At the core of what I do, I believe three things:
Art has power.
Words have power.
People have the innate ability to produce both.

The hard part is activation of those things.

For my Public Art Residency at Boston Center for the Arts (BCA) this summer, I set out to activate those three beliefs with my project “EMERGENCE: What does hope look like?”. The first component of this project was having some SHARE SOME HOPE Community Survey events, where participants got to draw or write their response to the question “What does hope look like to you?” and have conversations with me about their response. As product of our conversation, I then generated a symbol that embodied the participants interpretation of hope. The symbols final home became a space within a sculpture that would act as a communal tree of hope for the neighborhood on the BCA Plaza.

One of the things that surprised me when embarking on this project was the fact that people think what I do is magic. While artists are pretty cool people, I am but a mortal who is good at creating systems that can be utilized over and over again. The steps for SHARE SOME HOPE were as follows:

Step 1- Much like a scholar or researcher, after listening to their interpretation of my question, I asked community members more questions that put a focus on what they were expressing about hope. The underlying idea here is that attentive listening will lead us both to understanding. 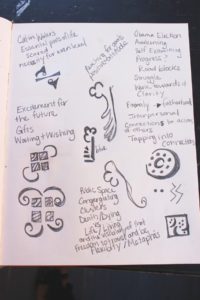 Step 2- Then I jotted down notes in a brainstorm-y way. Mostly keywords that rose from the things that community members said to me. Because I actively did this as we engaged in conversation my writing was pretty messy, but I made a point to have my sketchbook open so that as I wrote the person I was speaking to could also see which of their thoughts had made an impact on me. 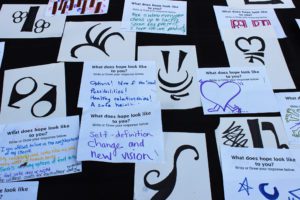 Step 3- After the listening and the note taking, came the sketching. That was a totally collaborative process because as I began drawing, the person I was talking to would give me feedback on how they thought the contours related to their ideas and our conversation until we found common ground. 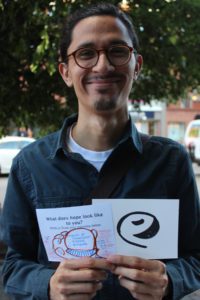 Step 4: The final step was inking the last draft of the symbol and stapling it to the participant’s original response on paper. Once the community survey events were over, it was time to go to the studio to translate the sketches of symbols into the design of the sculpture. 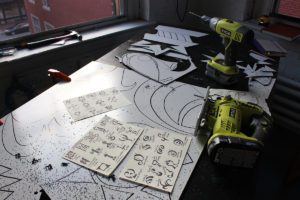 One of the most beautiful and unexpected byproducts of this survey was the willingness of people who stopped by to a have full conversation not just with me and my assistant (fellow artist Charline Xu),but with anyone else who happened to grappling with responding at the table. It was also really lovely experiencing families stop to make responses together. The fun part in that was seeing all the ways in which individual responses varied from spouse to spouse, parent to child, and sibling to sibling.

Because the SHARE SOME HOPE Community Surveys took place in the midst of a shooting at Jeremiah Burke High School and the nightclub in Orlando, people came to the table trying to process many emotions including fear, frustration, and anxiety. Although I could not provide a solution for what happened, it did seem like the act of thinking about hope and putting out positive affirmations of sorts chipped away small pieces of the burdens people brought to the table with them. Overall, many peoples’ visualizations of hope involved peace, love, and a stronger connection to others and nature. 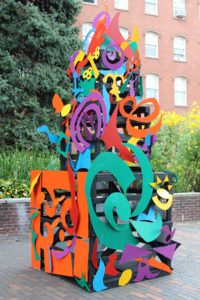 To view all of the forms hope took during Chanel’s residency follow her blog by clicking the link: http://www.chanelthervil.com/emergenceblog/