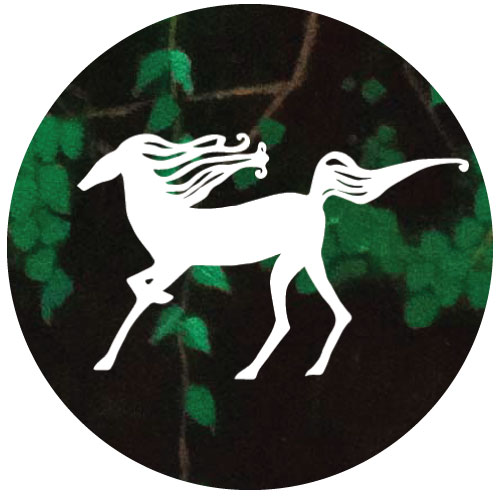 Leah Brunetto is a local artist working in the Cambridge area. In this Artist Spotlight she discusses her ongoing art project, a series of illustrations inspired by the Chinese New Year.

Though my own connection to the country of China itself is remote, celebrating the Chinese New Year, which lands sometime in January or February, has been an important part of my life for as long as I can remember.

As an artist, the Chinese New Year has inspired and defined me, and the holiday has become the subject of my lifelong art project, a diary of illustrations that incorporates the animals and natural elements that represent each year in the Chinese Zodiac. The themes I explore in this series have also influenced the way I brand myself professionally. My website’s ‘Running Horse logo’ was inspired by an illustration I made for the Year of the Horse, the first illustration in my Chinese New Year series. The horse in this illustration is simultaneously in motion and firmly grounded, a balance I aspire towards in both my work and my life. 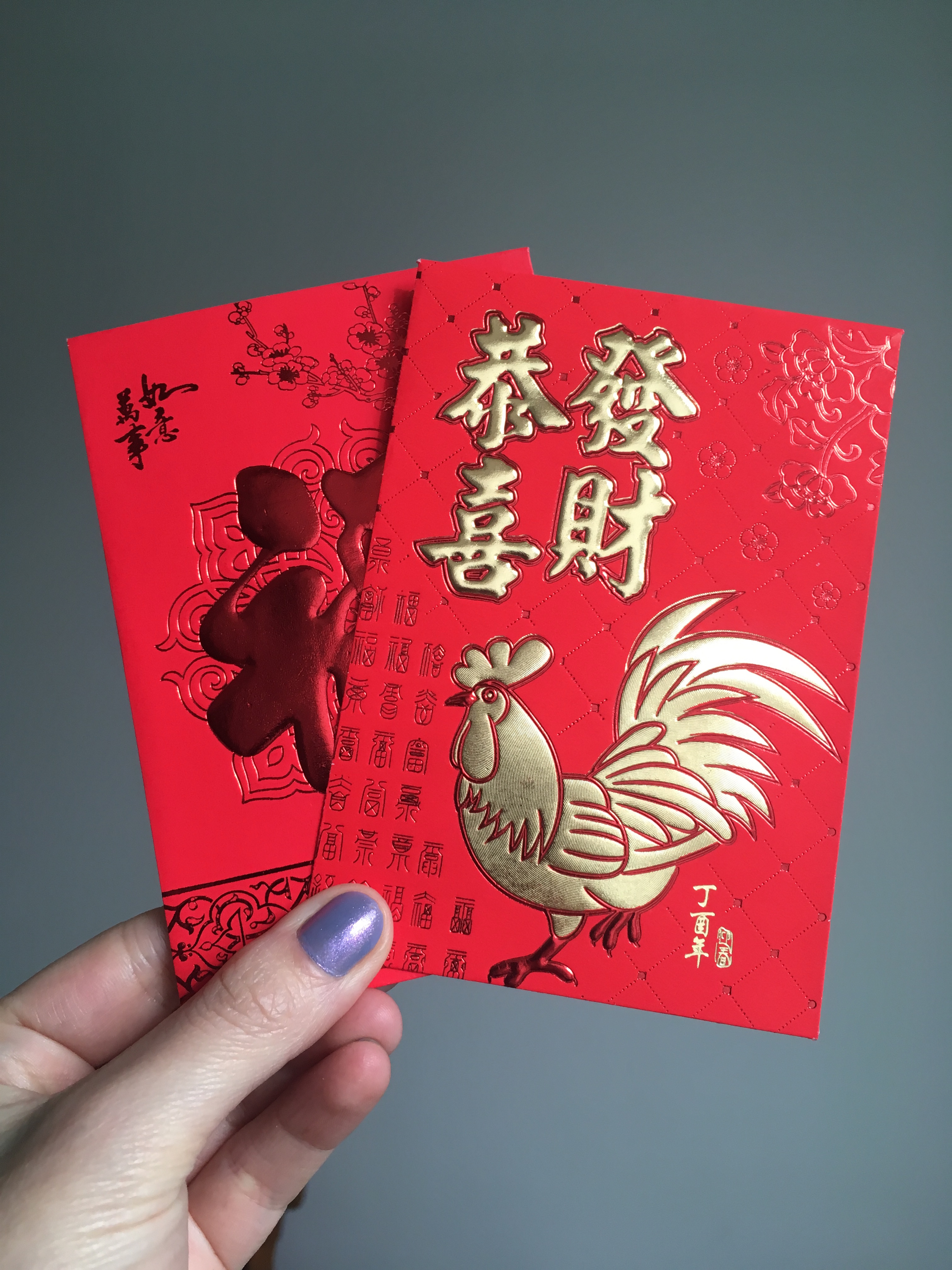 When the Chinese side of my family first moved to America they lived just outside of Boston’s Chinatown, but they eventually settled into homes in North Cambridge and Cambridgeport. Neither of these were Chinese neighborhoods, and as a Cambridge local, I grew up celebrating the Chinese New Year as part of a mixed Italian- and Chinese-American family. The vivid colors, the holiday banquets, and the loud firecracker noises of the Chinese New Year celebrations left a strong impression on me growing up. Since the Chinese New Year is based around the Lunar calendar, I never knew exactly when it would arrive. When it came, my relatives would give out lucky red envelopes filled with cash. They gave me candies I never saw at regular grocery stores, like pineapple and grape flavored Kasugai gummies and flaky almond cookie bars.

In 2014 I turned 24 and it was my Zodiac Year, The Year of the Horse. In response to that, I wanted to create a painting. I didn’t have a clear idea of what it should be, and I had never explored this holiday artistically. On an instinctive level, I worked towards the aesthetic I had seen before in the lucky red envelopes and other decorations. 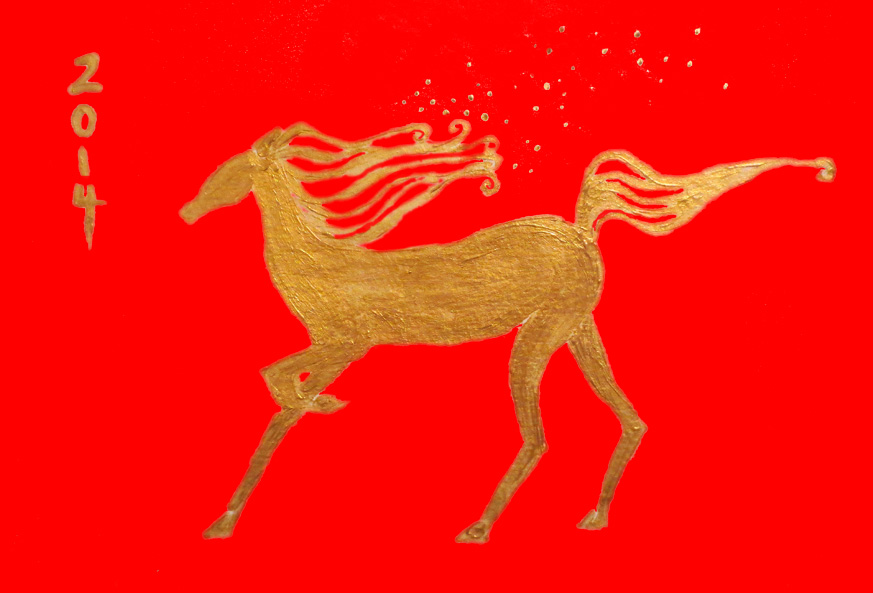 Year of the Horse illustration, 2014.

I was excited by the result of my horse painting, so I made another illustration the following year. In 2015, I incorporated the wood element of the Year of the Goat. The Lunar calendar rotates among twelve animals and five elements, equaling sixty possible combinations — this opened my imagination to what could arrive on the page. I think of goats as typically being white, so I picked a white tree, birch, as the goat’s environment. The knobs on the birch trunks look a bit like goat’s eyes, too. 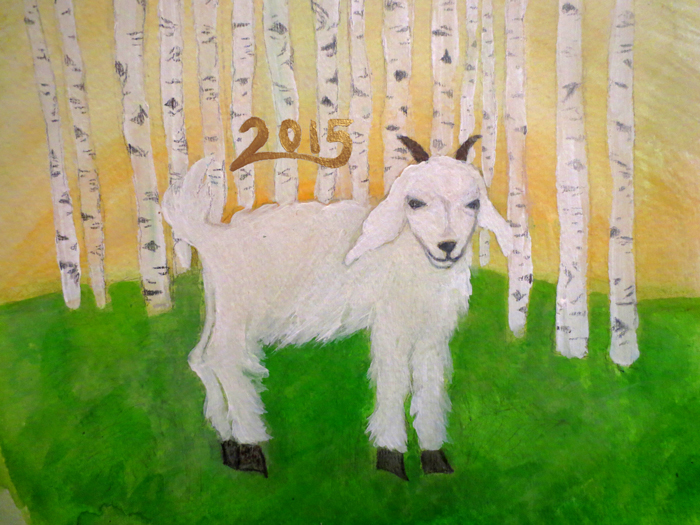 Year of the Wood Goat illustration, 2015.

2015 was a breakthrough year for me for another reason. After e-mailing my goat illustration to several of my relatives, my Dad’s cousin in Maryland wrote back:

you know what would be cool? 25 yrs from now with all your annual chinese new yr illustrations together in a book! keep it up. don’t drop a year!

And with that, I continued with my third piece in 2016, The Year of the Fire Monkey. Since the element for 2016 was fire, my painting referenced the wood element of the previous year by depicting wood burning in a campfire, representing a transformation of the old into the new. I was watching my boyfriend’s cat when I was creating this illustration, and I think this may have affected the monkey design. After I completed the illustration, I noticed that the monkey’s tail and posture looked a bit like a cat’s. 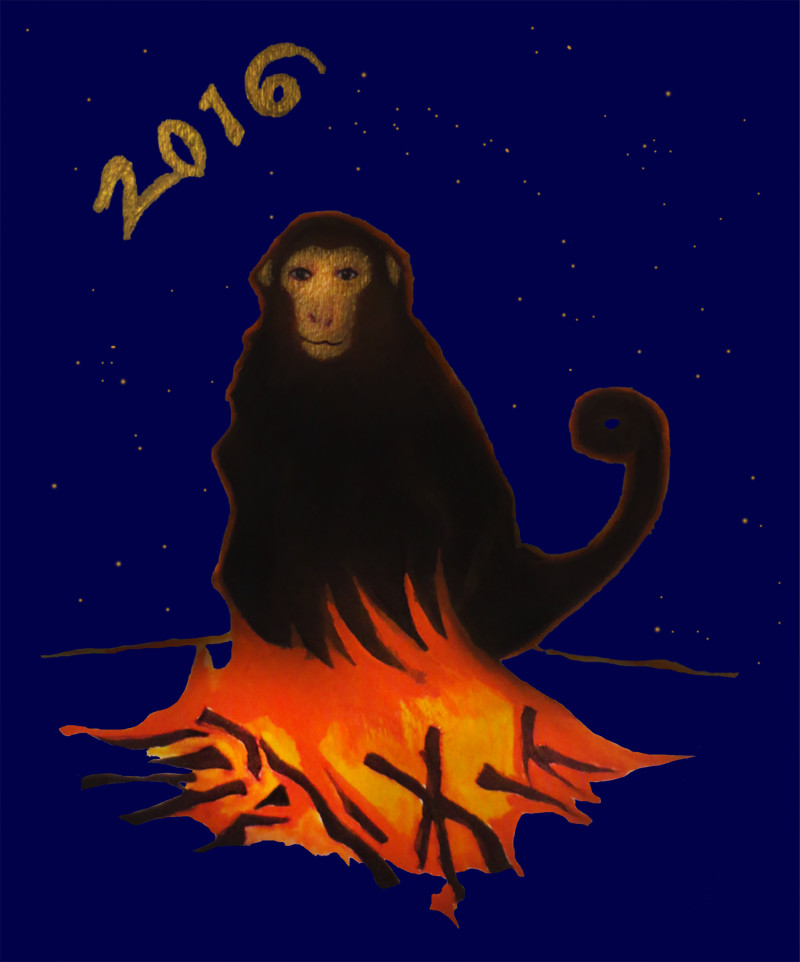 Year of the Fire Monkey illustration, 2016.

This year, my Year of the Fire Rooster artwork included a real place based on a future life event, my cousin’s wedding in Southern California. For my earlier pieces, I relied on Google Images for references along with my imagination and freestyle illustration to paint the birch trees, the bonfire, and the animals. I have visited the Los Angeles area multiple times over the past two years, and I took many sketches of the architecture and landscapes when I was there. Little did I know that those sketches would contribute to a piece of art in 2017! In this year’s illustration, I used yellow as the background sky color to represent morning light from the sun rising behind the rooster. Later, I learned that yellow is the lucky color for the 2017 Year of the Rooster. 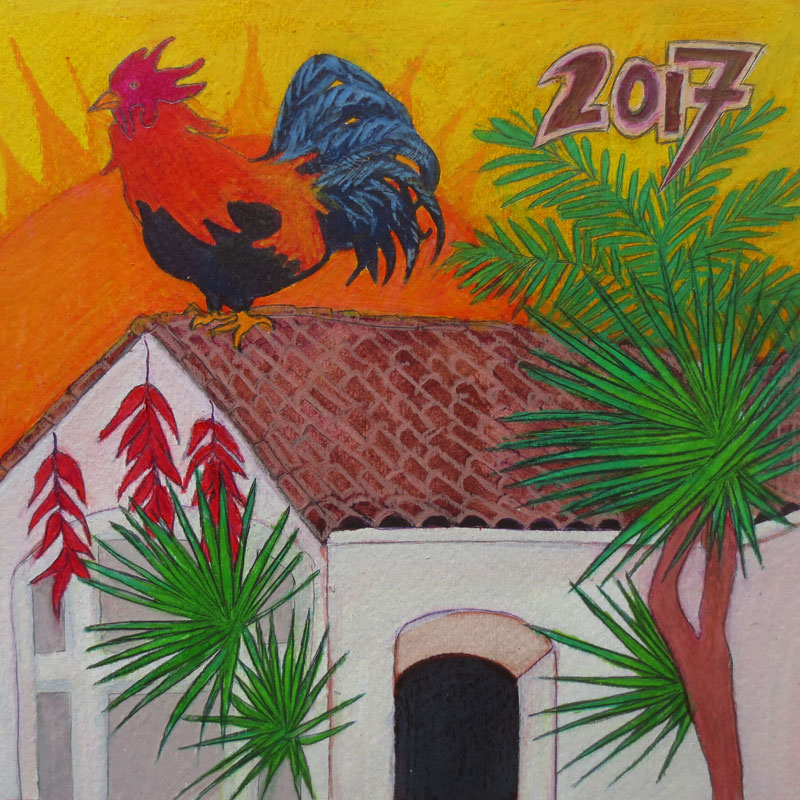 Year of the Fire Rooster illustration, 2017.

Over the years, my painting style has moved away from the traditional red and gold color palette that I used to paint my first illustration in the series. I wonder how my artwork would be different if I were living in China instead of Cambridge. Would I have sketched the architecture and plants from my trips to California? Or would all my scenes be in China? Would I have been less inclined to break away from the traditional red and gold?

Creating art based on the Eastern calendar has had a refreshing effect on my life. Viewing time as a circle rather than a line gives us more time to reflect and less pressure to rush through life. The Eastern interpretation of time believes that our experiences share a deep sense of connectedness. Whenever I encounter an animal from the Zodiac in the future, I will imagine time looping back on itself and I will think about the illustration I created of that animal in my series.

I can only imagine what my next Year of the Rooster illustration will look like. By then, I will be 38 years old! The only thing I can be certain of about that year is that it will be a year of the Earth element. This project has an ideal balance of constraints and freedoms to keep the series going. Each year’s animal and element is a constraint to work with, and the inspiration that comes from the the unpredictability of life is the creative freedom. For example, what could the year of the water pig illustration look like? What about the year of the metal tiger?

I plan to post next year’s illustration of the Year of the Earth Dog on my Chinese New Year project web page on February 16, 2018. This web page includes all of the illustrations in the series from 2014-17, as well as a printable PDF I made of a fold-it-yourself envelope for Year of the Rooster that includes my original artwork.

Liked it? Take a second to support Maryam Yoon on Patreon!