We all know about the nomer Rat City – those of us who live here can’t escape the reality of our neighborhood’s nickname on any given walk home. But maybe the more fitting (and flattering) title for Allston would be Art City. Allston’s identity is largely defined by our thriving arts communities. From our more established institutions, to our underground venues, to the murals that decorate almost every block – Allston has a diverse yet often underreported, underacknowledged art scene. For those of us who wish to further explore the city, this article serves as a starter-guide to a mere percentage of the art our neighborhood offers. Create a Google Maps walking tour connecting all the destinations, or make it a goal to visit one site a week, but whatever you do – make sure you check these out! 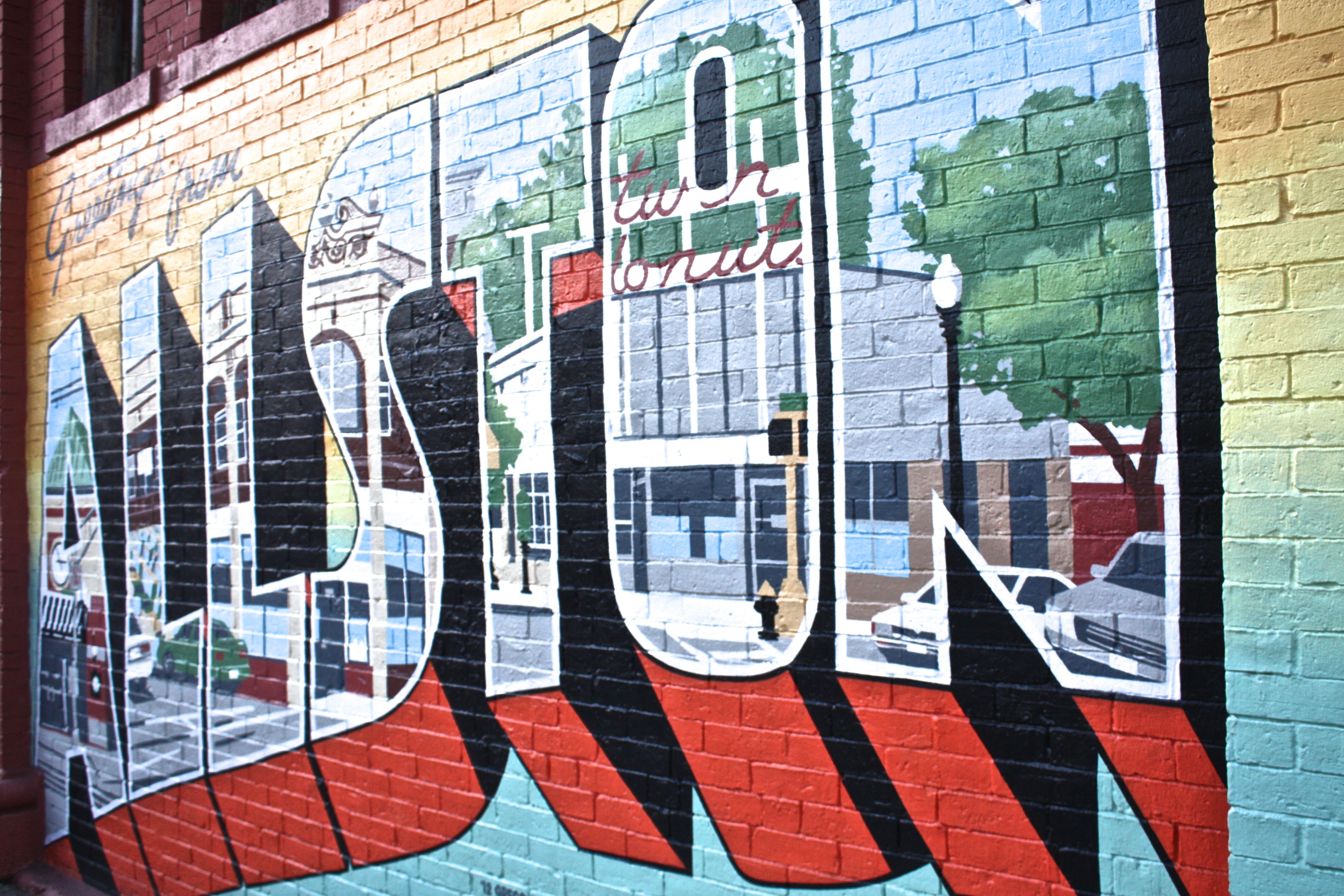 What better place to start than the Greetings from Allston mural on the corner of the Kaju Tofu Korean restaurant? Anyone who’s walked down Harvard Ave after a night out or a trip to McDonalds knows exactly the one I’m talking about. Mimicking a postcard, the mural pays homage to iconic local spots. The abstracted scene recalls recognizable small businesses from downtown – most notably, the ever-famous Twin Donuts. Greetings From Allston was painted by Gregg Bernstein, a muralist whose work can be seen all over Boston. This piece holds a special place in my heart, and after seeing the piece recently grew onto a nearby building, I just had to include it in this article. Having lived on this block for several years, Domino Theory was the backdrop to countless big moments in my life. The same goes for many in Lower Allston – nearly every day, a couple shoots their engagement photos in front of the dotted wall. What the dots depict, however, is somewhat up for debate.

Neelon paints two of his signature puff-ball characters breaking down walls, which I read as revolutionaries taking to the streets and making the change they want to see in the world. This piece hits hard for those of us Allston residents who are witnessing changes in our rapidly-gentrifying neighborhood. Domino Theory poses the question: Who gets to determine the architecture of Allston?

But on a lighter, more topical note, the piece looks a bit like a caterpillar which always made me chuckle. I’ve taken a poll, asking each person I walk by this piece with what they think Neelon painted, and the results are 50/50 caterpillar vs puff ball. Go check it out and see what you think. Neelon’s work can also be found on the side of [email protected] Thai Restaurant in Allston at 443 Cambridge Street. 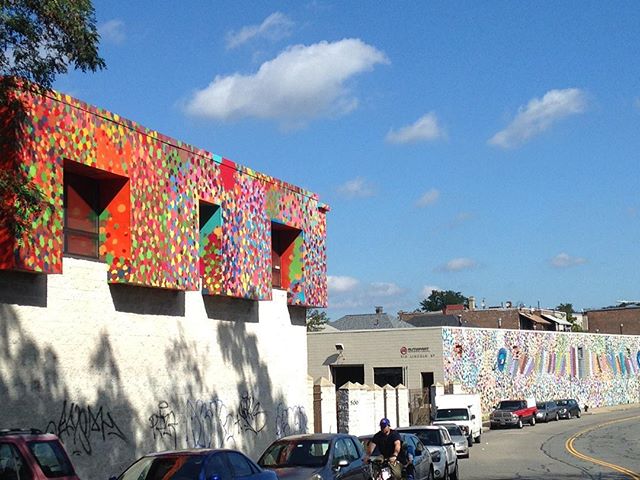 Domino Theory’s new addition next to the old mural 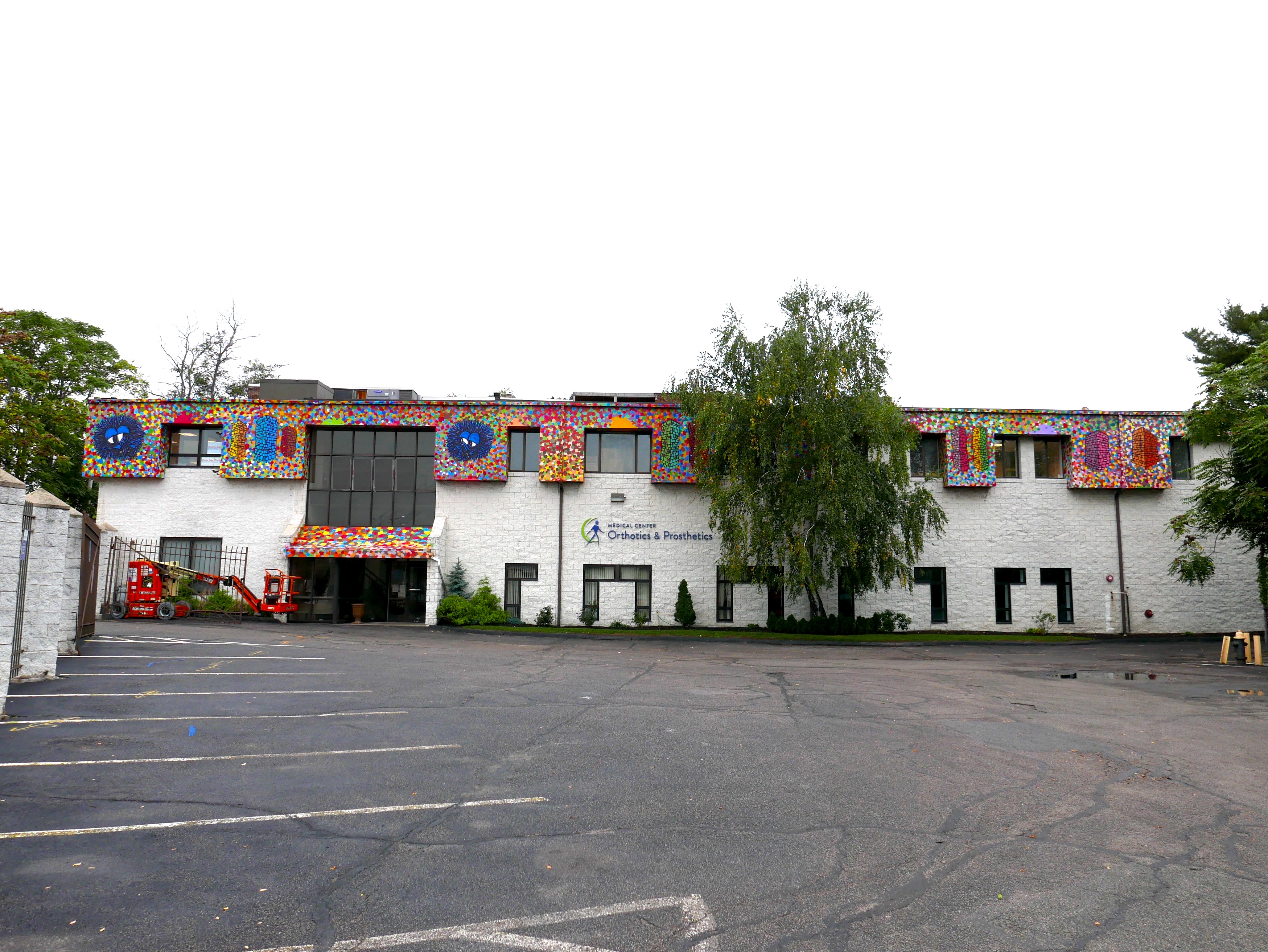 Chris DeLorenzo, All That Empty Space, 2018, Photographed by Zone 3

Chris DeLorenzo, All That Empty Space

All That Empty Space is the most recent piece from Zone 3’s Walls on Western mural program. Walls on Western is focused on highlighting Boston-area artists through a series of open calls for murals at locations around Zone 3’s hub of activity at 267 Western Ave. So far, three murals have been painted, and Zone 3 hopes to open up another call for artists in 2019. All That Empty Space is painted on one of the exterior walls of the PRX Podcast Garage, which is located at Zone 3.

Chris DeLorenzo, who lived in Allston after college, took inspiration for his mural from Allston’s residents. Two individuals, bound together by their creative mindset, stand side by side daydreaming. DeLorenzo hopes we can all see ourselves reflected in the simplicity of this image. The bright, sun yellow of the background reminds me of the best Allston has to offer: the Sunburst Honey Locust trees that line Western Ave, the sunlight shining as you walk downtown, and the vibrancy of a friend’s laughter over beers. Of all the murals in Allston, this is arguably my favorite. Cosmo’s mural, the first mural painted as part of Zone 3’s Walls on Western program,  captures the neighborhood like no other, even down to the wiggly lines of characters’ smiles and squinting eyes. Each figure in Faces of Allston has a relationship to the neighborhood. From the back of the scene pops out Arthur, which might seem unexpected to some, but residents know the WGBH studio reps a 02135 zip. Smirking in the bottom corner is a Boston Terrier who looks like he’s graduated BU, moved to Allston, and started drinking PBR. Washington Allston, Harvard-graduated poet and the origin of our neighborhood’s name, makes an appearance himself. And the faces we might not recognize at first sight are actually the most relatable – they represent us. These are the characters you might see around town, from red sox fans to punk kids to preppy girls. Which are you? Imagine, Saya Patri (One with a hundred petals) 2017 Imagine, Saya Patri (One with a hundred petals)

Imagine, aka Sneha Shrestha, was the second Walls on Western artist to create their mural in Allston. Imagine is a Nepali artist whose imagery is inspired by her Hindu-Buddhist upbringing. Her designs pull from her native language, Sanskrit scripture, and graffiti. Saya Patri, executed in fluorescent violet and red hues, acts as a colorful backdrop to Western Ave and signifies this block is a growing hub of the arts. This mural is one of the newest in Allston, finished by self-trained Massachusetts artist Hiero Veiga at the end of September. To me, Veiga’s figure is comparable to Cosmos’s Faces of Allston, albeit executed in a different style. The man’s feet, exaggerated in size, strangely say something about the locale here – stylishly business casual during the day yet simultaneously kicked back, carefree, and borderline grungy. And what better place for the mural than Vivant Vintage, the store every Allstonite finds their vintage ephemera at, from leather jackets to old playboys? This man looks like he could have stumbled out of the store for a quick nap, the sense of calm reflected on his face, if it weren’t for the rope binding him in place. Is the man stuck? Is he at rest? Head down to Vivant to investigate this new addition to the neighborhood.

A new live-streaming video variety show employing the arts and improvisation to envision and enact a just future.