Through the Art in Print program along Western Ave  Allston/Brighton, you can now get your own limited edition print by 10 local artists for only 25 cents each! Art in Print is a new public art program of Zone 3, the Harvard-sparked initiative that has recently brought new murals to Allston and a range of events to its hub of activity at 267 Western Ave. Art in Print is bringing an affordable means of buying art to the neighborhood by repurposing old newspaper bins and replacing the papers inside with posters. Four bins, painted in a recognizable fluorescent blue, have been placed down Western Ave. Each contains the works of 2-3 different artists, all with a personal relationship to Boston or to Massachusetts. You can hit all four bins in a day through this proposed walking tour, or you could read up beforehand and figure out which bins your favorite artists are taking over! 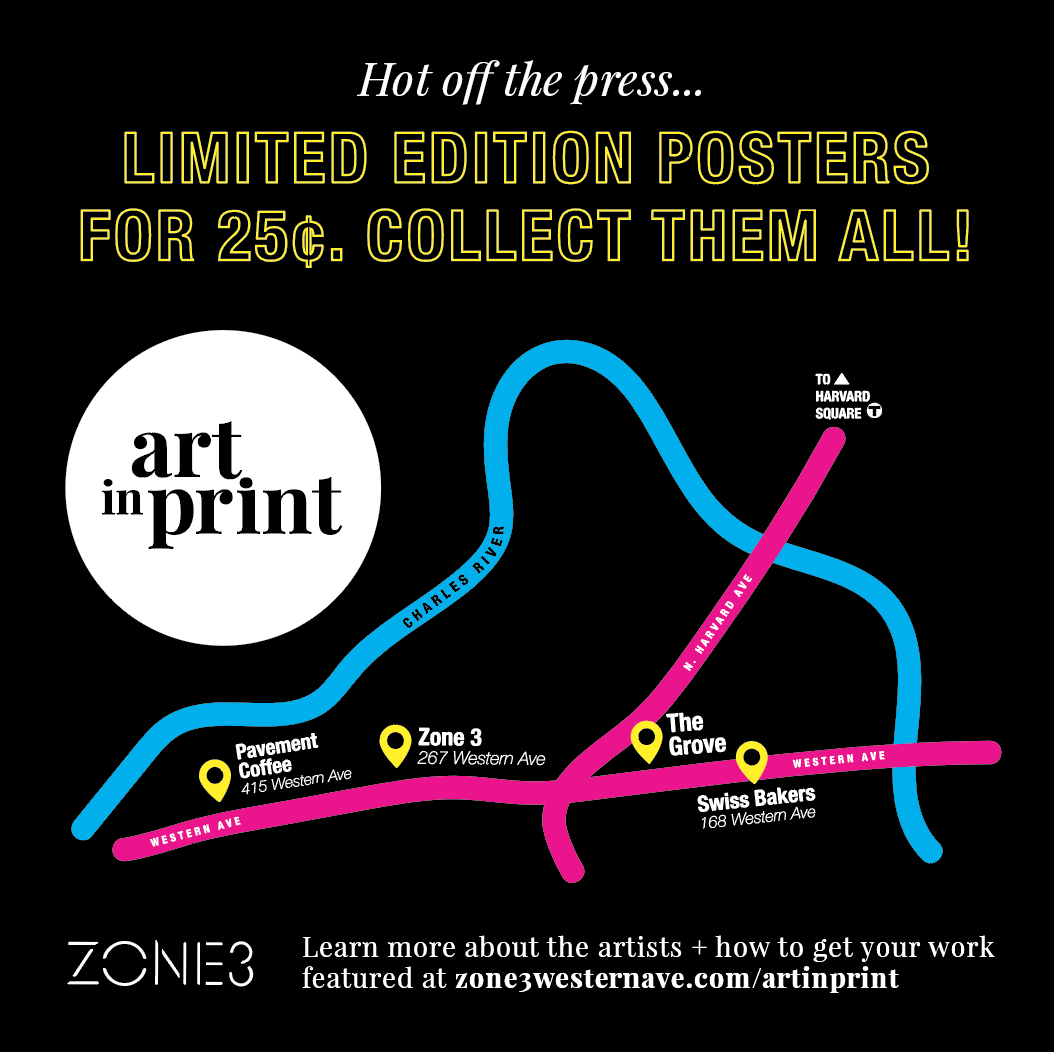 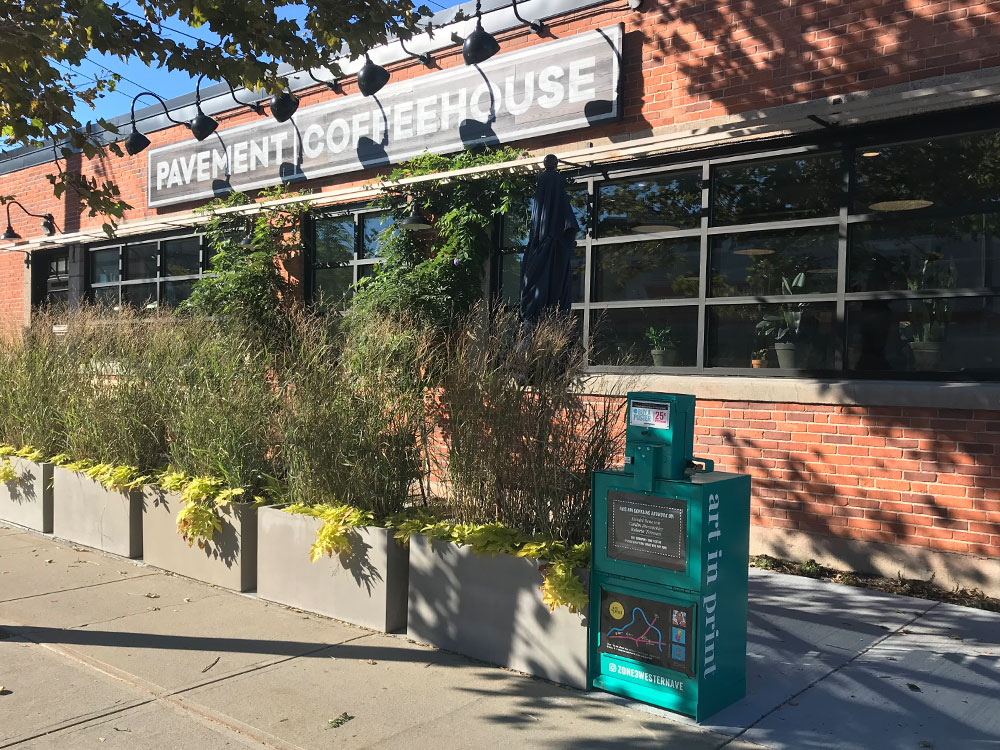 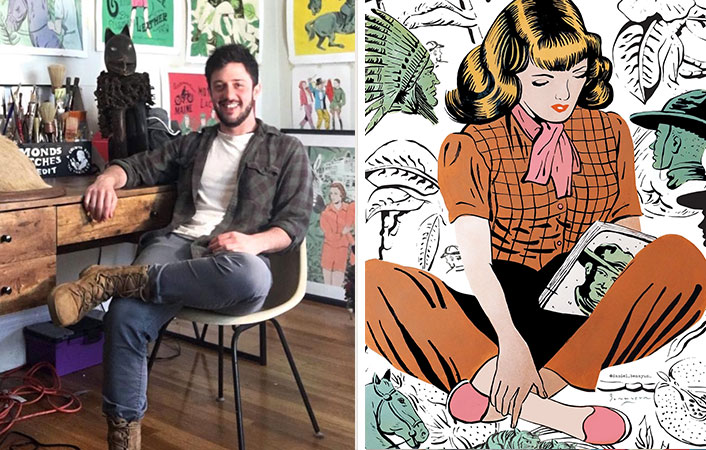 Inspired by mid-twentieth century advertising, Ben-Ayun’s illustrations appropriate imagery and style from retro commercial designs remarketed towards a 21st century audience. Tootsie West channels the idealism of the 1950’s, from its pastel color palette to the model’s classical hairstyle, but takes an anti-capitalist twist: Instead of using these visual cues to convince women they need a new fridge or vacuum, Ben-Ayun’s Tootsie West encourages women instead to read, meditate, and immerse themselves deep in a story. 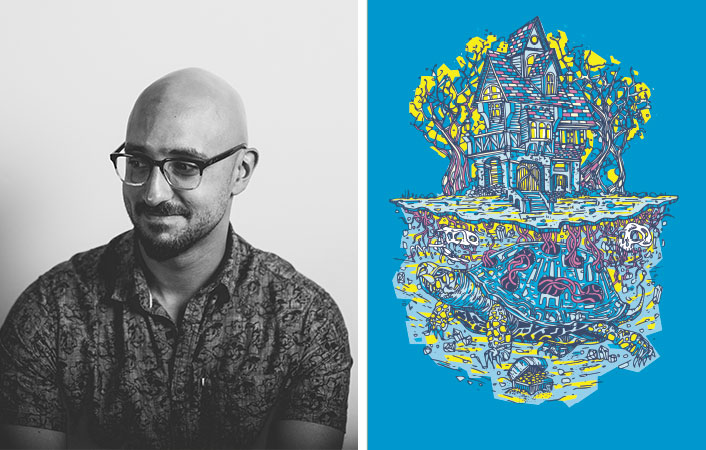 Roberto Terrones, a Boston-born artist who works across mediums in illustration, painting, photography, and film, contributed his work Turtle Power to the newspaper bin found at Pavement Coffee. Turtle Power is a near-psychedelic, other-worldly image of a house run entirely by turtle power. Tubular veins grow out of the turtle’s spots and connect to the house’s foundation. The work recalls the idea that everything grows from nature, yet the tone of the piece borders apocalyptic. The decrepit house feels like a stand-in for our world in the wake of the newest climate report: dependent on the consumption of living things but doomed as soon as those natural resources run out. 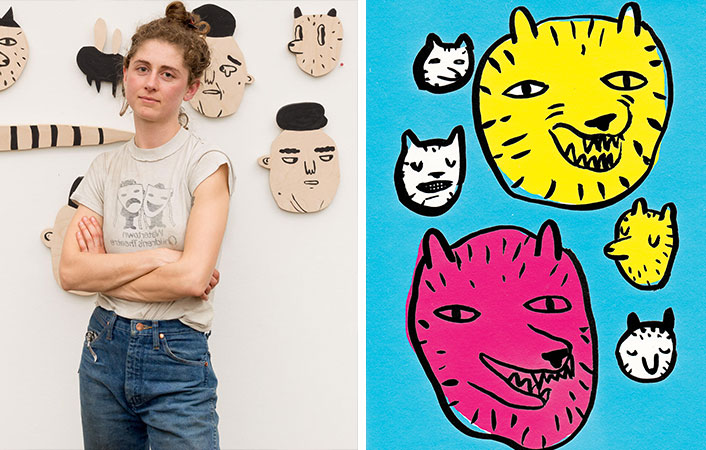 Caitlin Duennebier, EVEN THE BUGS AND ANIMALS ARE SAD

Caitlin Duennebier, EVEN THE BUGS AND ANIMALS ARE SAD

EVEN THE BUGS AND ANIMALS ARE SAD is part of a larger series called LEARNING HOW TO CRY WHILE DRIVING UP GHOST MOUNTAIN, based on a fictional narrative of a woman driving as spirits converse with eachother. The series serves as a meditation on dealing with loss, with illustrations alternating between monotonous shades of grey and bright pops of vibrant color. EVEN THE BUGS AND ANIMALS ARE SAD, despite its serious topic, is a fun print- with smiling neon animals set against jewel toned aquamarine. 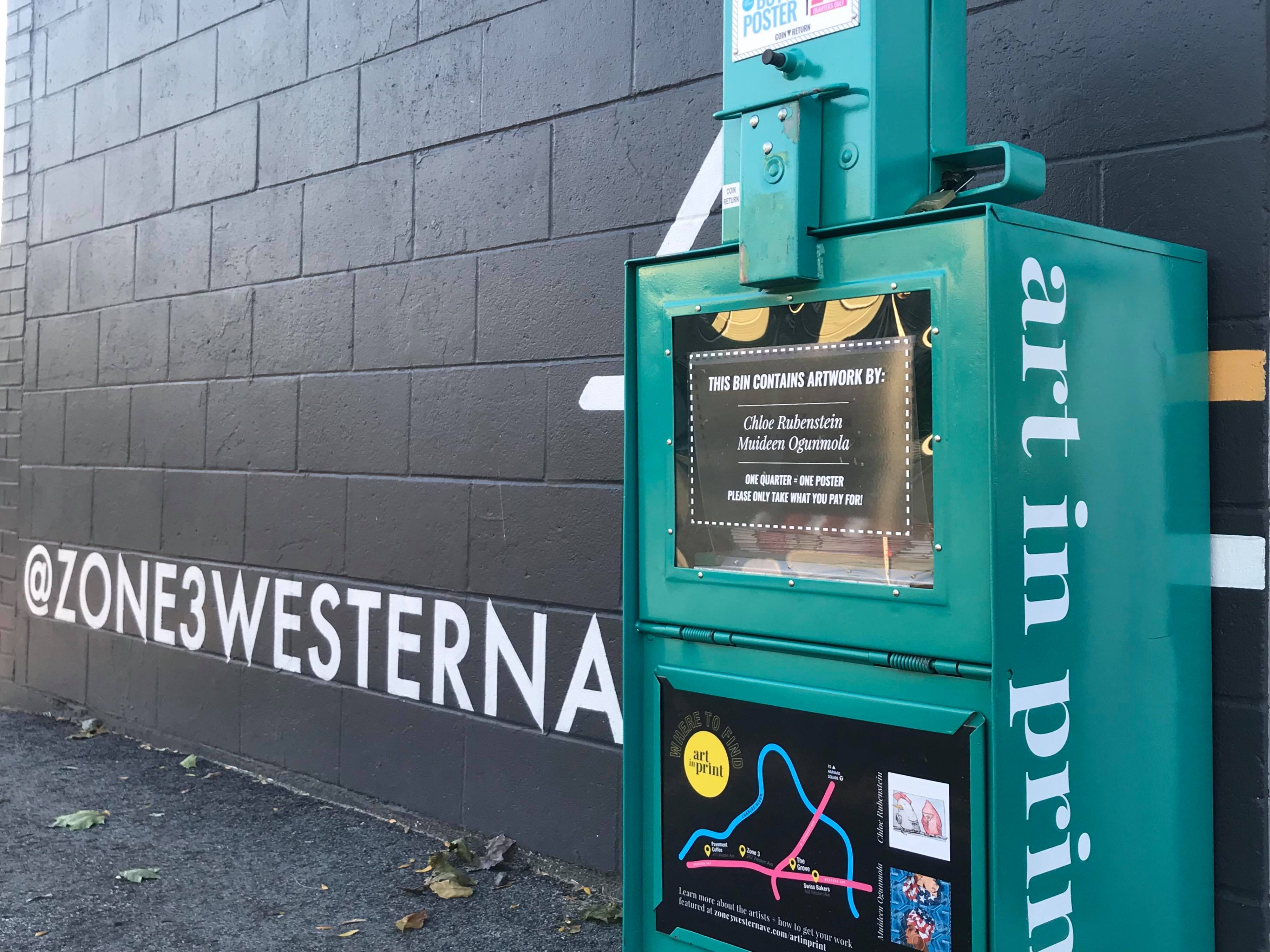 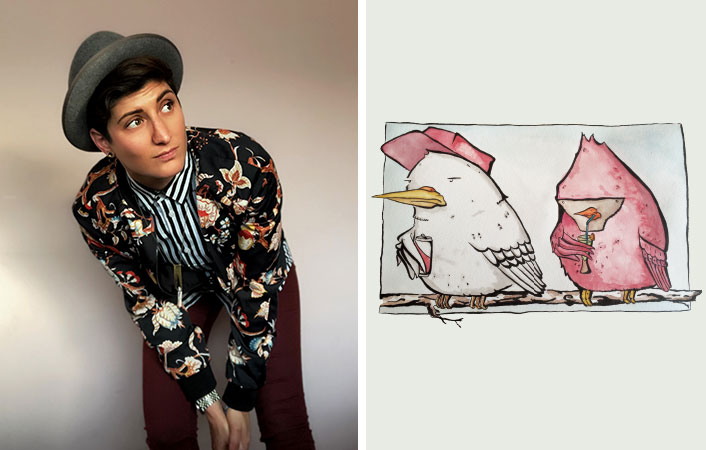 Chloe Rubenstein, Birds on a Wire

Chloe Rubenstein, Birds on a Wire

Queer, Boston/Somerville-based artist Chloe Rubenstein created the funniest, most fitting poster to be sold in front of Zone 3. Zone 3, home to Aeronaut Brewery, a podcast garage, and an art gallery is quintessentially Allston, a place for all hip Allstonites to gather. Rubenstein’s birds fit right in here. As they sip their drinks, the birds peer at us through near-closed eyes barely visible under hats and sweatshirt hoods. Rubenstein, who likes to make satirical art and punny doodles, unknowingly captured the locale here with humorous accuracy. Birds on a Wire is a must-grab the next time you’re in the area for a beer or an art event. 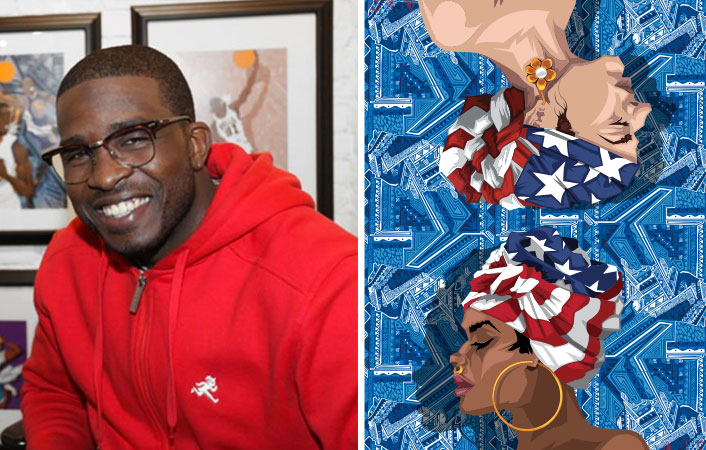 Muideen Ogunmola, aka BLOCKNATION, is a Detroit-born illustrator and designer working out of Boston. Two Sides is a work that promotes the unity and mutual support of two women lifting eachother up. “This piece is a representation of the idea of race and women’s rights and that the fight for one side is in turn a fight for both sides.” Two Sides is a reminder that one can’t fight only for their own interest, rather, they must stand up for and with their marginalized sisters. The side-by-side portraits elicit comparison between the two women and highlight their differences, but if you look at their shadows, they are the same.

THE GROVE: Greenspace at the corner of N. Harvard St and Western Ave 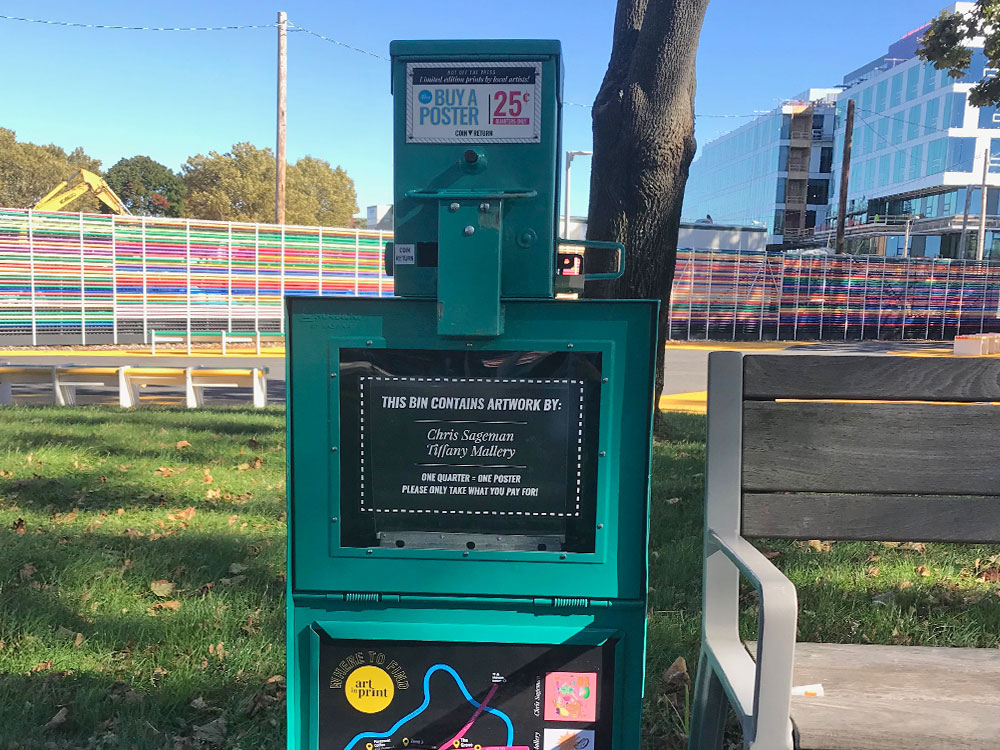 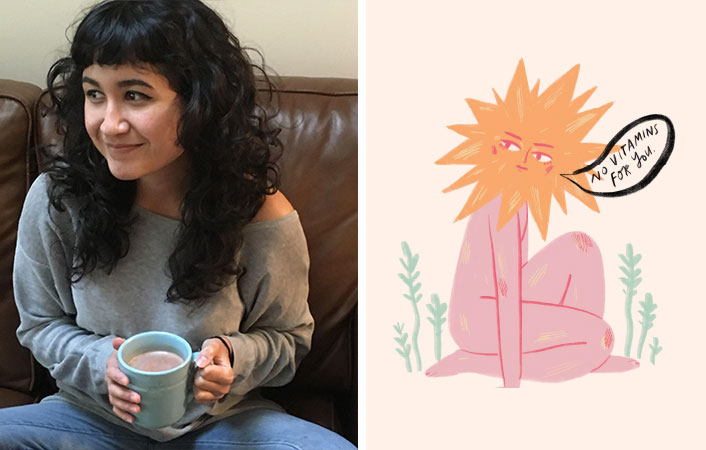 Goodbye Vitamin D is a memorial to summer sun, changing seasons, and the color pink. Tiffany Mallery’s uplifting style is bound to elicit a smile from any viewer. Her playful image depicts a sun personified as a woman, just hanging out, doing her thing, chillin in nature. Plants grow around her, as if she nurtures all she touches with her mere presence. Mallery’s Goodbye Vitamin D nods to the hibernation of all life that comes with winter in New England, or as she puts it, the time of year to get out your sun lamps and start taking your Vitamin D supplements. The simplicity and joy that radiates from Goodbye Vitamin D is (almost) enough to keep you warm all winter. 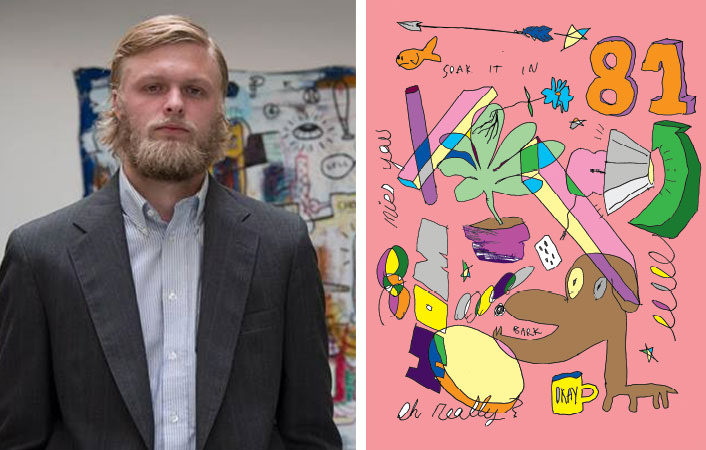 Sageman’s work feels like a new-age game of I Spy. In The Kitchen Sink (as in, everything but?), one can find anything from potted plants to cups of coffee to lampshades. The objects overlap and fuse forms, adding a feeling of confusion to the composition by forcing viewers to  closely investigate where each shape ends and the next begins. Sageman describes the underlying patterns in his chaotic compositions as, “ the confusion and serendipity people experience within there everyday routines and habits.” 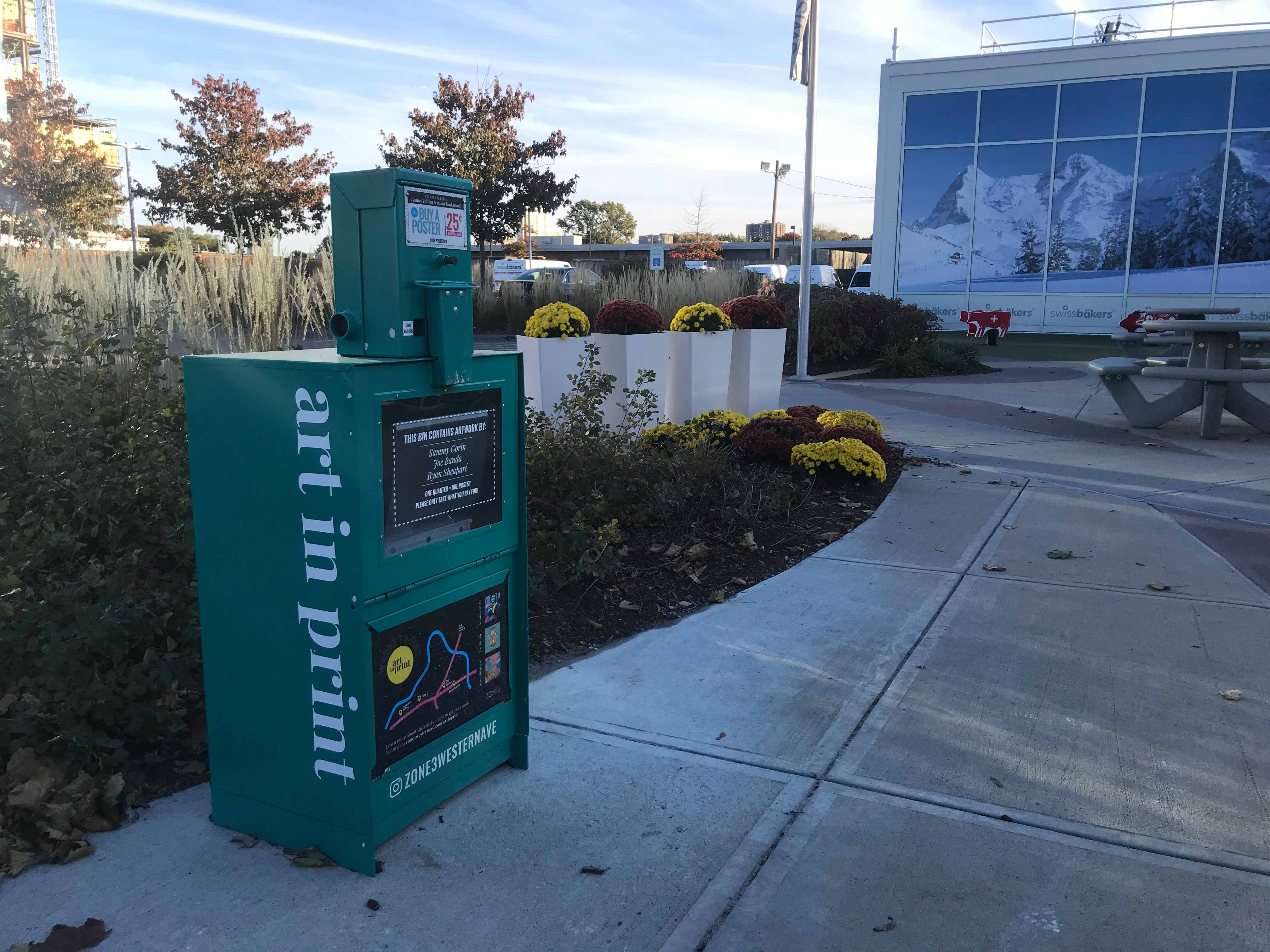 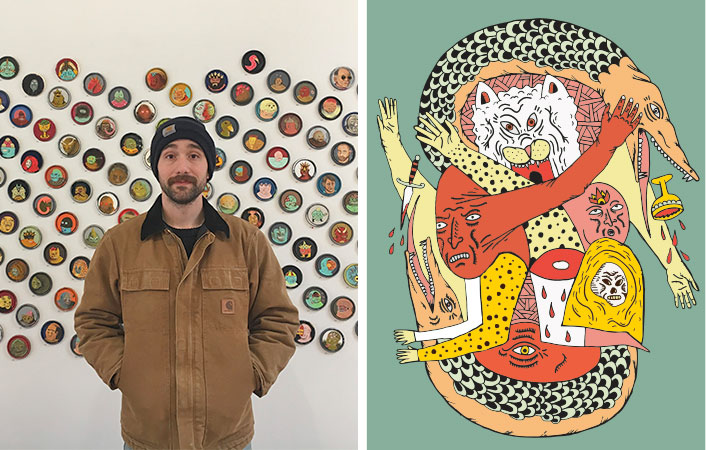 Banda is an artist who’s constantly working in attempts to keep busy, and his efforts are clear from his intricately detailed illustration, Serpents of Wisdom. Banda’s surrealist vision, which actually began as a stream of consciousness drawing, consists of twisted bodies of animalistic characters. Among these are (or seem to be?) snakes, cats, ugly demon men, and a figure that looks suspiciously like the grim reaper. Arms reach out in every direction, as if individuals in this mass are trying to climb out of and on top of the rest. But they’ll never get there – as each tries to claw their way to the top, more chaos is created. Curiously, the title points to the infinite sageness of these characters, yet they are surrounded by dangerous vices, as they literally consume blood covered knives and full goblets of wine. 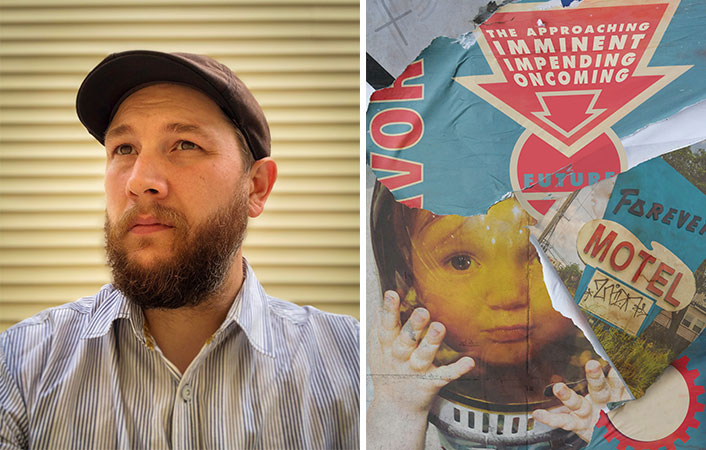 Sheapré has described his design process as if he was working through a puzzle. Untitled: Future reflects a working-through of this collaging process as well as a working-through of the artist’s inner turmoils. Untitled: Future is a photographic collage, stitching together uncanny images of a young bewildered child and advertisements which recall obsessive thinking. The child’s innocence is contrasted by these intrusive thoughts: THE APPROACHING, IMMINENT, IMPENDING, ONCOMING FUTURE. One can only imagine the child is a stand-in for the artist’s own worries, represented through the naivete of youth unaware of all that will be impressed upon them in their many years ahead. And on a lighter note, the work makes a great poster! 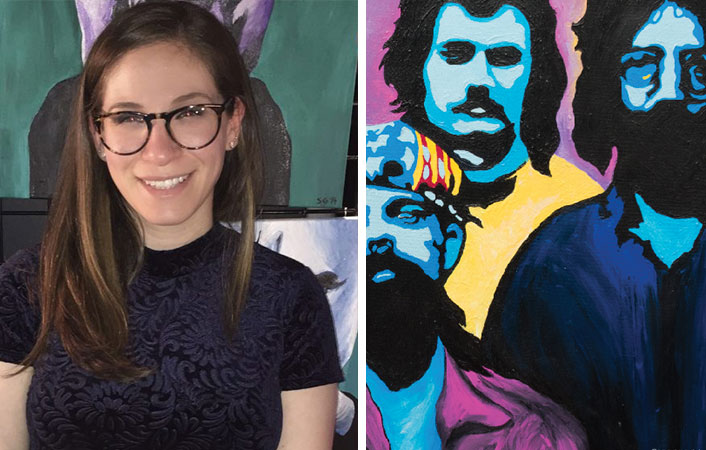 Sammy Gorin, Grateful for the Dead

Sammy Gorin, Grateful for the Dead

Sammy Gorin, who lives in Allston herself, is a multimedia artist working across portraiture, paint pouring, and marker illustrations. Her work, Grateful for the Dead, is an homage to the namesake band. The posterized portrait honors the artist’s favorite musicians, combining her passions of art and music. Gorin paints the band in moody purples and funky, bright yellows, translating the experience of listening to music through this illustration. Furthermore, Gorin nods to the tradition of creating and collecting posters for bands. Instead of paying hundreds of dollars for a collectors item band poster, Gorin’s illustration captures classical elements of album art for only 25 cents.

For more info check out: http://www.zone3westernave.com/artinprint/