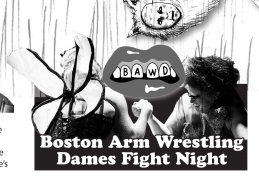 Alright, alright, alright. There’s been a lot of ruckus since B.A.W.D.* last rocked your asses. So, as we all know, for the better or the worse, all hell has broken loose on the planet.  A battle between light and dark. Of ascension or descent. Some may even say TL:DR “The Apocalypse.”

That is our champion, yep she won last season’s tournament.

Anyway, we decided that *shrug* what’s the harm of doing it all again. It can’t get any worse, amiright? So, come join us at the Oberon on May 19th – doors open at 7pm, the mayhem starts at 7:30pm.

This is a night of lady on lady arm wrestlin’ action with all kinds of chaos and beer and raffle prizes ensuing. ALL proceeds go to support Boston Abortion Support Collective, and that should warm you in all the right bits.

*Boston Arm Wrestling Dames. Yeah, I know I should have led with that, but I wanted you to work for it. We’re a group of dames who combine theater, philanthropy, and hardcore athleticism.