Andy Houldcroft is a part-time complainer, full-time worrywart, and a regular contributor to the Boston Hassle Film Flam section. They’re trying to figure out life while offering “alternative” takes on cinema which usually end with winky faces and sunglass emojis.

With this being the end of the year and with the current writer’s block I’m having in thinking about a respectable Year Ender piece for Boston Hassle, I figured I’d talk about that which our other writers have ignored – a crucial aspect of the moviegoing experience which, for some, might make or break the perfect screening.

I’d be remiss not to mention that our site has offered some great op-eds and film-centric think pieces throughout the past year with an emphasis on pushing film critique to new heights. But, seriously, where else are you going to get this kind of examination and who else would be fallible enough to take the fall for a bathroom-centric piece?

So, without further ado, let’s start this journey and do the best we can to make accurate and appropriate observations on just who’s who in the theater-based Boston Bathroom Business.

(Then again, I feel inclined to preface this by making the obvious mention that all bathrooms are created equal. Every porcelain throne has the same basic function when it comes to their utility. I’ll admit, everyone who made the cut for this list at least has functionality in their facilities. As such, my opinions should be taken as more farce than fact and you, dear reader, should judge every word and thought with a grain of bath-salt.)

I feel dirty reserving a spot up front for the big wigs in this game. Oh, don’t play dumb, you know exactly who I’m talking about here: AMC, Regal, and other chain mega-cinemas whose purpose is to offer various blockbusters over satisfying bowel-burstings.

We get it. The bathroom experience just isn’t a top priority when it comes to putting asses in the seats. But did you ever stop to take a moment and think about what those asses might want to do between showtimes or in an emergency during a dreadful screening of Nine Lives (2016), starring Kevin Spacey and Christopher Walken?

Did you ever consider someone’s feelings when they’ve ingested too much cherry-flavored Mr. Pibb to drink away the pain of having to sit through 90 minutes of a film about a dad who becomes a cat, Shaggy Dog style?

No. These bathrooms are meant only for their use-value and are certainly not trying to win any awards for style, class, or creativity. For that reason, it’d be an insult to eat this valuable list up by naming the accused in full detail.

I am not one to cast a scarlet letter upon any single theater, but I will say that you fellas need to up your game and really focus your attention on a space in dire need of love and care. 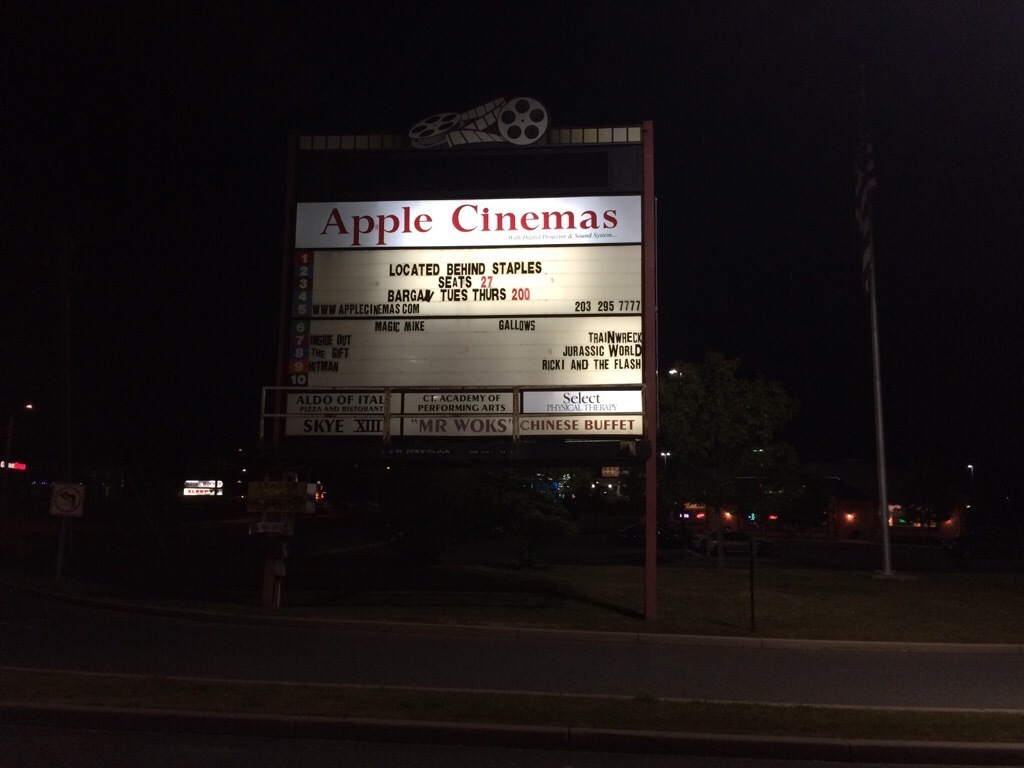 I remember when I originally heard of this place by its deceptive moniker. I thought, Wow, I didn’t know Apple had their own line of cinemas, thinking I’d drive up to the pearly white walls of an aesthetic masterpiece, complete with comfy screening rooms and high-resolution projectors that would blow my mind.

I guess if you’ve ever been here you understand that this is a drastic re-imagining of what you’re actually getting from a place like this.

Now don’t get me wrong – between the local charm of a greasy multiplex and the spacious non-stadium-seated theaters, there’s something classic to a place that feels so reminiscent of suburban movie houses. Likewise, there’s a charm to having to go the bathroom in a room devoid of anything remarkable. It feels wrong, but the tight space and the half-cleaned floors would surely have you remembering the place your dad might have taken you when he had you for the weekend or needed to keep you busy for a couple hours.

In that sense, you get exactly what you come for: a place to do your business and get the heck out. This isn’t the kind of place you’ll want to unwind or spend any vacation time in. 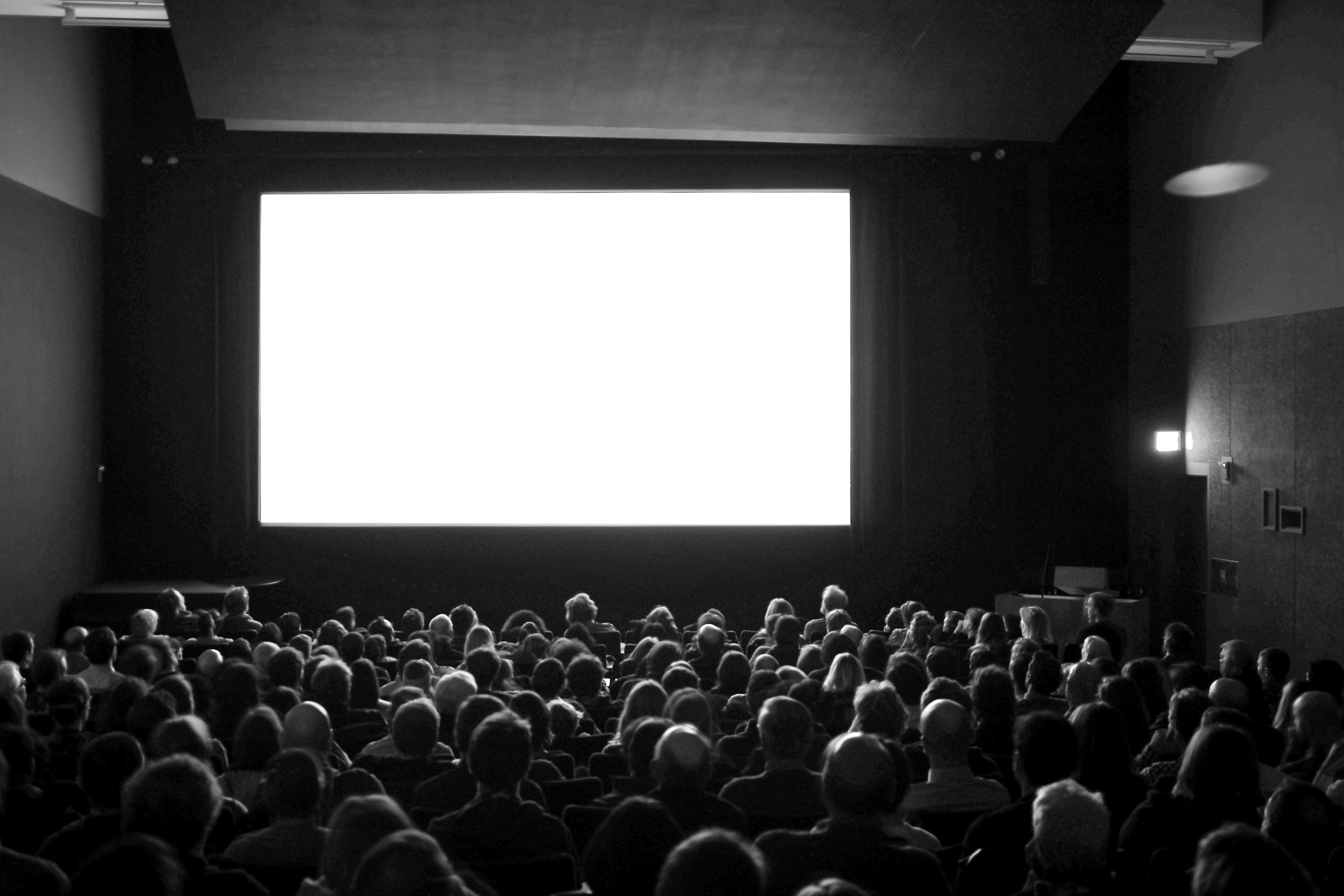 Is this wrong? I’m really only including this bathroom because of what I’ve heard from a peer, and not from personal experience. This isn’t to say that I’ve never had any interest in using the HFA’s facilities; I just haven’t needed to go, you know?

But I have it on fairly-confident authority that this place has a great crapper for its guests tucked away in the back of the theater space. Plus, if you think about how many times the HFA offers free or fun events for the public, you’d probably be pretty pleased using their space regardless of what it offers.

So we’re putting this here because, hey, I’m not one to judge a place that’s given me nothing but great experiences. My peer would also be pretty disappointed if the HFA didn’t get some face time on here.

That being said, I am not interested in using FaceTime™ in any HFA-related bathroom. Likewise, I still feel a little dirty including someone on here based on speculation and, as such, I’ll gladly offer a redaction in the case that someone protests the HFA’s place on a list of formidable competitors. 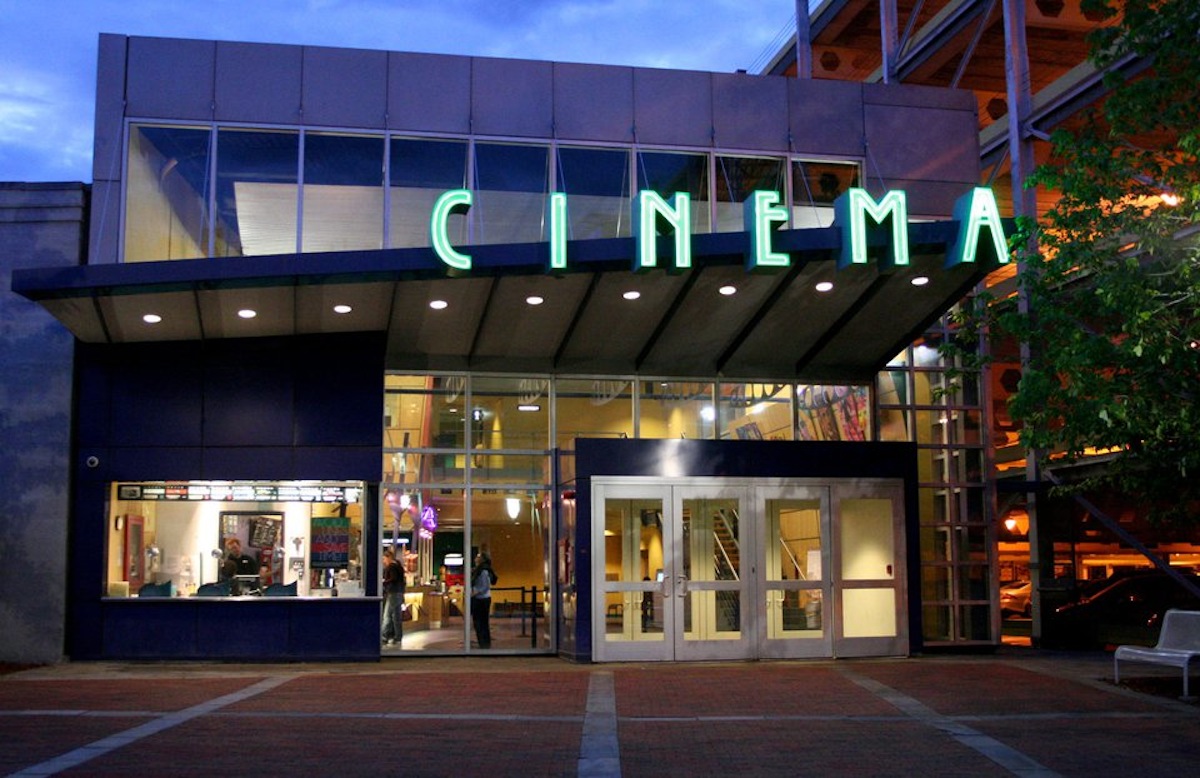 Okay, I can’t really explain this one. In theory, there really isn’t anything remarkable about Kendall’s bathrooms.

I mean, sure, their space is really great from its lobby to its theaters, and you can’t beat the offer of avoiding one of the bigwig cinemas to catch a blockbuster or even a limited release at this respectably cool movie house. But the bathroom? I’m not sure if I even remember what the bathroom looks like, let alone if I had a good time in there.

So, again, I’m writing this half on speculation that the facility is at least usable by the general public, and I admit I’m mixing in a little of my personal bias by letting my respect for the theater influence my decision.

Does this make me a poor authority on the subject? Whatever your answer is, I have little interest in listening to someone who is even half-heartedly interested in the subject of bathroom-rating credibility.

I don’t know who you are but you are not one to judge me.

Anyways… Yeah, this place is pretty great. I get that the bathroom doesn’t stand on its own, but the building’s really cool, and I do remember having to trek through a long hall and over the stairs to even find the facilities. That labyrinthian experience alone makes this a unique place for doing business and is undeniably worthy of a listing on this annual review. 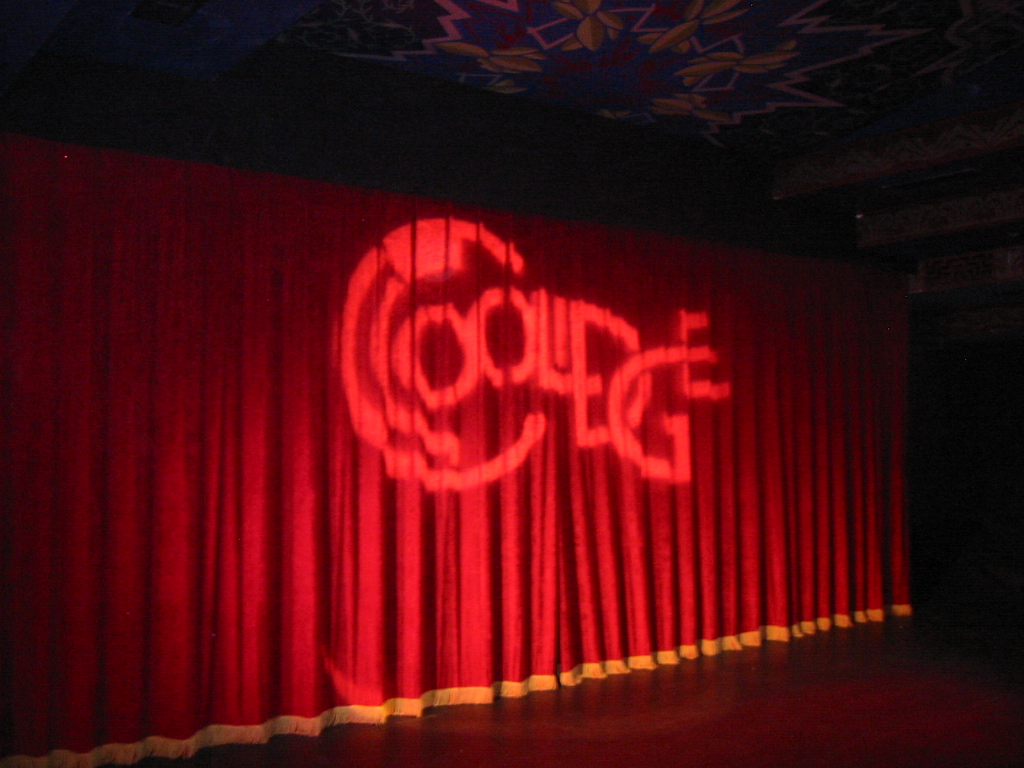 Whether you’re using the upstairs or downstairs fortifications, the Coolidge Corner bathrooms leave a great taste after using them. But if you’re wondering what they taste like, I cannot provide any personal experience. I don’t think I’ve ever been drunk enough to even attempt something like a taste test in here.

From passing by film posters to checking out the decor in their downstairs bathroom – I seem to recall there being various movie posters, and I believe at one point I spotted an old projector – this pee and poo station is comfy, clean, and creative. Plus there’s an inexplicable sense of care given to this space, in that it feels attended to and definitely contributes to the overall experience of Coolidge Corner. My final take on this is that, if you haven’t had the liberty to use this space, I need you to get in there right now.

It’s almost criminal to place Coolidge outside of a #1 ranking, but, after much deliberation, I have to give the honor to another art house that is equally concerned with creating a unique space for your waste. That’s why I have to give the top spot to… 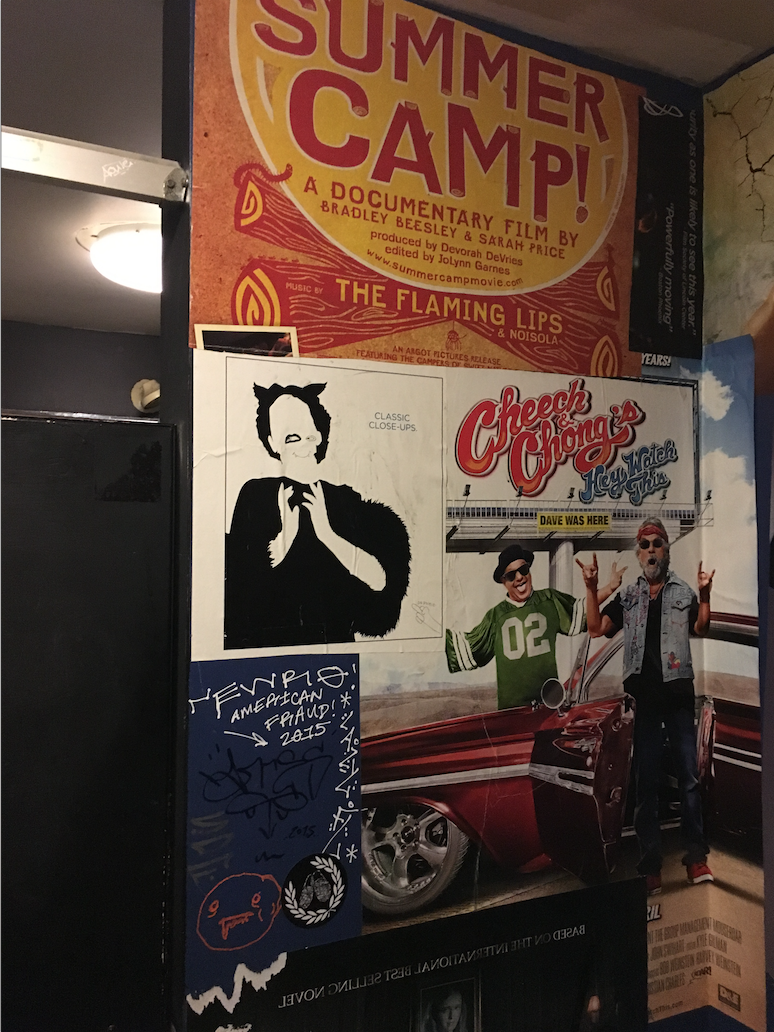 The Brattle makes the number one listing for a reason.

That reason? It’s a really cool place to get your poo on and, in general, it feels more thought out than any of the competitors’ spaces. I mean, check out that sweet design with posters and wall art and the occasional friendly face who’s trapped in a drunken stupor during Trash Night. You won’t get that kind of experience anywhere else.

This place has a sense of charm and finesse that anyone can pick up on. For example, according to a 2011 Yelp Review, Lisa S. writes, “When I had to go to the bathroom in the middle of the movie, it was a bit awkward, because the bathroom is near the front of the theater and the floor creaks, so it felt like everyone in the theater was staring at me. But that’s what makes it ‘quaint’.”

Sure, Lisa, that is what makes it quaint. But it’s also what makes it so special and unique. Where else are you going to forgo the typical lobby to toilet route? Also, where else are going to be able to make a quick dash out the emergency exit after embarrassingly clogging the toilet with the dinner you just enjoyed at one of Harvard Square’s restaurants?

Plus, where else are you going to find wall art of a poorly sketched Shrek? It’s questions like this that make the Brattle’s bathroom feel outside of the waste experience.

This isn’t a bathroom, people –  it’s a waystation to community, a portal to creativity hidden from bitter streets, and finally, a space where moviegoers can get away from it all. 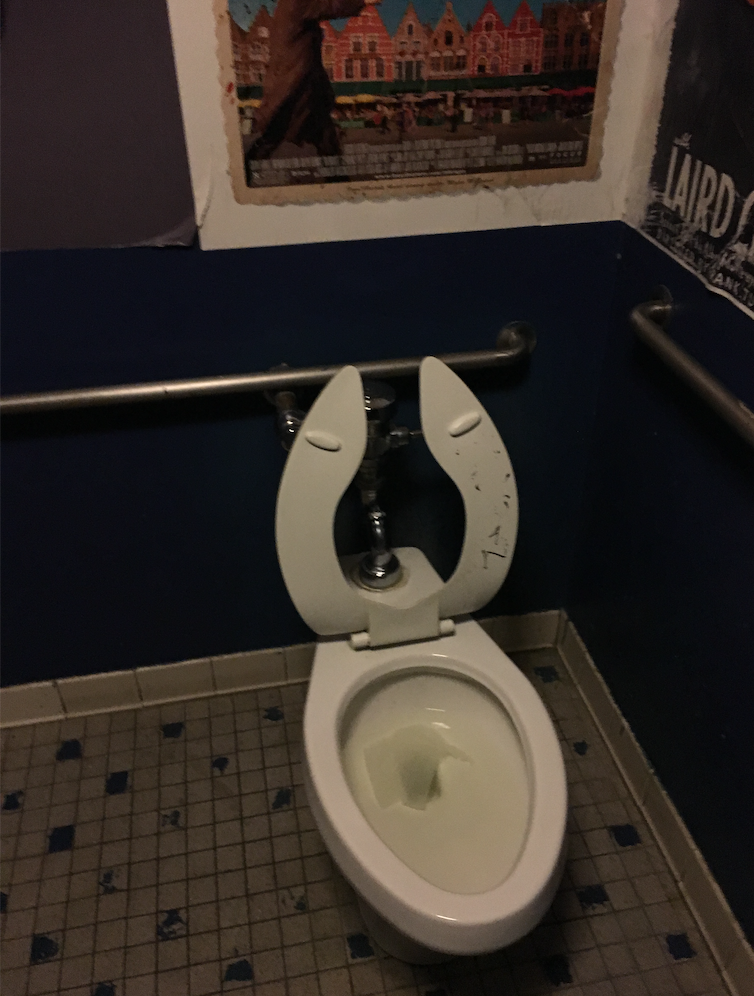 You deserve this, baby.

Writer’s Note: Now that you’ve somehow sat through reading all of this, I guess I’ll share a note about my photography here. Many of the pictures used are either stock photos or general pictures of the venues I’m referencing. While it’s a lot of fun being able to use pics of the bathrooms I’m reviewing, it’s not so fun bringing in a camera or intentionally snapping some pics of a place where people are looking to get away from the limelight.

That being said, it was after a few beers that I did my best impression of blue hedgehog into the stall at Brattle and grabbed some pics of what really needed to be photographed to justify a #1 listing.

But that’s all for now – here’s to another year of healthy bowel movements and, hopefully, some ideal restroom improvements!