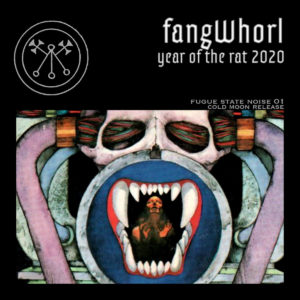 Year of the Rat 2020. The year of the rat was 2020. Confined to small spaces, frenetic and uncertain with feelings that there might be a modicum of cheese or any sort of reward at the end of the labyrinth, we are at least free to wonder whether or not there was any scientific value in our toil.  A sacrifice for discovery, if you will. Or was our wandering aimless? Fangwhorl’s dark and drippy EP swirls in one’s mind like cream in stirred coffee if cream instead turned the coffee blacker. Indeed, Fangwhorl’s coffee would be iced or (cheekily) absolute zero coffee… The point is that it’s cold.

“Parabellum1900,” perhaps the most optimistic of the EP’s four tracks, leads the rest into dismality. Angular computer sounds strike up the 1s and 0s band as a beat—reminiscent of Nine Inch Nails or Autechre—lays the foundation.  Lots of reverb sucks the warmth out of these tracks in a surgical way. The radiating bass walks, zombielike to the clangs and affirmations of a surrounding laboratory-esque ambiance that culminates in what sounds like an ensemble playing sheet metal instruments. That this was released in December, at the end of a very bleak year, is fitting. Listen to the end of “Parabellum1900” for the optimism and hold on to it because you will not get it back.

“Crystronium,” the second track, bears a beat likeness to the previous track but features a mid-rangey black metalesque guitar riff that transports The Listener to somewhere in the Arctic circle at the end of the world or the beginning of a new, brutal, feudal world where Androids are monarchs. (I have an imagination, sue me.) Trapped in an underground reactor that doubles as a bunker, pipes leak and computers feebly try. Like a snapshot or more like a .gif, “Crystronium”  offers context and character but limits the whole story. The track puts the listener in a state, then keeps said listener in stasis. I feel the same way about “Ziegelbrenner.”

It’s rhythmically accelerated and dominantly saturated. “Ziegelbrenner” is the pumping dance track of the lot—the “banger”?—that rouses the misanthrope within. While it lacks a conveyance of plot, it instead hits us with a kind of club-ambiance for future-gypsies. “Ziegelbrenner” does what any good, thick dance track does: It envelopes the listener in an inescapable pumping and momentum fit for Soviet bloc punks. It is oom-pah for the apocalypse, fitting with the theme of the EP as a whole.

The final track on Year of the Rat 2020, “Journal of the Futurist,” is cantilevered over some abyss. It is paradoxically static, but forever falling forward in some sort of Torus loop. The potential energy of this final foray into a Borges/Kafkaesque extra-dimensional infinity lacks nothing, but there is somehow so much more to be had: time goes on, ellipsis… non-sequitur. 2021 might be better than 2020. It’s spring now in our year of the 20-somethings blackjack 21. Hallelujah! Praise now! We are not promised tomorrow. I would say that we should get back to our regularly scheduled programming, but there would—inevitably—be many out there shouting, “programming us? conspiracy!” And another saying, “We have Netflix now; regular programming is a thing of the past.” Still a third would implore you to “Check out this hot new Claude Debussy song Clair de Lune that *premiered?!* on Tiktok.” I’m spiralling into a black hole and I like it even though my every atom is being stretched into spaghetti.

What I am trying to say is: What the fuck happened? We had a poppy opener, a black metal sophomore, a dance track, then a binaural beat, but yet it all had a common thread. Does any of this mean anything? Do I even know what I am talking about, or am I so incredibly exhausted that whether or not anything has meaning is meaningless because my brain has been sucked dry by our collective endeavor into the clean vacuum of space on the starship Descartes? “Journal of the Futurist” makes me mad because I think it’s my favorite off this EP and it smashed my notions of “needing story.” It has the least by way of rising action, climax, falling action, but in it’s placement at the end, it’s winding and carrying on, the toiling, it says the most. It’s an anticlimax. Back to reality. If there ever is an end to life as we know it (and who knows? Maybe it has already happened or is happening…) Fangwhorl will write a great soundtrack to it.

Liked it? Take a second to support Will B. Nexus on Patreon!