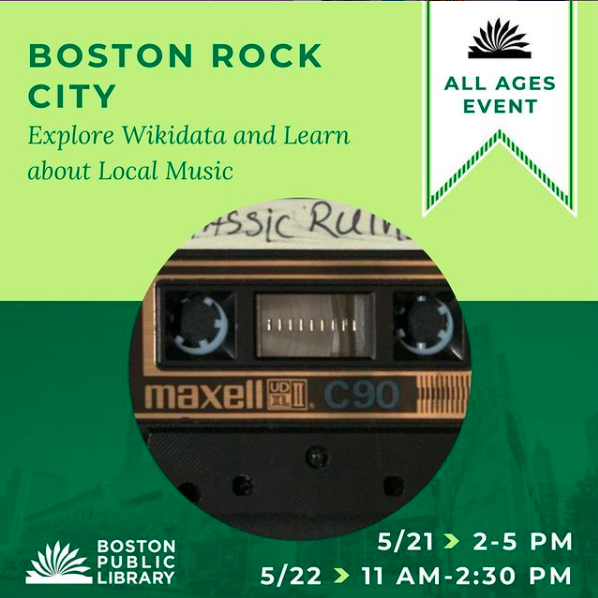 At the head of this piece, every journalist, neigh I say citizen, must know that wikipedia is not a citable source of information, no not even on this website. However, I will also say that for the purposes of gists and suggestions in the quest of life, I have definitely gone down the necessary wikipedia holes that it takes to fully become a cynical and information-saturated American Millennial ‘libtard’, for a PG insult that I have been called on the street in the past month.

Their is a need for PG language here because I am promoting a dang all-ages event here sponsored by the Boston Public Library and Harvard Library. I am always a vocal proponent of archiving and wikipedia more generally (aside from the above mentioned caveat), so the Boston Rock City Editathon is a natural topic for me to write on.

This virtual event is free and open to the public.

Dory Klein & Jared Rex: This edit-a-thon really began with our colleagues at Harvard Library. Peter Laurence, Christine Fernsebner Eslao, and Christine Linklater approached the BPL last year about collaborating around this extraordinary audiovisual collection. In the late 1970s, armed with a cassette deck and a couple of microphones, Arthur Freedman began recording local rock shows; in the ‘80s, he upgraded to a video recorder. Over the course of four decades, he captured thousands of hours of live rock and punk shows in Greater Boston, largely in clubs and venues that no longer exist. In 2011, he donated this massive personal archive to Harvard; the audio recordings went to Loeb Music Library, and the video recordings went to the Harvard Film Archive. The collections are now fully catalogued, but there are still some information gaps. Harvard has been connecting with band members, who in turn have shared setlists, posters, personnel lists, and other materials that add texture and context to this collection.

Harvard is exploring some creative ways to invite community members to help increase awareness of this collection as well as fill important gaps in Boston’s rock music history. Much of this local history has not been documented in meaningful ways that bridge connections between artists, venues, and events. Wikidata presents a creative and accessible way to illustrate these connections while also making this collection more widely accessible on the web.

Wikidata is the structured database that supports its sister wiki projects, like Wikipedia and Wikimedia Commons. This means that a global community of editors can contribute Wikidata “items” like bands, and the process of describing them links them to other Wikidata items like places and record labels and music genres. It’s a lot simpler than Wikipedia in some ways; instead of writing a longform article, you effectively fill in the blanks of a super-organized database. This creates a broad web of linked open data that can be read by both humans and computers (which is why you often see a box of basic info about a topic when you run a Google search–that’s linked data!). One of the most powerful elements of Wikidata lies in this linked data, which can allow us to view connections. One of the primary aims of the Arthur Freedman Collection Project is to create Wikidata entries for all of the bands, musicians, and venues that are represented in Freedman’s recordings, as well as some of the shows themselves. From here, we’ll be able to start visualizing the web of connections in Boston’s rock scene. It’s important to note that this collection reflects local music scenes through the lens of one individual, but this is a great way to kick off a deeper exploration of Boston’s rich rock history.

So now, the BPL has the joy of teaming up with Harvard to do one of the things we do best: connect with the public. We’re thrilled to offer a welcoming and creative virtual space in which patrons anywhere in the world can learn the basics of Wikidata and add their own data entries pertaining to this rad collection. Participants don’t need any wiki experience or local rock history knowledge in order to participate; we’ll show everyone the ropes, and we’ll use information from the collection to fill in these data points. We are excited to collaborate with our colleagues in this way, and we hope that anyone who has an interest in Boston rock history will join us for this event.

BH: What is the Boston Rock City Editathon? And how can someone get involved?

DK & JR: The Edit-a-thon will take place via Zoom on Friday, May 21 from 1:00 p.m. – 5:00 p.m. and Saturday, May 22 from 10:00 a.m. – 2:00 p.m. During this time, we’ll offer an introduction to the Freedman Collection and how to contribute to Wikidata. We’ve carved out a few hours for Wikidata editing, but this event is drop-in friendly, and we encourage participants to pop in and out as they’re able. Like the BPL, this event is free to all! No prior experience is required, nor is music-reading ability, or any Boston rock knowledge. We will provide you with everything you need to create Wikidata entities, and we’ll be on hand to answer questions and help guide you through the process. This event will take place over Zoom and Discord, so advance registration is required using the following link:

BH: What are some of the venues and bands that will be cataloged? Any notable standouts?

Peter Laurence: By drawing on the knowledge of the community, we’re hoping to better describe the full range of the Boston scene that’s represented in the Freedman collection. So that includes more well-known bands like DMZ, Mission of Burma, Classic Ruins, The Lyres and The Neighborhoods, but also a wide array of lesser-known bands like The Loners and The Mighty Ions. And no surprise that the collection includes numerous shows from “The Rat”, but it also features many other important clubs like Cantones, The Channel, The Underground, Bunratty’s, Jumpin’ Jack Flash and Chet’s Last Call. 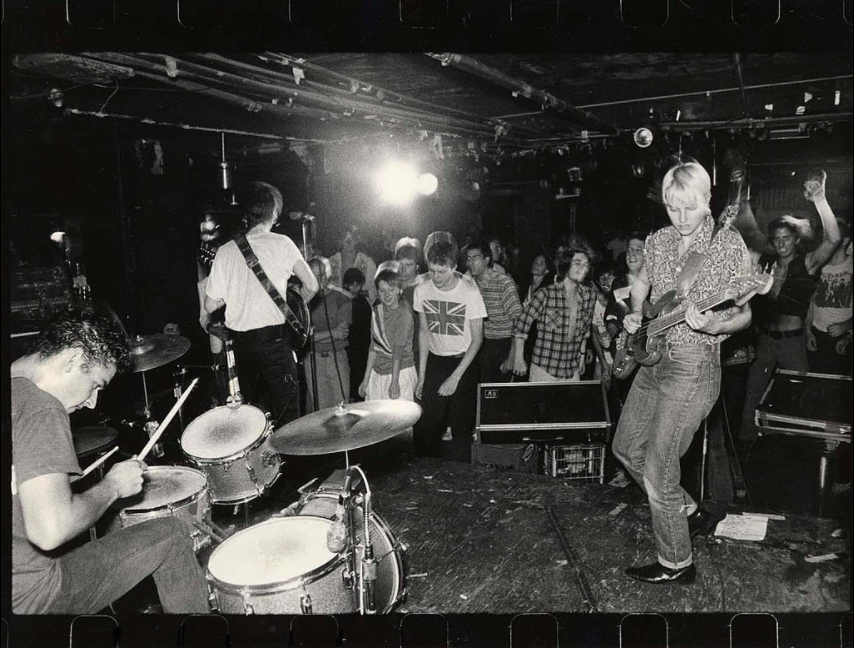 Young Snakes playing at Rathskeller in 1981. Photo by John Henry via Wikipedia.

BH: Why do you think this Edit-a-thon is important?

PL: The goal of the event is to describe in more detail the musicians, bands and venues that were a part of the Boston scene. Adding new Wikidata entries (known as entities) gathered from the Freedman Collection will help to make the people and places of the Boston scene more widely visible to the world.

Christine Fernsebner Eslao: For librarians, experimenting with collaborative projects in Wikidata is an important way to contribute to something that’s available to everyone, and open to input from everyone. In this case, connecting with communities outside the library who also care about the music and want to get nerdy about it can show us what’s possible when we think outside of the library catalog.

On a personal level, I’ve missed going to shows and spending time in the neighborhoods where music venues are. When I read Ryan Walsh’s book Astral Weeks (Penguin, 2018) it was amazing to think about how the geography of the music scene has shifted wildly over time. (Who could imagine that there were enormous shows in the South End???) It’s a lot of work to uncover the kinds of connections that exist between bands and places and communities, and, knowing that not every music venue or band is going to come through the pandemic intact, the work of documenting and sharing what we know about local music feels even more urgent.

DK & JR: So many reasons! An edit-a-thon like this one offers us—library staff, the general public, anyone with access to the web—a chance to contribute to historical scholarship in a way that doesn’t require a great deal of labor or expertise. We’ll offer training sessions and support throughout the event via Zoom and Discord. So we really mean it when we say that wiki editors of all experience levels are welcome! Folks who have never before used Wikidata can join us, learn a really useful skill, and dive in to add information about local rock bands, musicians, shows, and venues. And everyone can work at their own comfortable pace. This event is a great entry point to understand and use linked data. For folks who have an interest in history, or in local rock history in particular, this activity is a new way of engaging with archival collections by democratizing historical scholarship and access to data. It’s not a perfect solution; folks still need internet access and free time, and those are real barriers that a lot of our community members face. But this is a step in a really positive direction.

I’m also hopeful that this experience will inspire folks to keep going with Wikidata, whether they decide to continue with the Freedman project, edit random entries for fun, or develop a project of their own. There are so many opportunities to spur further work and projects.

Finally, it’s fun! I think Wikidata editing feels a bit like a puzzle. There’s great satisfaction, and something powerful, in adding a data point, clicking a button, and seeing your contribution to the wikiverse turn blue on the screen before you—you’re filling in the blanks and changing the data landscape in real time! And participants will be able to virtually connect with one another and bop along to playlists inspired by the Freedman Collection while they edit.

BH: Will there be any follow-up events?

DK & JR: Maybe! A Wikidata edit-a-thon is a new approach to virtual programming for the BPL and for our colleagues at Loeb, and it’s been a joy to collaborate. The Arthur Freedman Collections Project certainly won’t end with our edit-a-thon, so there’s definitely room for future programs down the road. Right now, we’re just really excited to test these waters.