Two years ago, I went to my first Hassle Fest. The impetus for my going was to see ONO, a legendary Chicago group who I’ve seen countless times here. As it was their first ever tour, I wanted to see what an audience in another city would think, not to mention the rest of the lineup was super-solid as well.

I returned to Boston for Hassle Fest again this year and did my best to write about the history, present, and future of the festival for Post-Trash. Since I’m probably one of the few (if not only) people that goes to the Fest from out of town, Sam asked me to talk about what’s been going on in my own city this year.

So with that, here is my 2017 in Chicago in a self-indulgent, mostly chronological order of albums, shows, venues, record stores, and etceteras that will hopefully make you 1) want to check out what’s going on here, 2) keep an eye out for when they roll through New England or 3) at least check out a bandcamp or two.

·         2017 began with Ian’s Party, an annual multi-venue festival that showcases the best of Chicago’s DIY scene in aboveground venues. This year introduced me to DROOL. They played in the basement of the Double Door (RIP) and although I couldn’t see them with my eyes, their lo-fi, post-punk minimalism caught my ear. I managed to catch them a few more times throughout the year, including at a Humboldt Park house playing with an awesome band from Grand Rapids called Ape Not Kill Ape.

·         I will never predict what Haley Fohr (aka Circuit Des Yeux) will do next. I certainly wasn’t expecting the séance-like vibes at Constellation when she played solo in a circle of candles surrounding her on the floor. Her looping guitar and Nico-like baritone may as well have been incantations that raised the dead somewhere (or maybe I still had her show at Bohemian National Cemetery from a few years ago on my mind).

·         Metz playing at the Empty Bottle’s annual fest Music Frozen Dancing because Chicago is just the kind of city to block off a street for an outdoor festival in late February/early March (will be less impressive in future years due to climate change but shrug emoji). 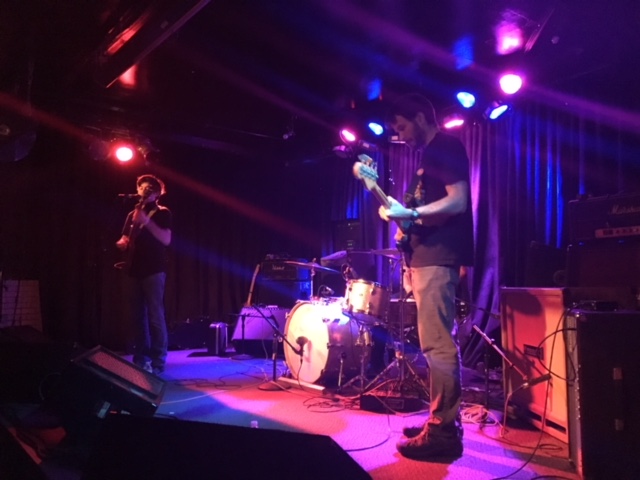 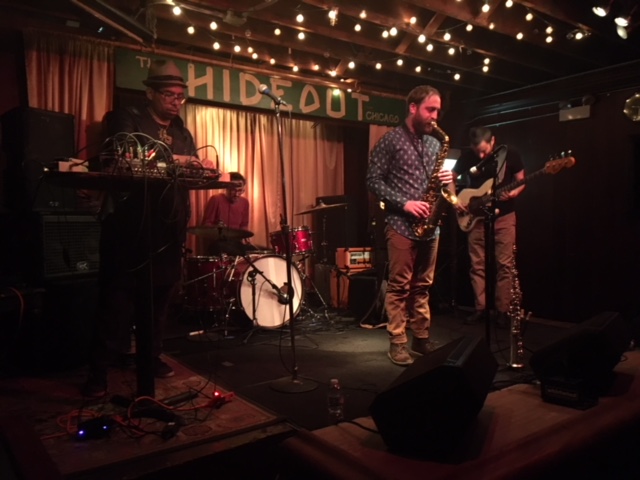 ·         I first saw the Eternals open for Ted Leo at the Metro when I was in high school and they continue to be one of the most unique bands around. Led by Damon Locks (oh hey, he was in that band with Fred Armisen), this time at the Hideout they were joined with stalwart saxman Nick Mazzarella. Dub, kraut, jazz, post-rock, all of it, none of it, just get into it. 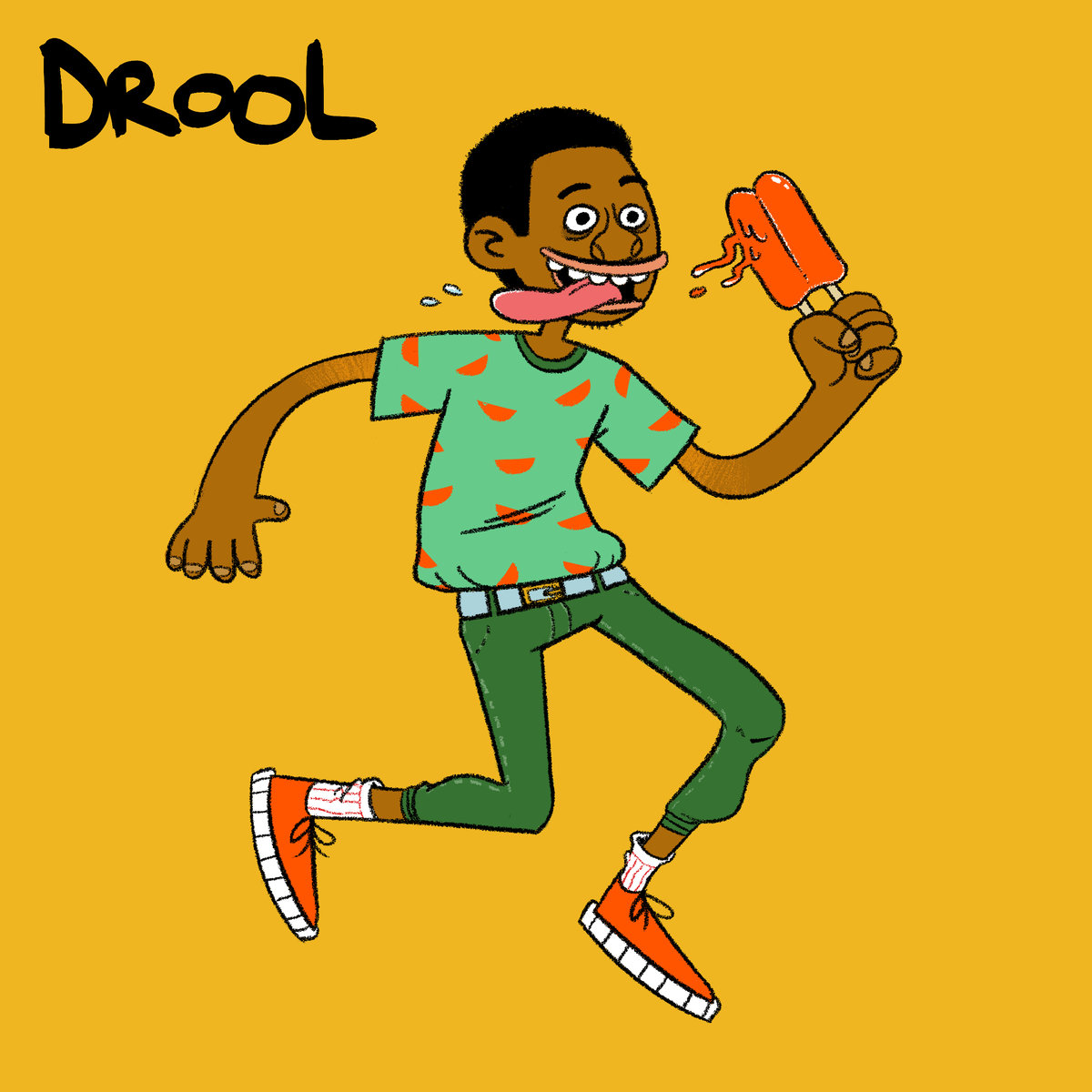 ·         Nnamdi Ogbonnaya released one of the best records this year. It’s called Drool. No relation to the band. It’s a continuous medley of electronic and hip-hop curveballs that keep me guessing no matter how many times I’ve listened to it. It came with a Popsicle stick that was half orange. Still no idea if it was really used or not…

·         Karima Walker played one of the most mesmerizing sets of the year. The looping keyboard and vocals paired perfectly with the looping desert landscape projected behind her. Her newest album was released on Chicago’s Ordinal Records. She was on tour from out West playing with some friends in Den-Mate from DC. Everyone in that Avondale basement became a fan that night.

·         The Dead Boys played Young, Loud, and Snotty at the Empty Bottle. Well, two of them and a couple hired guns. I thought it was gonna be cheesy (and it was sorta) but I also really fucking loved it. 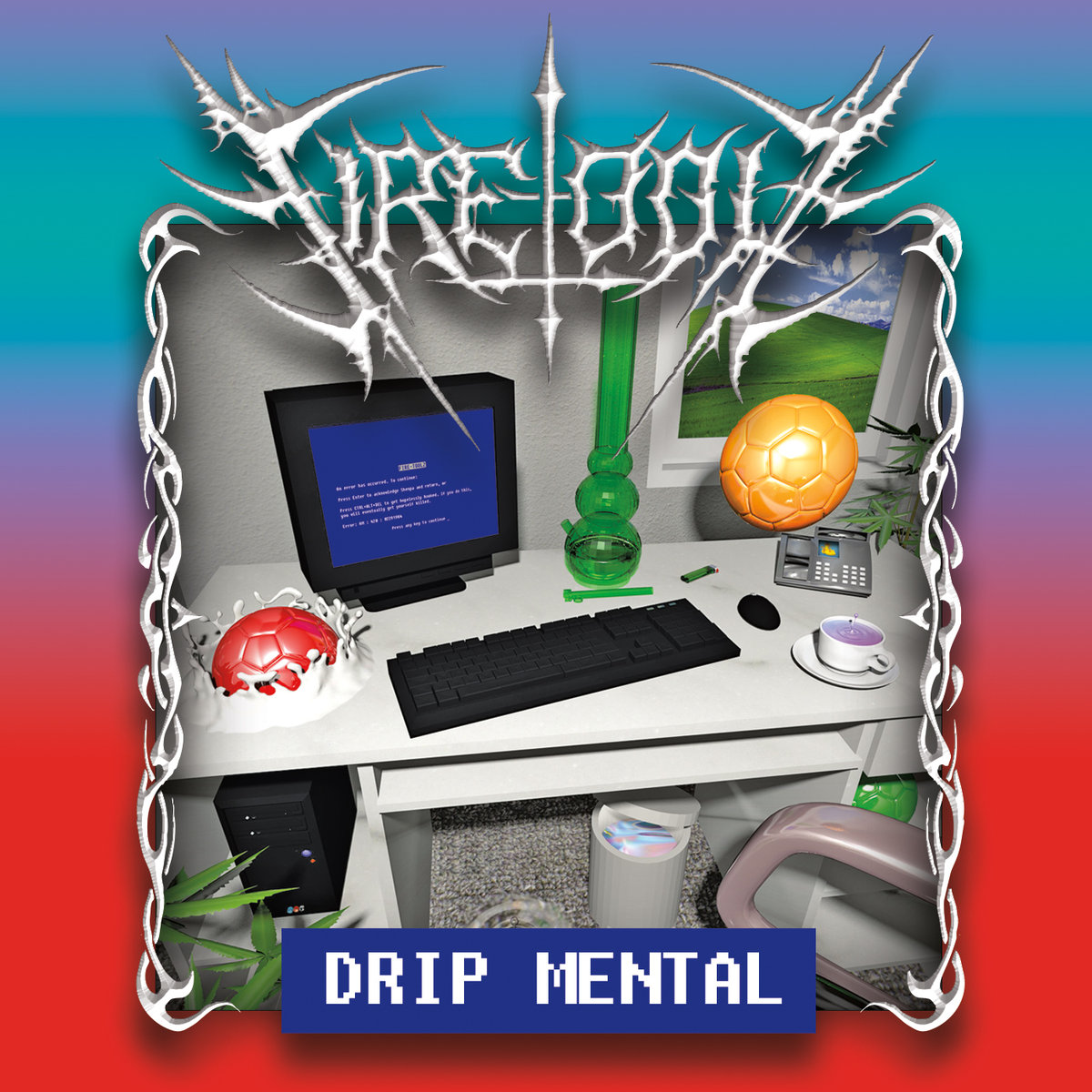 ·         Horse Lords were on tour and played at the Hideout. We all know how great Horse Lords are but I was blown away by the opener Fire-Toolz. Get that new record Drip Mental on Hausu Mountain.

·         I saw Nick Cave and the Bad Seeds at the Auditorium Theater. That is really one of the most beautiful sounding venues in the whole country and Cave sounded near perfect.

·         Sometimes, you just gotta go to Industrial night at Exit on a Saturday and then when it closes at 5AM you go into the parking lot at the restaurant next door and play more electronic music on your phone and dance with your best friend Craig while the sun rises and you’re waiting for a Lyft to get home.

·         My roommate driving me to Uptown to get hangover-pho while listening to Rich Jones’s Vegas EP. This is definitely a pop album but he’s also one of the hardest working dudes in Chicago hip-hop right now.

·         I got a t-shirt from the World Underground. WU is essentially the project of one man, John Yingling, who is primarily responsible for getting me into DIY in Chicago. He now lives in China and has documented the underground music scene throughout Asia for the past few years. I’m forever indebted to him for his continual entrenchment into the weird, obscure, and oftentimes brilliant music across the globe. ·         At a converted ballroom loft space in Bridgeport, I saw Ganser on one chilly August night. The darkwave group’s This Feels Like Living was released last year, but it was one of my favorite listens of 2017. Nadia Garofalo is one of the best frontwoman out there. 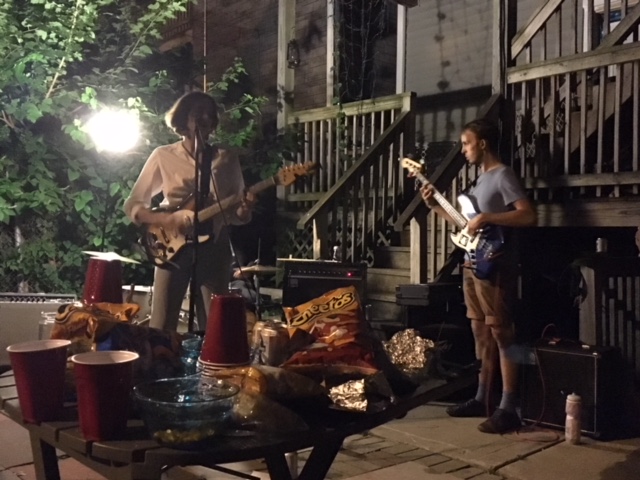 ·         Two days after that, I heard another artist that became one of my new favorites. Fran was playing in the backyard of a daylong little DIY event called Cheetofest (yes, there was plenty of Cheetos). She was the headliner and I was immediately drawn into the Angel Olsen/Aimee Mann-esque sounds of the trio. Check out their debut EP More Enough.

·         Listening to Sun Ra during the eclipse on a cloudy day. Earlier in the year, I was part of an organization that put on a celebration for the life of Phil Cohran for his 90th birthday. He was part of the AACM and briefly a member of the Arkestra in the 50s as well. Cohran passed away shortly after that event and I am truly grateful to be a part of something to celebrate a master’s life.

·         Pledge Drive has a song about Empire Carpet. This may not be that significant to people outside of Chicago, but damned if that wasn’t a fun little surprise to discover.

·         Being front row for Chance the Rapper coming out for surprise set at The Cool Kids at North Coast Fest. Chance has become sorta *yawn* to a lot of people in this town but not me. Dude is nonstop energy and good vibes and majorly philanthropic. Not to mention he continues to release music for free. Punk as fuck.

·         Ryley Walker asking me if I have any drugs (I didn’t) at the Daikaiju show before they set all they’re instruments on fire at Liar’s Club. 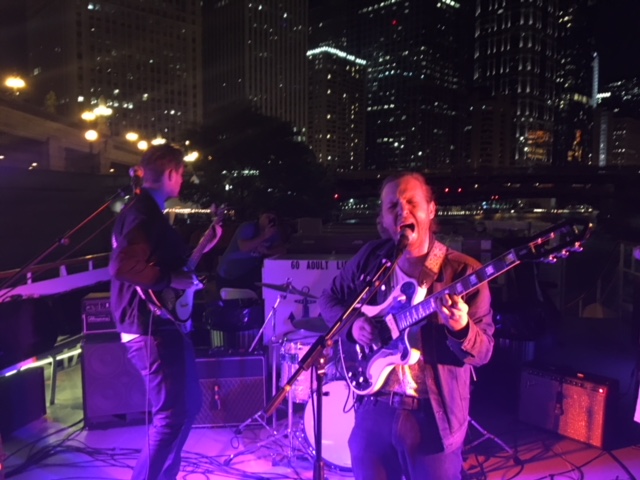 ·         Vaya, Divino Niño, and Santah played ON A BOAT. On the CHICAGO RIVER. And LAKE MICHIGAN. It was awesome. You really gotta duck under those bridges though. And maybe find out how you react to bourbon on the water before you try to consume a whole flask.

·         Whatever happened in that garage in Logan Square where I later got a tattoo in the apartment. There was some stand-up, some hip-hop, and some improve punk led by Sophagus (who’s also a tight fashion designer; I may have bought this jacket this summer).

·         Eating half an edible for a Halloween show at Cole’s Bar with Marilyn Manson, Family Values Tour, CCR, Iggy Pop, and TRL IRL (that’s exactly what it sounds like). Seeing other people sing “All The Small Things” influenced me to sing it at karaoke a few nights later. I may have stripped during my performance… 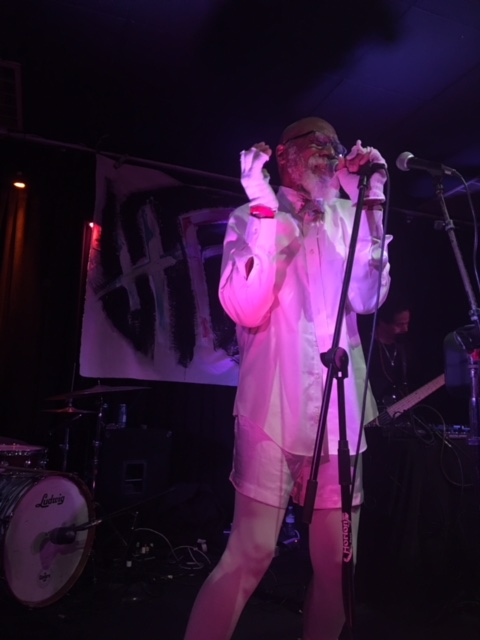 ·         OK, this might sound like kissing Hassle Fest’s ass or forced vertical integration but I’ve gotta mention again how great the festival was this year. Capped off with none other than ONO and Travis singing a tear-jerking rendition of “America the Beautiful.” Keep an eye out for a new album by them next year.

·         I discovered Jamie Branch‘s new album way too late in the year but I’ve been listening to the far-out sounds she makes with her trumpet all week. International Anthem is one of the best labels in this city especially for contemporary jazz (are we in a post-contemporary world yet??) that’s pushing the boundaries.

·         I don’t know how I still haven’t seen No Men live but they are awesome. Listen now for some post-punk goodness.

·         Lykanthea is another artist that every time I listen to her, I wonder, why haven’t I just listened to this non-stop?

·         Permanent Records closed up shop on Chicago Ave. and moved their operations fulltime to LA. Bummer for us, but I did find a Sharkula LP my last visit there, and the shop was quickly replaced with Joyride. So Ukrainian Village may not be entirely dead yet.

·         The Chicago Independent Radio Project (CHIRP) for an FM antennae! Such a huge accomplishment for indie radio. I don’t think that frequency stretches to Boston, but you can check them out on the 0s and 1s here.

·         Eve Ewing and Kevin Coval had two of the best poetry collections released this year, both on Haymarket Books. This poetry scene in this city is as vibrant and diverse as the city’s music scene and as they often overlap, I’d be remiss to exclude these two names.

·         DIY venue Wally’s World may be dead by Maximum Pelt lives on. Dehd put out a solid album that will be perfect when this city thaws again.

·         I found an LP by Distractions last week, an album I enjoy but never even knew it was pressed to wax. Unfortunately, the fourth track was skipping so the fine folks at Record Breakers are ordering me a new one. Something to look forward to in 2018.

I’m sure I’m leaving out plenty of amazing stuff. I didn’t even make it to the Black and Brown Punk Show or Frontwoman Fest or would it have been appropriate to include Zine Not Dead here? Of course, Ian’s Party is coming up again. And Buck Gooter and Ak’chamel, two recent Hassle Fest bands, are coming to Chicago. And there’s always more being released. We may be in the middle of a political shitstorm across the country, but hopefully you’ll find something on this list to make things just a little bit better.

Congrats to the Hassle team for opening a new venue! Here’s to hopefully having a chance to check it out in 2018.