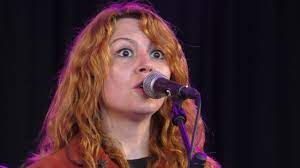 (That may sound like a low bar, but I’m one of those weird nerds who was honestly so good at calculus once upon a time.)

Fresh off their Coachella performance, the Amsterdam-based, Turkish psych-rock group took the stage at the Sinclair on Tuesday night, April 26, in a multilingual, mystical mele. Altin Gün came into the spotlight with Grammy nominations on their second album, Gece (one of two albums the band released in 2019).

Brazilian staple Sessa opened the show with a sensuous, stripped-down sound that bloomed into a riot of bells and bass with fluid Portuguese vocals. The short opening set was a cascade of smooth guitar center-stage, punctuated by bursts of furious, cascading, concentrated sound, backed up with drums, handheld percussion, and two ethereal vocalists. Wrapping up the set, Sessa reported that Altin Gün was on their way to the stage to “melt your minds.” And he wasn’t wrong.

The headliners opened with an amped-up rendition of “Rakiya Su Katamam,” which served as a showcase for the group’s distinctive crystalline vocals (Merve Dasdemir), traditional instrumentation (Erdinç Ecevit Yıldız), and ripping guitar (Ben Rider), all in quick succession. From there they didn’t let up on the momentum, catapulting into high dance energy with the hit “Vay Dünya” off Gece and then frontloading new music with “Cips Kola Kilit” off their 2021 EP Badi Sabah Olmadan. Bassist Jasper Verhulst was visibly having the most fun of anyone on stage, bounding into bass-heavy charges with rich, grounded energy and pushing heavy ‘70s vibes with raw, killer bass. Yıldız’s bağlama playing was a marvel of light-speed finger work, interspersed with keyboard and his own sonorous vocals. The show hit a high point with “Badi Sabah Olmadan,” another new track, and culminated in a thunderous encore.

You can tell when a band’s been missed, and the crowd had clearly missed Altin Gün something awful. It’s exactly the kind of reverent reunion the Sinclair is suited to: a warm-hearted, dance-heavy celebration that culminates in nonaggressive crowding at the merchandise table post encore. The show felt immediate and personal, with a real sense of heart and presence.  The show had the air of a homecoming, as unintuitive as that sounds—in the sense of a devoted fanbase coming home to this distinctive, powerhouse band.

Altin Gün’s live sound is incredibly tight and vibrant, one of those raw-energy concert experiences that you feel in your bones for days afterward. Their music—roiling psych rock beats structured around a folk sensibility—reminds me of how a young Maggie Rogers once described her music: after growing up as a banjo player and then having a “spiritual experience” with dance music in France, she set out to make folk music “where my soul is” with the “backbone and energy of dance music.” The outcomes of Rogers’ and Altin Gün’s music journeys are very different, but the essence is there: A seeking, gorgeous, feels-like-nothing-else story inside the music. It’s something that the word fusion doesn’t do justice to.

Their stop in Boston is one of many international destinations for the unfolding tour, which, if Boston is any indication, will be a triumphant return from COVID’s intense creative isolation with explosive new offerings.

Liked it? Take a second to support Alison Lanier on Patreon!