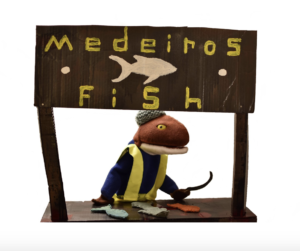 “This is the fourth van key that slipped out of my fins onto Eastern Avenue. Rob was nice this morning. 4:55am he let me bag 16lbs of day old stripers and a haddock. The mackerel this week’s just $2.10 a pound for the older stuff. Steve Connolly’s isn’t that bad. Good market for Gloucester. I don’t mind being this dark this time of year. Those lost keys on Eastern can’t shine this morning’s failure into my codeyes. ‘Gansetts with a shot of vodka. It’s probably not worth it heading to Danvers Square anyhow. Crowds aren’t like they once were. Like they once were when I would swim up to my father’s trawler, offering to school the pollock. You know Ma. Codfish aren’t the most motherly of creatures. Father would ignore my cries. Here I am starting another morning haggling the bodies of my own kind. Well, this time on foot. Unless I can shimmy some wire into this ignition.

I’m on the 6:15am commuter. Conductor doesn’t seem to mind the fishy waft. I think I got it with this client in Sonkhonkett. This artist of sorts in the marsh down there, “The 617 Rage” popped out of the reeds one evening as I was foraging for horseshoe crabs. They got blue blood. Real blue blood, not those WASPs in Wenham. Blabbering about a “Sonking Marsh Witch” that’s placed seven roundabouts on the Salem Turnpike in the town, Sonk. Boulevard. He sings, or raps, I can’t tell the difference in front of Al’s Packie. He says that it’s next to a sausage and fish market that’s at it’s tail end. Boy, this fish stand creeks. Though this should be a break. A good break that might get the van loans paid. Or at least something closer to less turmoil. I may have glycoproteins in my blood but that only shields me from the Atlantic cold.”