Mt. Greylock has plans to electrify the Boston DIY scene. An alternative rock band of four roommates who love to transform their home into a house venue of the same name, Mt. Greylock is hard to forget. Gibran Mobarak, Preston Kra, Max Hollenbeck, and Joe Messina all attend Berklee and have a passion for showcasing local talent, playing music with each other, and proving that, as said by Messina, “Boston is nothing to be fucked with.” 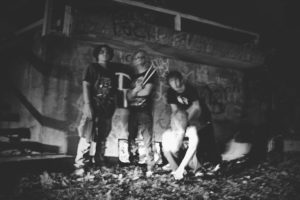 At its start, Mt. Greylock was solely a venue, with the band forming soon after. The moment they moved into their house, they knew they had the space to be a standout venue in the Boston DIY scene. “I think what differentiates us from a lot of different house venues is that we have our shows literally where we live. People who run house venues usually have them in the basement or somewhere more secluded. With us, it’s just like you walk right into the house and it’s right there. You’re not missing it,” said Mobarak.

Mt. Greylock’s exponential growth shocks the group when they compare it to their first moments living together. As both a band and a venue, it has bloomed into something none of the four expected. “At first we were just like, ‘Yeah, we’ll have some shows here and we can play every once in a while,’ but now we have actual events we plan out in advance,” said Messina. “A lot of recognition comes from being both a band and a venue and that has changed us so much in the past year. It made us a lot more recognizable.” According to Kra, it wasn’t until last spring that they began to take both the band and the venue a lot more seriously given all the traction they gained.

Being roommates has allowed for plenty of free-flow creativity. Lately, the band has been working on recording a few new singles, namely “I Would Say,” a song that they have been performing live for quite a while. Living together has allowed Mt. Greylock to constantly work on new projects for the band and share ideas with one another as soon as they arise.

When it comes to the writing and brainstorming processes, “it’s really organic,” said Hollenbeck. “Joe will be playing a song in the living room or I’ll be working on something… then someone hears it and Gibran will be like ‘Hey let’s go down and play it’ and that’s kind of cool.” While they may be listed as an alternative rock band, they are influenced by a wide variety of genres and styles. “People have called us the fondue band,” said Kra, as they are known for dipping their toes in all sorts of styles.

Mt. Greylock has become a prominent figure in the Boston music scene, but they traveled to New York City this past summer for their first tour, expanding their reach. “It was a whole road trip with all four of us packed into a car with all of our shit. It was the first tour-tour we kind of did. We had the problem of getting lost. That was the failure, but with every failure, there’s a success story after,” said Kra. “We figured it out, we overcame it, and we played the gig the next day.”

For the future, the band plans to continue doing what they’re doing and expanding their audience. The most important part is “being able to play with my friends music that is just bottom-line fun,” according to Hollenbeck.

Mt. Greylock strives to showcase the underground talent that surrounds them as a venue, which is just as important as showcasing their own music. “We kind of have developed this circle that we have of all these creatives that are always over here. We’re intermingling between bands and genres and different creative directions,” said Messina. “All of our friends are extremely talented in their own roots. For me, I just want to see all of us succeed in whatever we want to do and all come up together.”

Follow @mtgreylock on Instagram to see all upcoming shows and events. The release date for their next single “I Would Say” is TBA, but you don’t want to miss it so be sure to keep up with the band of ambition that is Mt. Greylock.