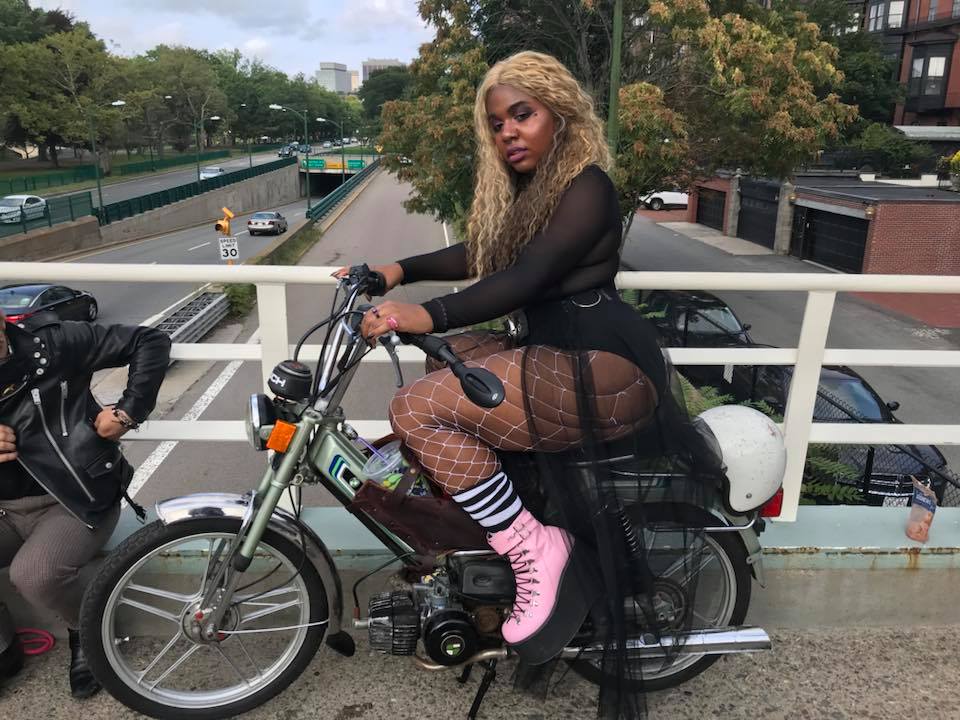 Mick Beth is one of Boston most exciting rappers, and straight up just one of Boston’s most exciting performers. They just slayed @ the show that we @ the Hassle threw the other night w/ Quelle Chris in Dorchester, and they shall slay again soon no doubt.

Dan Shea: Mick Beth! How are you? what would you like to tell the people and get out of the way right off the bat?

Mick Beth: To start off, I want people to know that I am not afraid. I think I spent a lot of time in fear, and I just don’t have time to indulge it anymore. I also want people to know that I’m non-binary (or genderqueer), just like some of your faves [Amandla Stenberg, Kehlani, Sam Smith, Jonathan from Queer Eye] I use (he/they) pronouns and If that’s confusing they probably should be using the search bar on google! Im a rapper, a singer and a drag performer. I also want people to know that the music I make is intended specifically for queer people of color. Especially black people. I want everyone, no matter what you are, to stream and appreciate my music. I want everyone to like my music! I want everyone to hear it and find something that they can relate to, or draw from. that pushes them forward. I want to make people feel seen and validated, but in the end; I’m a black person who wants to uplift other brown queer people- especially other trans people. I also want to state that this is one of the first interviews I’ve had that hasn’t been centered around my gender; which I appreciate, because it validates my artistry.

DS: I love the I’m Baby EP, truly one of the best records I’ve heard from around these parts all year, what are some of your biggest creative influences?

MB: Wow thank you! I’m so happy to hear the response to my debut project is so positive. The ‘I’m Baby’ EP was heavily influenced by the craziness of being a southern person who wants to be kind to everyone and realizing that these bitches are not your friend. Not everyone is going to root for you, and that has to be okay. The artists that I am heavily inspired by and was listening to the most when I wrote the EP am definitely were Maliibu Miitch, Rico Nasty and Sukihana the Goat. I’m really inspired by black people creating black music for other black people. I’m also heavily fueled by the ways I’ve been made to feel by people who disrespect myself and other people who share my identity. And I’m really happy to know that so many people liked my EP especially because you want people to stream your music you want people to support you. But at the end of the day I’m a weird black kid from the south who wants to other weird black people wherever I go.

DS: You’re originally from Atlanta right? How are you liking living in Boston? How has your experience been up here, and what have the creative communities you’ve interacted with been like?

MB: I definitely miss aspects of the south. Mainly the food. And the amount of other black peoples, though I will say, Boston is probably the queerest city I’ve ever been to. Atlanta is gay but I never really experienced it as a visibly queer person. Living right outside Atlanta was cool, though while I lived there I found that there was a lot more homogeny in what people were doing. There’s a lot of binaries in how people view each other. I’d never really spent time with other nonbinary people or a large group of [out] gays before moving up here. I don’t necessarily enjoy most of what Boston is known for, but I love my Boston. The drag scene here is incredible, the underground is crazy- but the real Boston underground is brown and queer and femme. I’ve been heavily impacted by a lot of black and brown queer people, and becoming more radically femme every day.

DS: Do you have any creative and/or artistic philosophies you’d care to share?

MB: I think the philosophy that’s driven me this year is “ if it didn’t kill you, why let it defeat you?” I said that to myself while I was having a hard time back in March, and it’s definitely driven me all year since then. It was a definite undertone in the ‘I’m Baby’ EP. for a lot of the songs I kind of just picked a feeling or an idea and decided that that was what I wanted the song to sound like. So the title track is actually about gaslighting. So much of what fueled that project hurt, but I knew that the kind of pain that comes from an attack on your identity is something that’s going to resonate with people. There’s a lot of shit nonbinary black people have to go through. The world has never made space for black people. black people have never made space for queer people. And cis [queer] people have never made space for trans people. So finding people who I can truly be safe with has been a process of trial and error, but finding my chosen family has helped me find the strength and drive to keep going. And just realizing that pissing people off can be good. Not because you’re looking for a fight, but because some people are gonna be mad seeing you succeed. Especially when they’re not rooting for you to win.

DS: I think we’re lucky to have performers like you in this often stale town, tearing apart expectations, and setting parties ablaze, what the F is next for you??

MB: I’m performing my 40th show of the year on the 29th, so after that I will be going “underground” so to speak. I’m always writing new songs but it’s time to start recording the album. Next year is the year I take Mick Beth outside of Boston, drop my debut album, and throw even more events! This year has been the most delicious beginning, and I’m so excited for what comes next. Meeting more queer people, creating more brown femme spaces. Reaching out to all my favorite artists to see who needs openers, and try to get Mick Beth some slots on a North American tour. I have high hopes for the coming year, stay tuned.