On March 15th, the multifaceted Boston City Hall was the site of an interview conducted by Christopher Lydon, host of the public radio show Open Source. The interviewees were Mark Pasnik, Michael Kubo, and Chris Grimley, each an architect and co-author of the 2015 book Heroic: Concrete Architecture and the New Boston, whose subject matter was the event’s focus. Heroic profiles thirty of Boston’s concrete-centric structures built during the 1960s and ‘70s, with the intention of bringing a more nuanced perspective to these buildings — often, the authors contend, misread by the public and city officials.

My levels of skepticism were high going in to hear Pasnik, Kubo, and Grimley speak, mostly due to the relabeling of brutalist architecture — fortress-like buildings such as City Hall itself — as heroic. It seemed too positive and sparkle-eyed of a word, given the complexities and often imposing appearances of what it aims to describe. More than that, it seemed to unintentionally recall the bullying, hypermasculine foundations of brutalism, and 20th century architecture in general, full of glorifying statements about virility and misogynistic repudiations of effeminate qualities. After all, consider the supposedly heroic character of Batman: a white, male, fascistic billionaire who attempts to reduce crime by beating the piss out of punks in alleys.

So I was somewhat pleased when the authors explained that they saw the word in the sense of a Greek tragedy: hubris complementing heroism. During the Q&A, Grimley likened the heroic project to the doomed flight of Icarus. Architects attempted to reinvigorate a troubled city by designing concrete (rather than glass and steel) buildings with grand civic aspirations. These tended to be met with bewilderment, poor maintenance, and, in some cases, demolition. Boston’s previous mayor, Thomas Menino, for example, actively neglected to upkeep Boston City Hall.

My remaining reservations were twofold. First: I felt as if the tragic element was mostly being consigned to the buildings’ receptions — not so much to the disparity between their blunt, raw forms and the architects’ utopic intentions. But, in its own way, this was provocative; intention is often sidelined, if not completely ignored, in favor of an audience’s subjective experiences. Here, a keen interest was taken in what these concrete structures were meant to symbolize. Second: I wonder what it means if the renaming of brutalism, a style propagated practically entirely by men, is principally being done by men as well. Pasnik perhaps inadvertently touched on this issue by referring to one of the book’s female interviewees, architect Mary Otis Stevens, who was critical of the “heroic” label, and whose interview is entitled “The Anti-Hero.”

The period preceding and including Boston’s concrete period, if it can be called that, demands a quick review here for its dramatic events, as grand as they were troublesome. In the 1950s, Boston was suffering from issues such as record-high tax rates, white flight to suburbs, a declining population, and political corruption. In response to this, the city took measures that included razing parts of the city’s West End, converting Scollay Square into Government Center, and clearing out blocks of the South End’s low-income housing for industrial development.

The displacements caused by these actions inspired a subsequent suspicion of so-called urban development. At the same time, there was an enormous cluster of global architectural talent in Boston. Over a sixteen-year period, nearly one-hundred-and-fifty heroic/brutalist buildings were built. Besides its formal qualities, then, City Hall (1968) was the perfect site for this sort of interview, representing a time when architects were given an incredible amount of control over the evolution of Boston’s cityscape. Factors for this growth spurt tapering off around 1976 included the oil embargo, which made further federal and civic construction too expensive, and the important urban planner/politician Ed Logue’s departure for New York City. 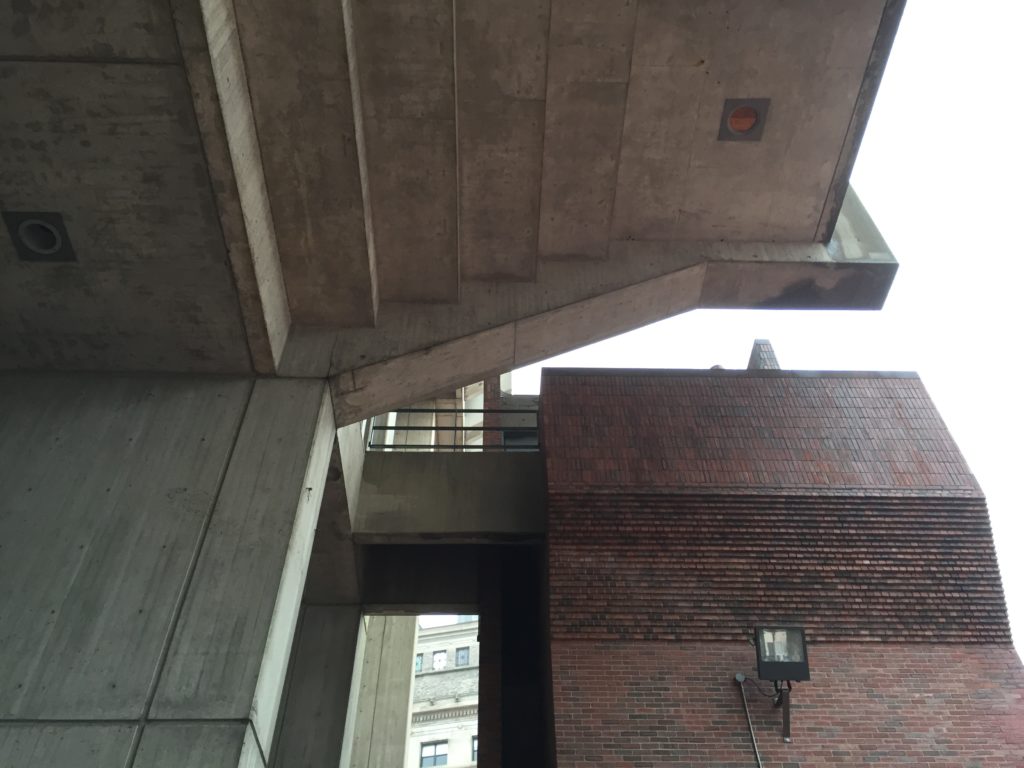 What most interested me about this interview, and the subsequent Q&A session, were their implications for current-day Boston. As the city continues to see an explosion of banal, textureless buildings resembling segmented ice cubes + Holiday Inns, Boston’s best brutalist/heroic buildings have taken on a newly exciting quality. It is perhaps easy to argue that a building like the Francis A. Countway Library of Medicine is ugly in a traditional sense; what is tougher to argue is that it is uninteresting. At their best, these buildings exhibit a strange playfulness and an assertion of architecture as an art of emphatic volume that simply isn’t present in Boston’s newer structures. Grimley nailed this characteristic by excitedly describing the Government Service Center, whose construction was perhaps forever halted in 1971, and which would fit right into an environment from the Halo video game series, as “batshit insane.”

I couldn’t help but repeatedly look up at a part of City Hall’s ceiling, prior to the interview, and be captivated by the idea that it resembled a sort of dreamlike playground, marked by blocks to climb on and recesses to hide in, inverted and elevated. As I’ve grown older, the sense of the mysterious — of being caught up in something ineffable and larger than myself — is a standard that’s become increasingly important, and it is to these buildings’ credit that they can invoke that sense through their shapes and spaces. If the Government Service Center exudes the forbidding air of a fortress, it also, through its sheer weirdness — its rippling stairs, cylindrical corrugated bulges, and elevated window-eyes — asks to be entered and explored. For better and for worse, Boston’s finest brutalist/heroic sites command your attention and ask to be looked at.

The problem is that the success of a building (unfortunately) doesn’t solely hinge on how interesting it is, and it is possible to have mystery without that portentous aspect. One of the major ongoing conflicts between the public and this architecture, besides all of the miserable dystopic ways it was employed for apartment complexes and offices, is that it harbors a warlike and defensive quality: bare towering walls, a minimal admittance of sunlight, unintuitively located (and wheelchair-unfriendly) entrances, and so on. Brutalism’s closest parallels are the temporal structures built for World War 2 and European castles from the medieval period. And while the long passage of time and our seeming collective romance for medievalism has allowed us to invest those castles with a fanciful air, 20th century concrete buildings aren’t afforded the same luxury. Their construction is still very recent, their political dimensions caught up in modernism’s destructive legacy. We all bring our own associations to the table, and sometimes an intellectual argument, no matter how authoritative, just can’t alter those associations. Moreover, it’s possible to appreciate a building and nonetheless find it civically inappropriate. Would some of these concrete complexes be better off among a Scottish plain? 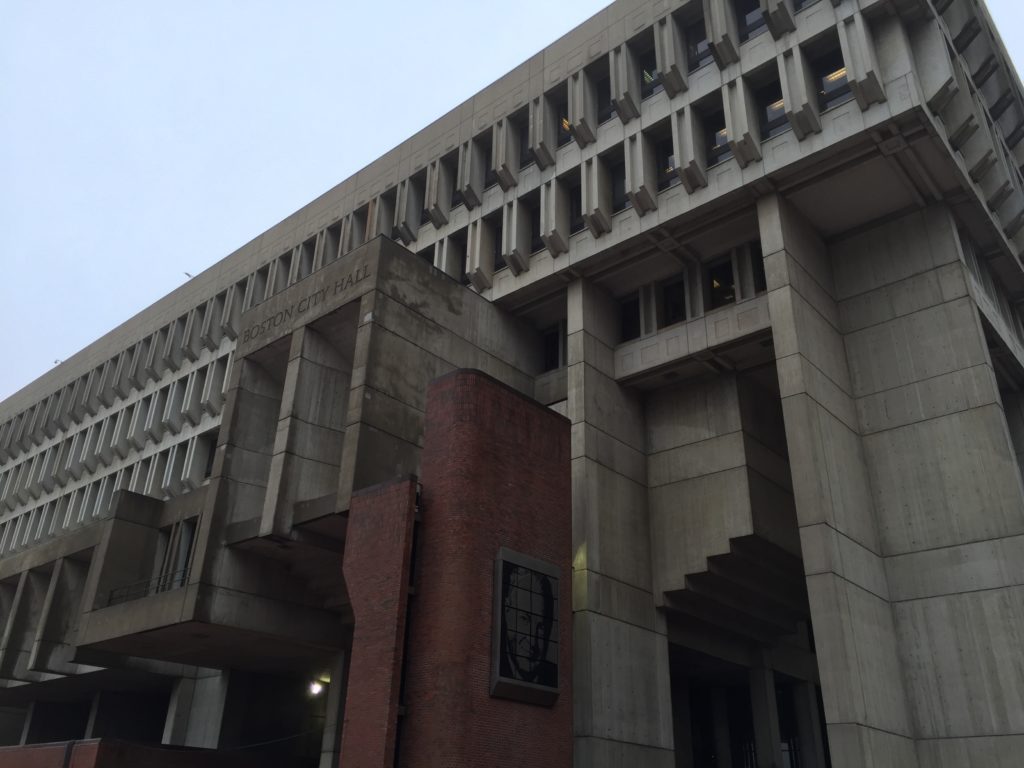 This gets back to a question posed by Pasnik, Kubo, Grimley, and Lydon: how do we adapt these buildings to current contexts? There is no easy answer. Many Bostonians’ perception of their ‘60s/’70s concrete architecture seems to run counter to the architects’ original utopian visions, especially now that Boston has the widest income gap of any American city (the Boston Civic Design Commission’s interests are very much tied to those of realtors and private developers), and will soon become more or less unlivable for anyone who doesn’t earn a six-figure salary. I say “seems to” because, as Kubo noted, it is unclear how much of these buildings’ touted repulsiveness is a self-fulfilling phenomenon. If a tour guide or Boston Globe article introduces City Hall by mentioning how it is “often described as one of the ugliest buildings in the United States” (and it definitely is not; there are dozens and dozens of other concrete buildings in Boston alone which heave spiritual depression at passersby like a wrecking ball), how many of the otherwise open-minded tourists and readers will let that immediately and fundamentally color their opinion? This prefatory carefulness is perhaps more important than renaming brutalism if the style’s champions want their objects of affection to be preserved and/or renovated.

A newfound appreciation for our concrete landmarks carries the possibility of wondering what Boston’s future building projects could look like. Much of the city’s new additions can be partly read as reactionary responses to the past’s concrete fortresses. In place of that, we now have buildings whose designers have often prioritized admitting as much natural light as possible. Volume and mystery have been replaced by flatness and transparency. There could be a compromise, though — something in between these extremities, where heft and novel geometries are complemented by brighter colors and more practical fenestration. Maybe, as Lydon suggested, it will take getting an architect as a mayor to put us on that course, and to also halt this current campaign of treating the quantity of buildings being constructed — as opposed to architectural invention and an addressal of our economic chasm — as the main civic value.

Liked it? Take a second to support Ario Elami on Patreon!