For me, an individual known for being very bad with her money, it was a prolific year at the Black Markets.  Coin was dropped, friends were made, and incredible objects were obtained and thusly gloated over. It’s a lot of fun.

The Black Market means more to me than scoring some cool shiz, however.  I stopped by the April ‘18 market and saw both locals and visitors alike laughing together, listening to music, connecting, and exchanging ideas.  I decided, at that moment, that I would eventually represent the organization responsible for such an experience. And presto, here I am! Isn’t it great when life works out the way you want it?

Of course, I’d be loath to exclude the real real meaning of the Black Market: Have you ever stopped by and seen our vendors, or perhaps taken a look at our vendor lists?  There are a ton of people out here with a dream to share, and they can’t share it without community support.  Of course it’s always awesome if that dream comes in the form of awesome, local, sustainable goodies.  What kinds of goodies, you may ask? Sooooo many kinds. Here are a few of my personal favorites: 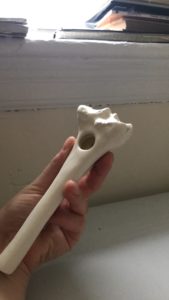 I bought this piece at the April Black Market all the way back in the day when we were hosting ‘em at the Elks on Bishop Allen.  I remember being drawn to the lil beauty because it was right around Passover and, as some of y’all know, that’s a holiday where shank bones really get their time in the spotlight.  I joked with Ruth Plaster, the aptly-named genius behind MudHedz, that this piece would be perfect for smoking “the bitter herbs” (yep, that’s more Passover humor) and I’ve been repeating that joke ever since to middling responses.  Do you name your pipes? I always do. I wanted to name this piece Rhiannon, but my friends beseeched me not to name a third (or fourth?) bowl of mine after Stevie Nicks. They’re probably right. Anyways, her name is Artemis, and I love her to death. 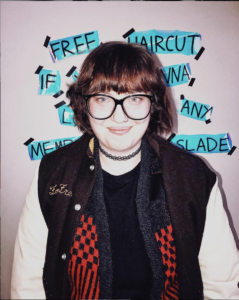 I frequently refer to this as the best haircut of my life.  Christine has some sort of magic muscle memory thing where she can give you exactly what you describe, while dancing around to music, with a PBR in one hand, and probably with half her brain tied behind her back.  I was one of her more drastic cuts- I wanted about 5 inches taken off and the remaining locks hacked into some sort of undone-but-done 90’s punk bob. Anyways, she killed it. Afterwards, when I told my astounded friends and amazed neighbors that my new ‘do cost a mere $20 (plus tip, folx), the ladies were floored and the men said, “wait, is that supposed to be cheap or expensive?”  Average salon prices will run ya about $70 as a low average, fellas. Consider yourselves lucky. 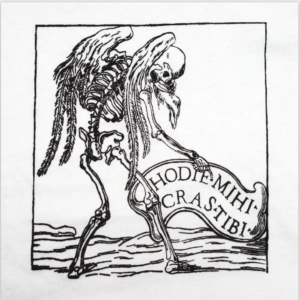 Let’s be honest, is there anything creepier than Latin?  As a bona-fide creep myself, I knew I loved Purgatory’s occult and arcane vibes, but wasn’t sure I wanted to shell out an extra $18 at the end of a looooong day of buying things.  You gotta give it up for Latin, though: Nothing says looming dread, dusty catacombs, and the weeping angel of mankind like a sprinkling of that ol’ dead language. Also look at that cool skeleton!  It’s got wings! After painful deliberation, I asked one of the Purgatory folx what “Hodie Mihi, Cras Tibi” meant- after all, it’s been a while since I attempted to learn that creepiest-of-creepy languages (specifically, I think I was still going through puberty when I threw in the towel and switched to French)- and they told me it meant “Today me, tomorrow you.”  I had to stop putting up a fight at that point. Some things are just too ominous to pass up. 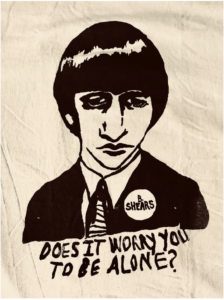 I’m not gonna lie- this graphic tee is gonna become a patch real soon.  But that’s a promotion in my book: I’ve got one patch jacket that I wear constantly, and that patch jacket has one giant back panel, and that giant back panel is essentially a billboard for the things I love most in the world.  And what is that, you ask? That would be Mr. Ringo Starr. Amelia from MerchMerchMerch and I seem to have this in common. Some may say that it’s silly to favor a musician who famously wasn’t “even the best drummer in The Beatles,” but to that I say, who had the most heart, huh?  Who was the silliest one? Who penned and performed the pan-generational anthem that is Octopus’s Garden? What about Yellow Submarine? Why are all you classic rockers afraid to have a little fun? At the very least, by turning this beautiful hand-designed tee into a patch, I can broadcast Amelia’s (implied) message that Ringo is the best by virtue of being himself a very sweet and goofy dude in his prime, and that talent doesn’t really matter as long as everyone’s having fun.  If anybody needs me, I’ll be over here dying on this hill. 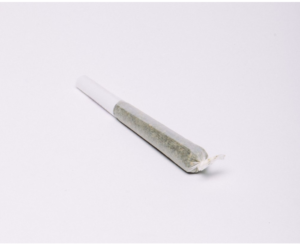 Guys, weed is so great.  It’s even better when it clears your mind and doesn’t give you anxiety.  And it’s the best when you don’t have to roll it yourself, because, if you’re someone like me, your fingers are just big flappy sausages that you have no control over.  Seriously, guys, I scored a 27 WPM on that online typing test. It’s abysmal. How can the world expect me to roll my own Js when I can’t even play a Gameboy properly?  Thing is, I’m not really ready to give up joints as a concession to my lack of fine motor skills. They’re so cool! They’re meant for sharing! They make me feel like I’m at an underground SDS meeting in the 70’s!  And with CBD, I can actually remain productive and calm after taking one of these $15 bad boys straight to the face. All of this is thanks to Wintermute and their collective efforts to promote CBD through sustainable, organic practices in the smallscale.  As their website says of the pre-rollies, “it doesn’t hurt to share with friends,” so think of me when you buy one.

The Unnatural / healthy as a horse.