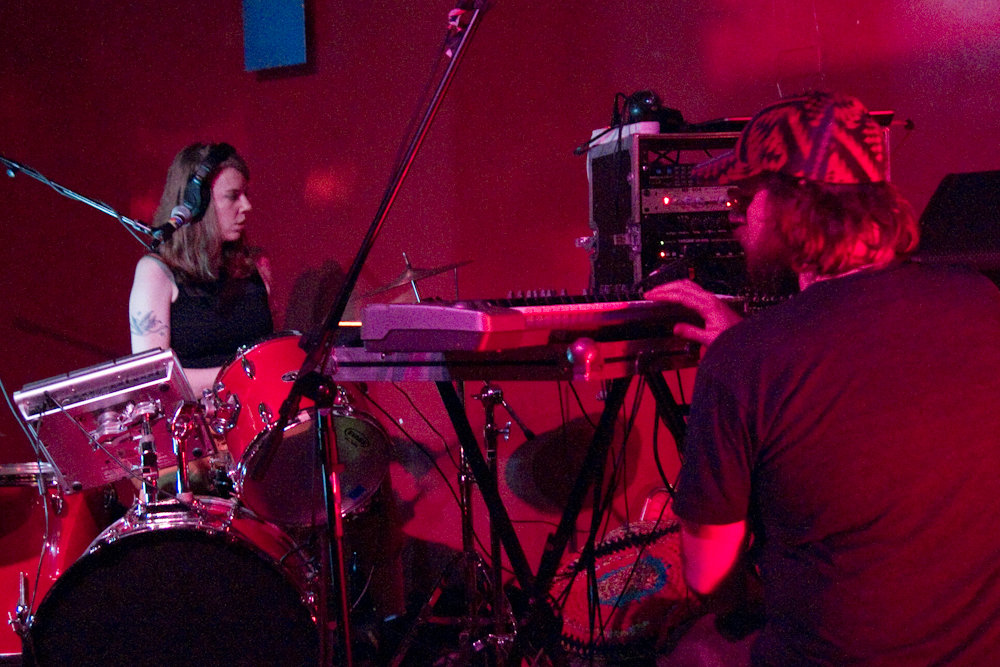 Baltimore duo Wume, Albert Schatz (keyboards, electronics) and April Camlin (drums, vocals), churn out precise, tessellating rhythms and infuse it with perfectly calibrated synth parts. Their sound recalls the warm, weaving tones of Stereolab and the kinetic energy of classic krautrock bands. In 2015, they released Maintain via Baltimore’s Ehse Records, and on Friday, in addition to playing Hassle Fest, they’ll also be releasing Towards the Shadow via Northern Spy Records.

Boston Hassle: How did you meet each other? And how did you decide to form Wume?

Albert Schatz: We met in Baltimore around 2005 when my former band (Bird Names) would play in Baltimore a few times a year. In 2009 April moved to Chicago and we started a music project to develop our skills in our respective instruments drums (April) and synthesizers (Al).

April Camlin: We both wanted to experiment with odd time signatures and polyrhythms and push the limits of our abilities further and it resulted in forming Wume. When Future Islands and Lower Dens hit us up to open for them at a Chicago show we decided to become a band and record our first demo.

BH: The name Wume is inspired by the band Faust, right? Their compilation The Wümme Years and the town where the collectively lived and recorded. Can you speak about the influence Faust have had on the group and how that’s changed since you first adopted the name?

AS: Indeed it is. I saw that compilation and for some reason, that name stuck in my head. I can’t say they are my favorite band from that era, but I love the freedom and experimentation of Faust. They made pop songs, noise, zone-out jams, proggy stuff. I feel like their influence has morphed into an appreciation of their spirit in not censoring yourself and focusing on new sounds/rhythms.

AC: We were also really inspired by the recording methods of bands like Faust and Can, having a recording experience be more like a residency and just experimenting a lot with doing things yourself.

BH: You both seem to have your hands in a few different projects, some not exactly musical—I guess I’m thinking mostly of April’s work with textiles. Can you talk a little about your non-Wume projects and how they shape your approach to Wume, if they do?

AC: I feel a very strong connection between drumming and weaving. Both actions are centered around embodied rhythm and can be executed without using any electricity. Drums and weaving are processes that have become industrialized in modern times but whose roots are connected to something very deep within human existence.

There’s an intersection of composition and intuition that plays out whenever I sit down at my instrument to write a beat or plan a weaving. I’m interested in what happens when a carefully fabricated structure is subverted, causing unexpected patterns to emerge.

BH: When I listen to your songs, I often wonder how the process begins and how you decide it should end it. It almost seems like you sift ideas from improvisations and refine them later. Can you explain how you go about writing songs and recording? Your polyrhythms are nuanced and are essential to your sound–how do you go about creating them and how might it be different from time to time?

AS:  Songs begin in many different ways and I feel like that is reflected on our new album. We’re always trying to get better at preserving that creative burst that first caught our ears instead of refining it to death. I used to write all the keyboard parts “by hand” on a piano and now I incorporate sequencers and rhythms boxes.

AC: A lot of times Al will bring something to me that he’s written, and I’ll try to develop a beat that goes against the part to create a syncopation. I’m always trying to write a beat that I can’t play at first and then slowly master it. Sometimes Al will write a crazy beat and we’ll spend an hour going over it as I try to learn it. We try to avoid being too formulaic in our approach to songwriting so that it stays fresh.

BH: The same week as Hassle Fest you’re releasing Towards the Shadow. Congrats! I’m looking forward to hearing it. How is this album different than your last, Maintain? And what were some of your inspirations going into it?

AS: Towards The Shadow is a lot wilder I’d say. It’s less “friendly kosmische” than Maintain.

AC: Thanks! This album feels a lot more introspective to me. I’ve been engaging deeply in personal transformation in the past several years and the lyrics are reflective of that space. I was profoundly impacted by the writings of Carl Jung and Herbert Marcuse amongst others and it felt timely to share their ideas. It’s also different because it’s the first full-length album we haven’t totally recorded ourselves, we worked with two engineers who are good friends, Jared Paolini and Josh Dibb. It was a good learning experience and I’m really pleased with what they were able to bring to the album.