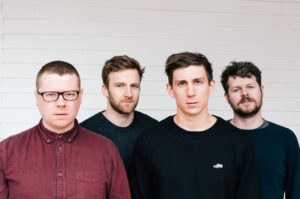 We Were Promised Jetpacks (photo by Eleanor Petry)

Glasgow rock stalwart We Were Promised Jetpacks is gracing Cambridge in July with the 10th anniversary tour of These Four Walls, the debut album that shot the band into the spotlight. I was lucky enough to chat with the band’s lead vocalist, Adam Thompson, ahead of this summer’s tour. But before I get there, it seems apt to give a brief history of the Packs, a band that has captured the hearts of indie rock fans since 2009.

These Four Walls was a spectacular burst onto the scene from a foursome that got their start at a high school battle of the bands. The album garnered international praise, finding its way onto the Billboard Heatseekers chart. Following the release of two more albums and an incredible live recording (a seven minute encore of “It’s Thunder & It’s Lightning!”), the band’s record deal with FatCat expired and they took a break to consider where they were headed after years of touring. After a long press of the reset button, WWPJ made a triumphant return in 2018 with The More I Sleep the Less I Dream. There are few things more exciting than when a band can recover from a period of drift with a confident statement piece. This context is all the more reason that this year’s anniversary tour of their first album will be a special one – both for the band and its fans.

Thus concludes my summary, and brings me to the real content: words from the frontman about the past, present, and future of WWPJ.

Boston Hassle: You’ve said that the band hit a crossroads when your record deal with Fat Cat ended. Now with a new deal secured, new music released, and another tour on the way, are you confident in the direction you’re headed?

Adam Thompson: We are confident about the album we made. I really think it’s exactly what we wanted it to be. I love all the songs and feel that they have their own distinct personality. I’m also pretty proud of the fact we got it out. It was a slog and we had to dig deep.

BH: What made you decide to do a 10th anniversary tour for These Four Walls?

AT: It’s probably our most well known album and we just thought it would be a fun thing to celebrate. We’ve been going solid for 10 years and it seems like an appropriate time to do a bit of nostalgia rock.

BH: How different does it feel to play through These Four Walls in 2019?

AT: We’ve been rehearsing recently and I have to say I’m really enjoying it. The work has been done and it’s been fun rediscovering how we played certain songs. There have been a few parts on the record that we don’t understand now, but it’s fun to reflect on those differences.

BH: Your last tour finished in December 2018. Have you been up to anything exciting in the in between, or is it much-needed time for a breather?

AT: One of us has helped make a little human and we’ve been trying to get a jump on writing the next album.

BH: We’re super excited that we get to catch you guys at the first stop of the anniversary tour, and we’re sure all of Boston is too. Any particular reason you’re kicking off the tour here?

AT: We like flying into east coast and then going all the way round and finishing east coast too. We have strong links to Boston as our Mr TM lives there and so all our gear is there as well.

Grab tickets for the show at The Sinclair on July 9th if you yearn for the comfort of 2009 or for the electricity of Scottish banter. Big thanks to Adam & the guys of WWPJ for chatting with us at Boston Hassle (and congrats on the little human)!