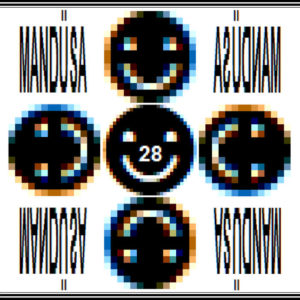 Listening to the Boston-based Mandüsa feels something along the lines of watching yourself drown.

The eclectic and often hilarious harsh noise outfit and (it seems) one-time Dr. Zhvymlnskvk collaborators have flooded the Boston soundwaves this month with a string of daily releases, each never falling anywhere under twenty minutes of void-like circuit-bending and fully arresting screeching cacophony. So perhaps this is a over-/review of their whole set of November  releases.

But in short, they don’t get old. With each release, with each new Mandüsa piece played, they somehow end up penetrating a new corner of sonic capabilities one didn’t even know existed. Layers upon layers of decayed and distorted audio interwoven with what sound vaguely like samples, melodies, vocalizing, speaking. Their sound continually impresses—in both the docile and more coercive senses of the term.

And their humor: the sounds (and release style, along with their busy album covers) are coupled symbiotically with their tongue-in-cheek titles: “Goiter Loiter” on 11.28.20, or “Look Mom I’m In a Black Metal Band” on 11.19.20. It all evades description. Just go listen to their latest installment in the series. It is truly Sound sui generis.

The cleverness of this whole approach, beyond linear notions like exposure and marketing, etc., is that this is exemplified DIY ethos crossed with anti-capital maneuver. Not only does Mandüsa eschew label releases and (using this word again because apt) flooded the scene with their music, they have coupled this approach with intense and often off-putting harsh noise, at once flouting the form and content of the major-label capitalist-bureaucratic approach to music creation and distribution.

The perfect solution to an age in which it is increasingly difficult to escape the bureaucratizing presence of communicative capitalism: The scariest thing to a capitalist is someone who doesn’t make sense. And Mandüsa are deft nonsense-makers. Flood the airwaves with noise, short-circuit our modes of desire, destroy sense-making capabilities and wait for revolution to come.

Perhaps, though, this anti-capital theme may just be a reading-into. However, I am a strong advocate of the sound-as-dismantlement tool approach. Noise must be the axe for the frozen sea late capitalism has congealed within us.

Then again, this is about all I could gather from the artist’s sparse online presence. Certainly, however, Mandüsa is a growing force in the mounting behemoth of Mass. anti-capitalist sounds.