It’s around 7 in the evening and my partner, Tyler, and I are in a gas station somewhere in Northeastern Kentucky.  We’re reaching the end of an argument familiar to most roadtrippers. It goes something like, “you’re moving too slowly,” “quit nagging me,” “you forgot to pack x, y, and z,” “it’s your fault”, etc.  As the sun sets and a feeling of helplessness sinks in, it begins to dawn on the both of us that we need to wrap this little shit-fit up if we want to make it to Cleveland before 1am. Thing is, we’re both feeling miffed and sore and neither of us want to get back in the car with someone we’re secretly growing quite sick of.  I sigh heavily and look around- we’re on some stretch of highway not noteworthy enough for a name. Back where we came lies nothing. Straight ahead bodes tedium and tension. Across the street is a Waffle House.

Late chef/writer/TV personality Anthony Bourdain once called Waffle House “an irony-free zone, where everything is beautiful and nothing hurts.”  It was in his Charleston, SC episode of CNN’s Parts Unknown that Bourdain famously visited the Southern breakfast chain for the first time. As a man known for having an iron stomach and a love of “other” meats, it was cathartic to see someone of his stature lose his shit over countertop grits and pecan waffles.  His delight in the peculiar hash brown-ordering vernacular (I’m talkin’ stacked, smothered, covered, and chunked) was so infectious that it’s considered one of the crowning moments of the series.

Tony had a way of exalting the familiar and making the obscure into a comfort.  Waffle House is, perhaps, a little bit of both of those things. It’s a bizarre American in-joke that millions are aware of, but few talk about with the regularity of, say, McDonald’s or Dunks.  I’d been going for years, whenever the chance arose, but since I saw that episode, the place is now and forever inseparable from him. I like to think that he haunts every single one.

Tyler and I slide into our vinyl booth and order a mess of homestyle grub that probably comes to our table by way of a vacuum-sealed bag.  As we eat, we’re lulled into that patented comfort that Tony once called “marvelous,” and the irritation of just a few minutes earlier fades into white noise.  Somewhere in France, at this exact moment, there is a noose around Tony’s neck.

I didn’t read much of the headlines back in the summer, and I can’t say they interest me now much more than they did then.  I think that, even if CNN was to find some manifesto of his that answered every single question, it still wouldn’t be worth a click to me.  After the initial shock wore off, I sat on the air-mattress in our Cleveland AirBnB and stared at the ceiling for a long time, trying to conjure tears.  They were stuck somewhere behind a secondary shock: We dedicated this whole trip to a man who had taken his life last night. There was heavy portent in the air- much more than a life was lost.  A mindset was silenced, and a mission had been aborted.

Since I am not a member of his family or a close friend, I am allowing myself to think of things this way instead of facing the grim reality of a “senseless tragedy.”  To me, a writer and a stranger to him, I saw an extraordinary and unusual American who lived without fear; who, despite a brash demeanor, possessed a heart full of goodwill, and who had entrusted his audience with the propagation of these virtues.  His absence is an absence of grace and acceptance. It’s an affirmation that things are indeed very grim these days.

We, as a nation, are shamelessly apprehensive of the unfamiliar to the point where we grow bored and loathsome of exploration itself.  This mentality is certainly at its most vitriolic and destructive when aimed internationally. However, we too misinterpret our own country to the point of detriment.  Whether we see it as teeming with Others who threaten our Ways of Life, or as filled with a sea of small-minded idiots, we cannot help but misunderstand what exactly goes on in America:  Who lives here, what these people do, how they think, and if they’re anything like the presumptions we’ve made of them.

I didn’t travel much before this trip.  In fact, this past summer was the first time I ever hit the road for an extended period of time.  There is a known fact of travel that has always perturbed me: The inevitability that, in some way or another, one loses control of one’s surroundings upon entering unknown terrain.  My reasons for avoiding this conundrum are my own, but I do think it reflects a larger mindset of the American that Tony tried to grapple with. When you travel, and you lose your control over your surroundings, you cannot save your assumptions from being challenged.  His show was a good introduction to this inevitability. Or, at the very least, it’s thanks to him that I wouldn’t bat an eye if I saw someone tucking into a big bowl of cow guts.

The show wasn’t for xenophobes, though.  Tony’s goal was not to change the mind of every bigot, big and small.  Instead, he sought to challenge people who already possessed goodwill for the world, but who harbored unchecked hypotheses and prejudices, and who didn’t have any other means of challenging them. 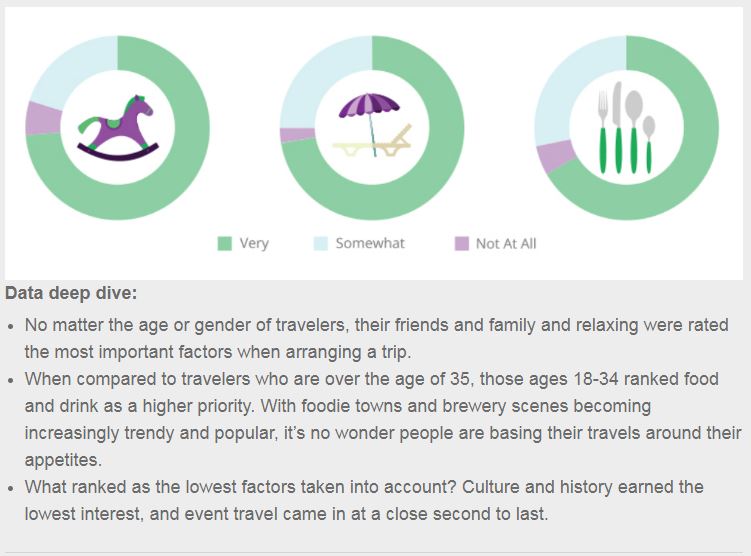 While it’s true that Americans are astonishingly ill-versed in global knowledge (which NatGeo expands on in gruesome detail), it concerns me that the diversity that exists within America will continue to be either willfully or unwittingly ignored until it’s too late.  Last year, Expedia.com released a report of aggregate data that showed that the last-place reason for American travel was “culture and history.” The first and second: Visiting family and relaxation, respectively. This reinforces the American quest for the familiar- we work hard and often, and we don’t make a ton of money.  When we get the free time and resources, we want to relax with our loved ones, not wander around night markets in Bangkok or dive bars in Trenton. We wind up seeing a lot of beaches, but not a lot of people. Some of us do this every year, and some of us will do this until we die.

When I was a little girl, my mom told me frequently that America is a country like no other on Earth.  “You go to Poland,” she’d say, “and everyone there is Polish. Go to Mexico and all the history is Mexican.  Go to Kenya and all the food is Kenyan.” While this has never been strictly true, and grows less true over time, Americans do have an enormous advantage as a nation of immigrants.  No matter where you go, there is no overarching uniformity. We cannot help but represent foreign colors, flavors, and ideas at each street corner. While there will always be those who try and suppress this, they could never accomplish an order out of such rich chaos.  It’s something that makes domestic travel in search of culture, in search of the new and the weird, so alluring. Neither an army of Trump supporters nor Tony’s death can change that.

The rest of the road trip was strange.  I felt as if I’d triumphed over an old subconscious fear in exchange for the life of the person who helped me get over it, and in a few hours, the tears were ready to fall. Tyler drove while I cried through the Rock and Roll Hall of Fame, and Niagara Falls, and countless miles of highway.  I cried when I got home, cried all the next week, and still cry today.

I’m comforted by old episodes of Parts Unknown, but only when I can bear it.  While I love it when Tony talks about economic hardship to fishermen in the Greek isles, or gets lost on the dizzying streets of Seoul, I have an abiding fondness for the episodes that take place in the U.S.  The colors are the same, and so is the language (for the most part.)  But it’s here that Tony tries the hardest to show the wild uniqueness of humanity, the benefits of straying from the known, and the universal currency of goodwill.  I wish he could have stayed alive to see the end of dark times, because, through him, I am convinced it is coming. Until then, I urge you, dear reader, to challenge your sense of comfort as much as you can, and to treat each new terrain with the wonder and astonishment of Anthony Bourdain in a Waffle House.