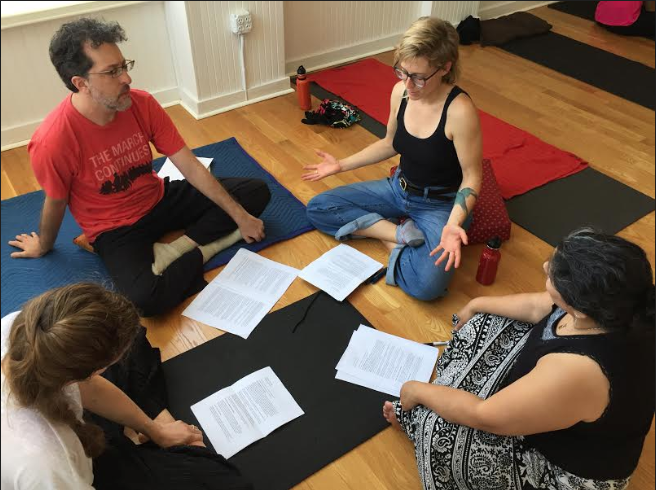 How bad is your writer’s block? New York playwright and director Madelyn Kent is bringing Sense Writing to Cambridge this weekend for a two-day workshop and it might just be the approach that’s been alluding you. Sense Writing has been called “yoga for writing,” and it’s no surprise that the workshop takes place at Art and Soul Yoga or has been written up in yoga publications as well as literary journals. Kent has about 100 gentle exercises that she weaves together with writing prompts to get your creative juices flowing again. Cambridge, which has no shortage of writers and yoga practitioners, might be the ideal place for such a workshop. Still, skeptics will appreciate the endorsement Kent has drawn since founding Sense Writing in 2012.

The link between the articulate movement and the flow of writing is often not readily apparent. In fact, at times they are at odds. We go to yoga to escape the mind’s chatter and hope for that divine creativity to awaken through exertion and through breath. But Madelyn has a different approach to calling upon this ghost of creative flow. She’s asking us to simply try less. To let spirituality and creativity separate and not be so hard on ourselves. She offers a space where people can give themselves permission to slow down and draw awareness to subtle movements of the body and by doing so reawakens a fascination with the world, both on and off the page …Turn off the chitter-chatter of the mind, breathe, focus, let go and run with the words that come.

Art and Soul Yoga is at 91 Hampshire St., in the Wellington-Harrington neighborhood not far from Inman and Kendall squares. Information is here.

Presented in collaboration with Storefront for Somatic Practice, dedicated to the exploration of everyday movement, its foundation in childhood development, and its role in the arts.