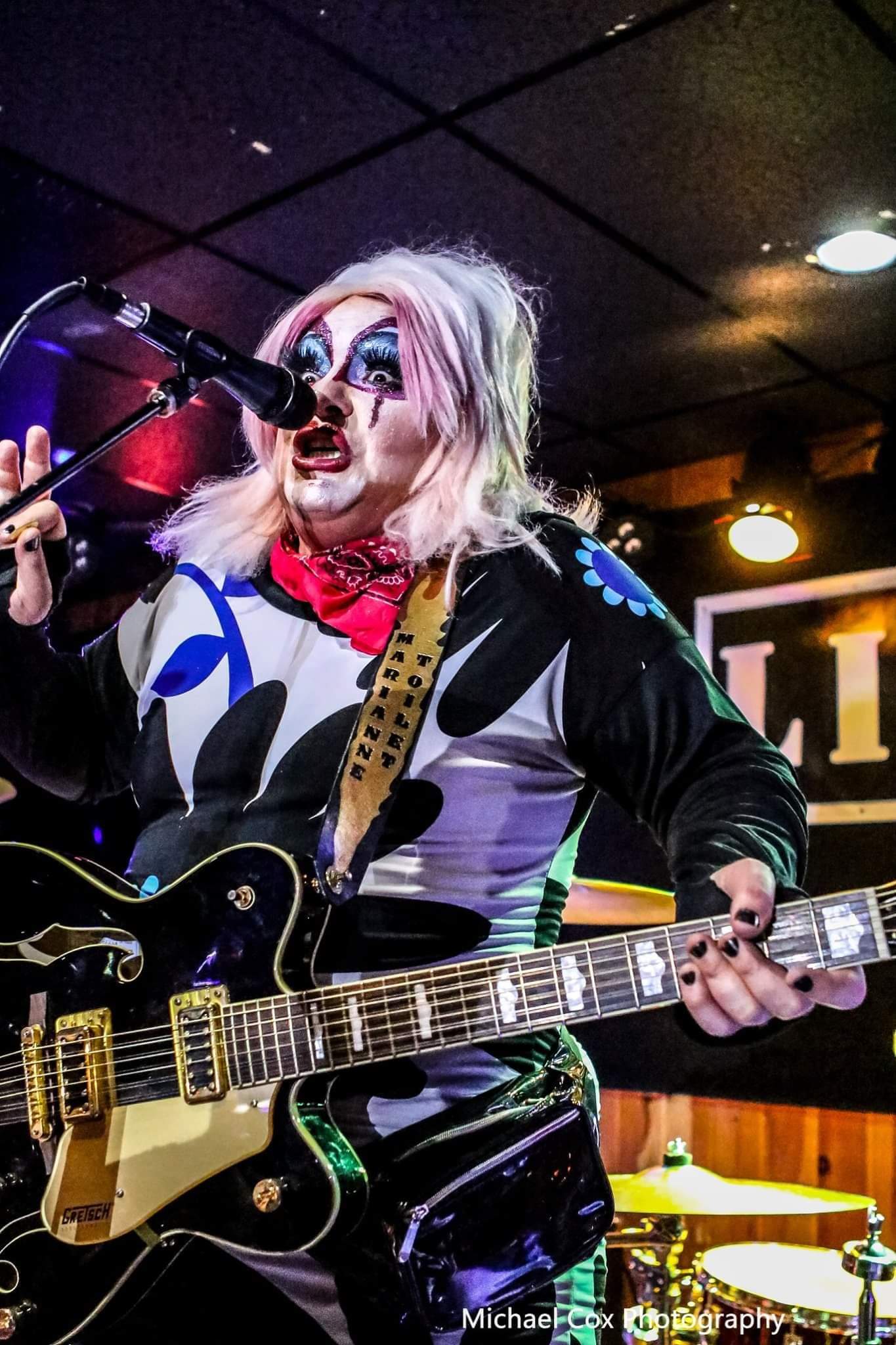 Marianne Toilet and the Runs music is like one of director John Waters’ wild characters performing The Mentors’ music. Though, instead of heavy punk, Marianne Toilet plays sunny, comedic tunes with a lot of sex-related topics.

Marianne Toilet and the Runs formed in 2012 in Salem, Massachusetts as the comedic, drag queen, brainchild of Marianne Toilet. They have been playing music together as a band for over 10 years, and their debut album, Eargasms For Your Genitals was released in 2016. The band is still producing music to this day, and their animated music video for “Don’t be Afraid” was released last Friday, July 29, 2022!

Their songs are catchy, feel good, chock-full of ‘hush hush’ topics that aren’t for the easily offended, full of toilet and drag humor. Some people just can’t take it — as you will learn in this interview.

I had the pleasure of asking the creator of this joyful group some juicy inquiries:

HASSLE: Tell me about the night of Marianne’s conception?

Marianne Toilet: I originally began as a comedian in Boston for a number of years. Around 2011 or 2012 I was living in Albuquerque, New Mexico, and doing stand-up, which was becoming more and more musical. I was asked by fellow comedians if I would be willing to perform in drag to join an all-female comedy show at a rock club called ‘Low Spirits.’ At this time I was also living with one of my dearest friends, Bradd, who is also a drag queen, named Chastity Belt-off. I asked him and some other friends to help me with the creation of this drag persona. Bradd and I conceived the name ‘Marianne Toilet’ (though Bradd was really pushing for Urethra Franklin). Marcus Montoya, who was in the original New York cast of Repo the Genetic Opera, did my makeup for the first time, and Patrick Ross, a professional Joan Rivers impersonator, helped with Marianne’s first costume and wig. To cut an already long story short, after doing that show I immediately knew Marianne had to be my art, my comedy, my music, etc. When I moved back home to the Boston area, I decided I wanted to turn my comedy music into a band and got to work making it a reality!

HASSLE: What is your musical background?

Marianne Toilet: I’ve always played music. I started playing piano when I was 4 years old, guitar when I was 8, banjo when I was 14, and really started writing music when I was 15 — mostly on guitar. I also almost got a double major at Salem State University, and when I got my masters degree I wrote a Melodramatic musical called The Chauvinist. Music has always been there.

HASSLE: Is Marianne based on anyone?

Marianne Toilet: Not really. I love playing with gender identity, definitions, norms, and twisting them around. I kind of adore playing a hyper masculine ‘bro’ when I’m all gussied up and feeling pretty! I love the way the look and the act play against each other! I also love mixing forms of makeup art — like drag meets clown!

HASSLE: What is your passion aside from music?

Marianne Toilet: Comedy comedy comedy! I love to make people laugh! I love using comedy as a tool to discuss real issues in the world. There is nothing like knowing people’s days or perspectives can be changed by my silly songs and how I make them feel.

HASSLE: What is the songwriting process for you?

Marianne Toilet: It’s kind of all over the place. Sometimes I’ll just be joking around with friends and a silly idea starts becoming an idea for a song. I sit down and get to work on it. Other times I literally wake up with a song in my head almost fully formed! Very often I conceive ideas in the shower or on the toilet, which seems pretty fitting.

HASSLE: Who are your biggest musical influences?

Marianne Toilet: Too many to name! Definitely The Who’s simple but driving rhythms, Tom Lehrer is certainly a comedic musical genius, The Tiger Lillies have been very inspiring, and they’re such nice guys. The list really goes on, and on. And Bonnie Tyler. There, I said it.

HASSLE: What kind of shit have you had to deal with performing as Marianne?

Marianne Toilet: So much! A lot of people jump to conclusions and assumptions about me and my sexuality. Radio stations seem to be unwilling to play our music (at least in Boston, there are some great internet shows like Punky! Radio that have been extremely supportive). Some people think it’s totally fine to fondle me, grab my ass, touch my wig, etc. Then on the other side, there are many people that think it’s okay to say truly offensive jokes to me. To be fair, I understand that I have a very different take on what is and isn’t offensive, but when I sing a song about sex and someone thinks that makes it okay for them to tell me a joke about Black people, let’s just say it can get very uncomfortable.

HASSLE: How long did it take before people started following you or was there a following already from a previous music venture?

Marianne Toilet: We definitely started from the ground up — nobody knew who we were, or what the hell we were doing. At our first show, it was very clear very quickly that people were taking notice that something new was happening. With that being said, in the beginning there were a lot of ups and downs, where some people in crowds became instant fans while other people walked out appalled by our message and humor.

HASSLE: Who is your biggest supporter?

Marianne Toilet: That’s a tough one actually. Bradd — my drag queen friend from Albuquerque — is still very close to me and we love supporting each other’s art. I have great parents who still come out to shows and love playing along with my jokes. Honestly, I’m always shocked to discover the truly biggest support, like random people I never knew who want to talk to me about the show! For example, last night I met someone named Joy who had followed the band for a long time, but until last night had not seen us live. She was so excited to tell me what she thought now that she saw the show, and what she thought of our music. It was invigorating and truly felt special. This happens all the time!

HASSLE: What are the most important messages you want to get to your audience through music?

Marianne Toilet: This is going to sound a bit weird, but a lot of people think that I am trying to play with taboo topics and to shock people, but I never thought that. My humor was actually very carefully constructed based on the notion that I believe sex is a universal topic, we all generally can see there is something very funny about the act itself, and it’s also a topic that we all should really talk more about. People can be so scared to share their desires, open up about their own sexuality, address the negative sides of misogyny, homophobia, women’s rights, etc. I write songs to shine lights on these things. Some of my songs are clearly just making fun of a topic, others tell true stories people have shared, and some songs are literally character pieces to reflect some terrible ways people might think or act. Hopefully the big message people get is that it is okay to talk about sex, and beyond anything you are sexy and have every right to own your dynamic sexual self!

HASSLE: What are your music goals?

HASSLE: What was your best show?

Marianne Toilet: I don’t think I could pick just one, but I’ll tell these two stories that make them very memorable highlights. The first was at Gemstones in Lowell, Massachusetts. The show itself wasn’t great; our drummer at the time was really struggling and the set was a bit rocky. With that being said, a very sweet woman came up to me after our set, hugged me and cried, explaining that her baby’s father had recently died. She just cried and told me “I really needed that.” Making her laugh was truly important for her and I walked away from that show feeling like I really helped someone. I still think about that night. The other was at KC’s Tap in Pawtucket, Rhode Island. When I walked into the gig the only person there was a clearly racist Nazi. He had swastika and SS tattoos all over his head, neck, etc. As you can imagine, me being a drag queen — and Jewish — I was very nervous about playing that gig. At the end of the show he came up to me, explained that he did have very hateful feelings about me when I walked in, but our set made him laugh and rethink who we are and his own prejudices. We talked for a while and he was actually a really nice guy who couldn’t afford to get those tattoos removed, but had been working for a long time to be a better, less hateful person. It was a great conversation and I think we both walked away feeling great about the whole night. Plus that night was my first time playing with the Excrementals, and I just love those guys!

HASSLE: What was your worst show?

Marianne Toilet: Easy, Feb. 7, 2014 at Club Bohemia in Cambridge, Massachusetts. My bassist was sick with strep throat and thrush. It was so amazing that she still showed up to play, but clearly couldn’t sing that night. Naturally I tried to really amp up my singing to compensate for the lack of her voice. At this time I regularly smoked cigarettes and I blew out my voice halfway through the first song. The place was pretty packed and I watched more than half the crowd just walk out. I never had another cigarette again after that night. In that way maybe you could call it my best show!

HASSLE: Who would you absolutely love to share a show with?

Marianne Toilet: I would love to play with The Tiger Lillies, it could be incredible to be a part of a musical comedy event with outstanding musicians like Weird Al Yankovic, Tim Minchin, Tenacious D, The Lonely Island, Stephen Lynch, Demetri Martin. This list can go on for days!

HASSLE: Where do you see yourself in 5 years?

Marianne Toilet: Pipe dream, on tour playing to crowds for a career. I never cared to be rich or win awards or crap like that, but I’d love to play music professionally. I’d love to do something where I get to cross over with sex education — here other groups can sell sex toys, and sexual counselors can come educate people, etc. It would just be so cool to use my sexual humor as a tool for good.