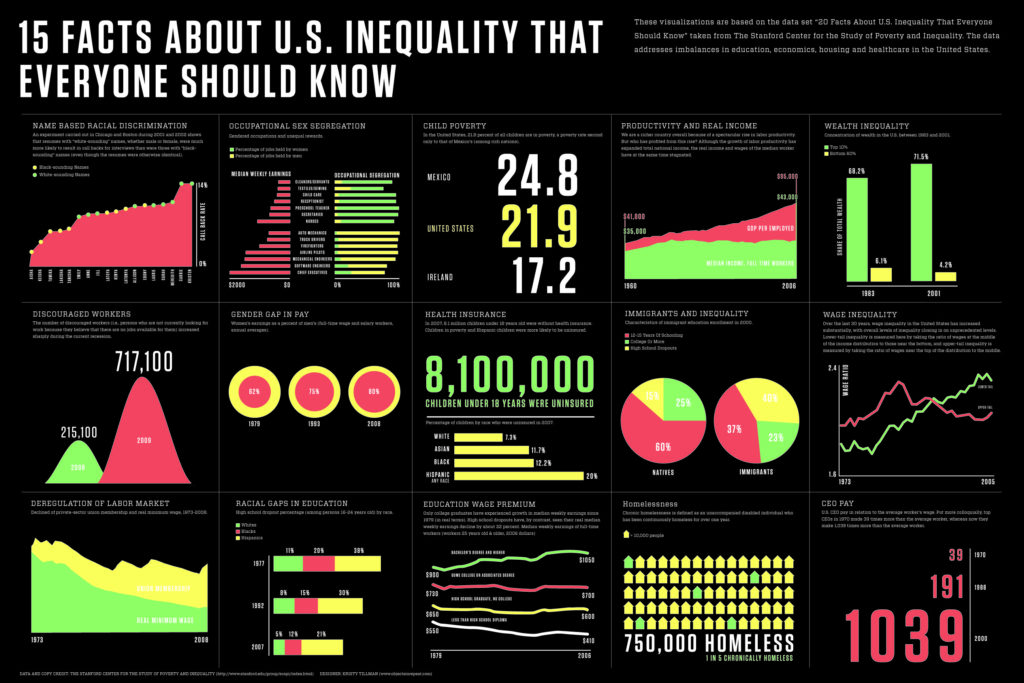 Credit: Taken from information provided by The Stanford Center for the Study of Poverty and Inequality, the graphic–by Kristy Tillman

For this week’s letter, I would like to seriously talk about income inequality in the United States. I am assuming that if you are reading this newsletter (barring trust fund kids who start an indie band) that income inequality impacts you. You’re poor, I’m poor, they are poor, everyone is poor; no more than a few paychecks away from living in a tent in the woods, and joining the 567,715 people who experienced homelessness on a single night in January 2019 or according to another report, 750,000 people on any given night.

And then there is, and I hate the fetishization of wealth, or really even mentioning this assholes name …. ever, but Elon Musk who is worth over 70 billion dollars and wants to colonize Mars. Sigh. His father owned a mine in Zambia and was a millionaire before he was thirty, his mother is a professional model. Musk grew up in Apartheid South Africa as well as Canada after his parents divorced.

Musk, his mom, and brother had a tough time in Canada after the divorce and had no money when they arrived in Canada (but Musk was able to skip out on military service in South Africa by doing so). Musk even had student loans (over 100k) after he graduated from college as he has claimed on his twitter.

But let us step back and see what Musk had up until this point. He was 1. white, 2. male, and 3. well educated. Musk went to Pretoria Boys School, a private boarding school that costs close to 8k US Dollars per year for room and board. Well educated indeed. He then went on to Queen’s University and the University of Pennsylvania where he graduated with a dual degree in business and engineering. But to get to this point, he was afforded pre-existing privileges that many other folks simply do not have.

For more shit talk on Elon Musk, peep this Reddit thread. I need to get on with this piece but in case you don’t click that just know that he stole the Tesla Company from the original founders and didn’t even come close to coming up with the original idea.

Now, as recently as 2015, it was reported by the LA times companies owned by Musk have received over 5 billion dollars in government subsidies and due to the COVID pandemic has received a $465 million dollar loan from the federal government, yet Musk does not want another government bailout for millions of Americans struggling with housing and food security or close to 1 in 10 Americans who are now unemployed. 1 in 5 children in America lives in poverty. In fact, on average, it takes 8 generations for a low-income American to rise from poor to an average income.

All the while we, essentially anyone who is not a part of the 1% are being led to an early grave. The New Republic reports that, on average, poverty leads us to an early death where the poorest men die 10-15 years earlier than the richest men and the richest women outlive the poorest women by 10 years.

And now, in case you cannot fill in the lines with what is happening in Florida or any other state experiencing a spike in COVID cases yet are still under-going reopenings and plan to re-open schools (though there seems to be some political waffling here as of late) it certainly feels like, to me, that the ruling classes are marching the poor and working classes to their death. All of this is in the particular light of the raging debate if the government will extend the $600 per week unemployment benefits, but yeah sure give TB12 a million-dollar loan or you know, $135,000,000,000 in tax breaks to millionaires, three times as much money than was given for housing and food relief assistance.

Meanwhile, my broke queer self is counting pennies to make sure I have enough come tax day next year, since all the money coming from the CARES act and the one teeny-tiny stimulus check, and whatever state assistance I was able to scrape up, will be taxed at 20%. Fox Business (of all places) cites the entire corporation of Amazon as having a 2019 tax rate of 1.2%.

Tax the rich, maybe don’t eat the rich, that might be a bad plan but definitely tax them.

"Harris is a perfect example of how someone’s identity does not prevent them from partaking in iniquitous malpractice, and in fact can provide a perfect cover for perpetrating them."

THE JONATHAN RICHMAN FILES, VOL. 1: AT THE GOVERNMENT CENTER

“Our lives are on the line”: COVID-19’s toll on preventable overdoses

CW: Opoid use and overdose