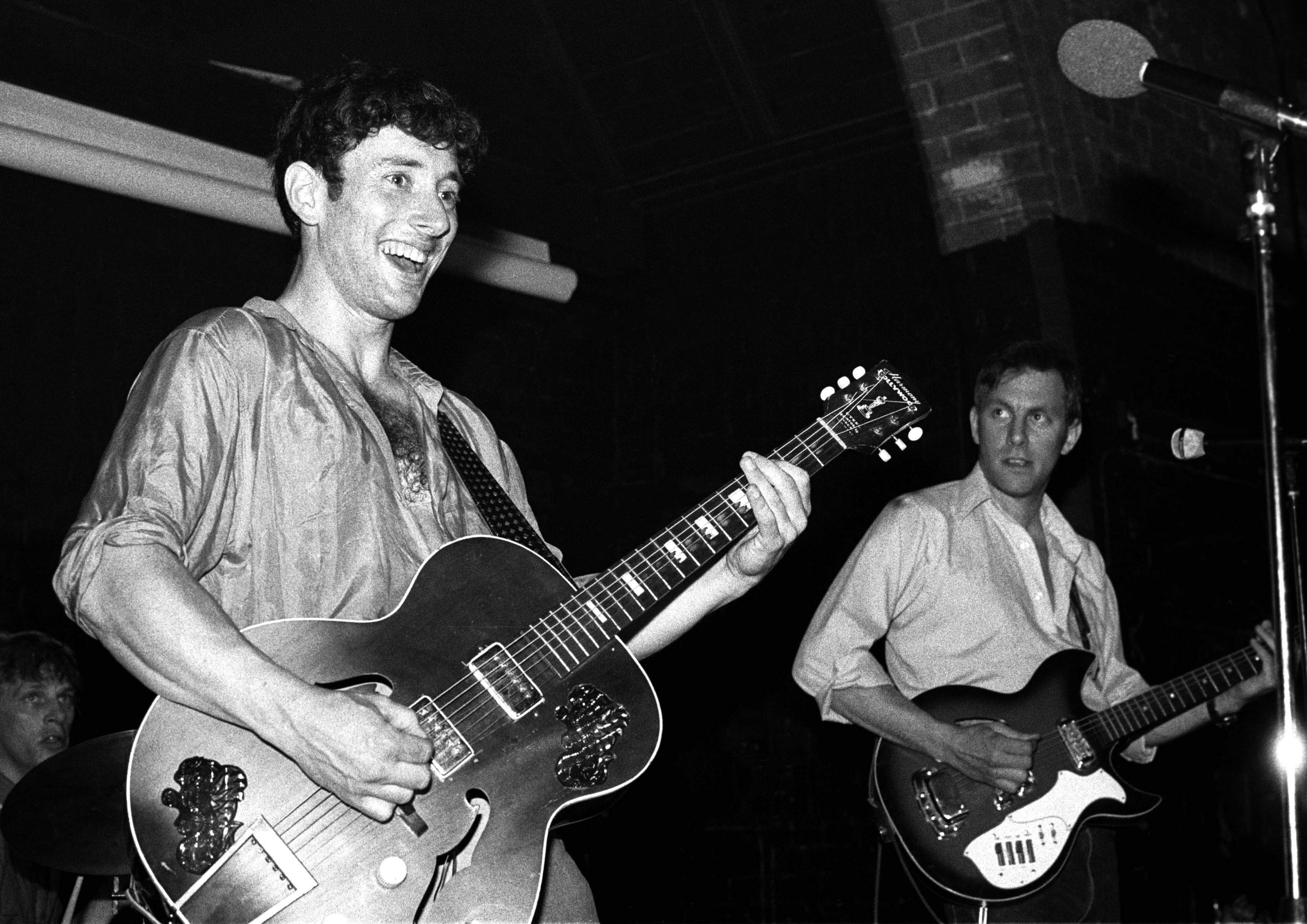 Jonathan Richman, the frontman of The Modern Lovers, is nothing if not sincere, which can make his love songs to Boston a little head-scratching. Take, for example, his declaration on “Roadrunner”: “I’m in love with Massachusetts!” I mean sure, me too, but you don’t hear me going around shouting it.

Nowhere in his extensive discography does Richman focus more on the city we love to hate than his debut album, The Modern Lovers. As a band, The Modern Lovers formed in 1970. The group seemed to herald what would become of rock — their drummer, David Robinson, later joined The Cars, and Jerry Harrison of the Talking Heads played the keyboard. Recorded in 1972 but shelved until 1976, the group’s self-titled debut is the first and last complete document of Richman’s proto-punk angst. He’s single, incapable of talking to women, and nostalgic for the ‘50s, an era despised by his peers. You can hear this on “Government Center,” his weirdly conservative (though mostly just naïve) ode to the post-war business boom and the women it employed. What does Government Center―that brutalist, apocalyptic plaza―look like through Richman’s eyes…and what does he fail to see?

Is Jonathan Richman always serious? Never serious? On the one hand, I’m not sure he’s capable of sarcasm, but on the other, can any of this be real? Listen to “Government Center”:

At face value, Richman is praising clerical workplace culture―its mundanity, its repetition. He describes a typing pool, secretaries sitting side by side jotting notes and handling mail. What on earth is rock and roll about that? I couldn’t tell you. But that’s what makes it punk in the truest sense. It’s one big F-U to the status quo, a celebration of the absolutely uncool. 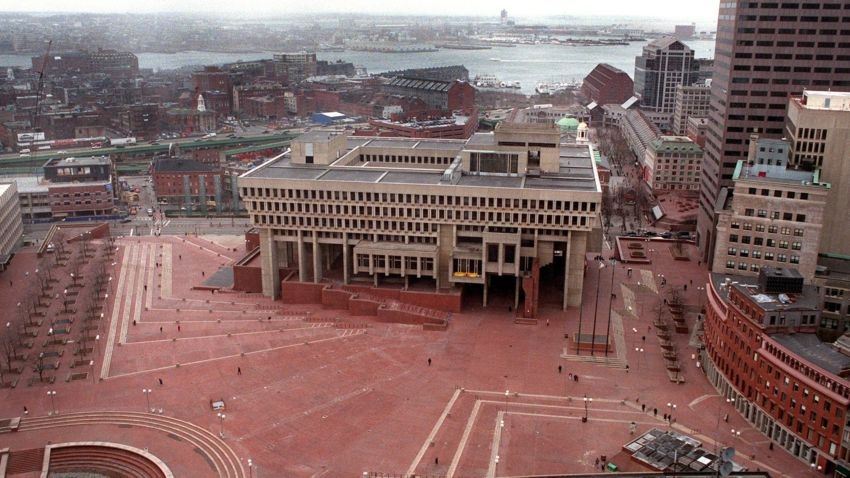 ©John Tlumacki for The Boston Globe

Government Center, a thriving business district, didn’t always exist, nor was it particularly popular. It was a product of Richman’s rose-colored ‘50s, a time of development in Boston. As Massachusetts’ manufacturing jobs dried up after the war, politicians started searching for new sources of business.

In 1950, Boston’s population peaked. The city was overcrowded. Under the guise of ‘urban renewal,’ working-class residents—primarily African Americans, Italians, and Jews—were forced from their homes with wrecking balls breathing down their necks.

Before Government Center was Government Center, it was the West End, a neighborhood home to 20,000 people. By the end of World War II, the West End was a struggling, working-class community. It was also home to Scollay Square, known to some as a red-light district. City officials wanted to characterize the area as a slum, a term refuted by West Enders. Scollay Square’s apparent disarray was largely a product of city policy. Boston had stopped collecting trash and cleaning the streets, leaving the neighborhood to rot.

The Housing Act of 1949 emboldened city governments to reimagine their cities, putting business interests before the lives of working-class people. It funded public housing and supported mortgages, but it’s largest impact in Boston was urban renewal.

Throughout the ‘50s and ‘60s, city officials razed the West End,—and, slowly, the South End—replacing well-established communities with shiny new buildings. Although residents were promised new housing in their old neighborhoods, this never came to be. Instead, people were forced to pay higher rent in new areas, making way for high-rise apartments.

With $40 million in federal funding, the Boston Redevelopment Authority (BRA) demolished over 1,000 buildings in the West End. In its place, the city constructed the brutalist wasteland we call Government Center, home to Boston City Hall, City Hall Plaza, and the Government Service Center.

Designed by the architecture firm Kallmann, McKinnell, and Knowles, City Hall was finished in 1968, when Jonathan Richman was a teenager busking by himself in the Boston Common. Although praised by critics at The Boston Globe and New York Times upon completion, City Hall and its modernist style soon fell out of favor, and by the late ‘70s, the building already felt dated. (Marty Walsh ran for mayor advocating for City Hall’s demolition. Still, it stands.)

The concrete monstrosity that is City Hall draws the most criticism. It’s unwelcoming, a constant reminder of government power — the power to remove people from their homes under false pretenses, to place ‘progress’ over wellbeing. Although the architects saw democratic values in Brutalism’s simplicity, City Hall Plaza has failed to be a gathering place. Most of the time, it lies hauntingly vacant, a strange, urban desert.

This is why Richman’s “Government Center” feels like such an anachronism, a celebration of what was already out of favor. He sings with rockabilly jolliness, a ‘50s gung-ho Americanism that also led to Government Center’s creation. Richman’s mistake is a common one: he drank the kool-aid. He loves Massachusetts. He loves Boston. Viewed from the right vantage point—a suburban, middle-class vantage point—Government Center’s construction signified an attempt to revamp and celebrate Boston. Scollay Square and its working-class residents were irrelevant if not invisible from this perspective. Richman was not ‘woke’. His love for America, in the midst of the Vietnam War, was incomprehensibly unhip. In his punk contrariness, he boasted about his love for his hometown. To him, this was punk. To us, anything but.

And no, I don’t fault Richman. He’s a weird dude. He grew up down Route 9 in Natick, an old New England town continuously suburbanized by the post-war economic boom. He’s nostalgic for an era he hardly lived through and doesn’t understand. So while Richman’s heart may be in the right place for wanting to entertain all the worker bees downtown, his portrait of Boston ignores history in favor of facade.